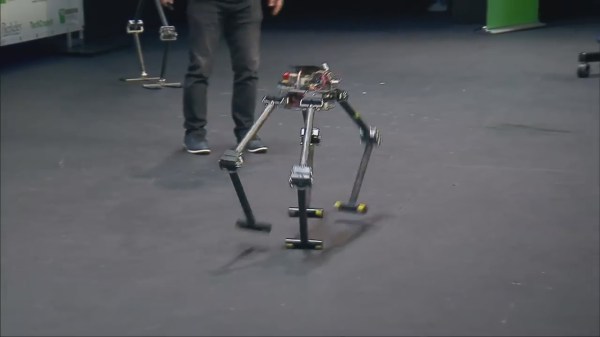 Despite the success shown in prototypes from groups like Boston Dynamics, bipedal walking is still really hard to implement. When the robot lifts one leg, it has to shift its center of gravity over the other leg to avoid falling sideways.

The Autonomous Legged Personal Helper Robot with Enhanced Dynamics (ALPHRED) is getting around this problem by coming at it from a different angle. ALPHRED walks sideways and throws away the distinction between arms and legs.

The bot is RoMeLa at UCLA’s latest evolution in their approach to traditional bipedal roadblocks. Sideways walking is something we covered when we talked about their previous version, NABi, which had only two legs. ALPHRED expands that to four limbs. As the video below shows, all four limbs can be used for walking using either a wide, stable sprawl or the limbs can reorient to a narrower dog or horse-like stance for faster running.

Beyond walking, one or two of the limbs can be put to use as hands to open a door or hand over a package, which is why they refer to them as limbs instead of legs or hands. Only an animation is shown of that configuration but RoMeLa is a robotics lab which we keep an eye on so we’ll let you know if they demonstrate it.

The video goes on to show a neat actuator with active compliance which they call BEAR, Back-drivable Electromagnetic Actuator for Robots. A search turned up no further details but let us know in the comments if you have any. We also liked seeing how they use a speaker to give a rough idea of the amount of current being drawn. While it’s both practical and a hack, it also adds a nice sci-fi touch.

END_OF_DOCUMENT_TOKEN_TO_BE_REPLACED

We humans walk funny. Pivoting one leg forward at the hip creates an offset that puts us off-balance sideways. We have to compensate for this with each step we take. Many robots handle this by instead taking small, calculated steps. Enter NABiRoS, the Non Anthropomorphic Bipedal Robot System (link to the video below). The ‘Non Anthropomorphic’ means that it doesn’t walk like a human, and yet the ‘Bipedal’ means it still walks on two legs. The difference is that it walks sideways.

Here’s how the folks from RoMeLa (Robotics & Mechanisms Laboratory) at UCLA did it. Imagine you rotated both your legs 90 degrees such that they were facing in opposite directions. Then you rotate your upper body 90 degrees to face one of your legs. You can now move your legs to walk in the direction you’re facing and there’ll be no more tilting sideways each time you take a step. The joints are also simpler as only a single degree of freedom is needed in each of the knee and hip joints. The ankles and feet are done with a compliant, or an elastic, joint much as you see with a lot of prosthetic legs. As you can see in the video below, in addition to walking, they can do some surprisingly active things such as hopping up and down and what we can only call skipping. In fact, the result is sometimes very human.