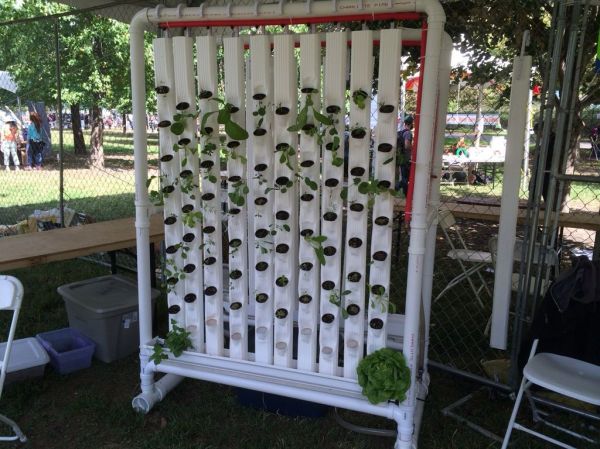 Now there is no excuse to not have a garden, even if you are located in an urban area. The Robotic Urban Farm System (RUFS for short) solves the problems of growing many plants in a small area. The system’s high plant density is attributed to its vertical orientation. The entire system is even made from easy to find parts from your local hardware store. The water usage is kept to a minimum thanks to the closed loop watering system. Instead of flowing down into the ground, any excess water is collected and saved for use later.

Plants are placed in holes made in the side of a standard plastic downspout that hangs from a PVC frame, each hole several inches apart from its neighbor. A standard plastic plant pot is place inside each hole and is filled with hydroponic media. That’s right, there is no dirt in this system. Plants will grow happily in the hydroponic media providing they get all the nutrients and water they need.

The potential urban farmer may not be super excited about tending to his crops. This is where the robot portion of the RUFS system comes into play. There are two control systems that work independently of each other. The first is for indoor applications and controls light cycles and circulation fans. The second is a little more complex and controls the watering portion of the system. Not only does it water the plants at pre-determined intervals but it also monitors the pH, nutrient and water levels inside the reservoir. Both these systems are Arduino-based. For extreme control freaks, there is one more add-on available. It’s Raspberry Pi based and has an accompanying mobile app. The Pi records and logs sensor data from the Arduinos and also allows remote updating of the watering and light schedules. The mobile app lets you not only look at current conditions of the system but also displays the historical data in a nice visual graph.