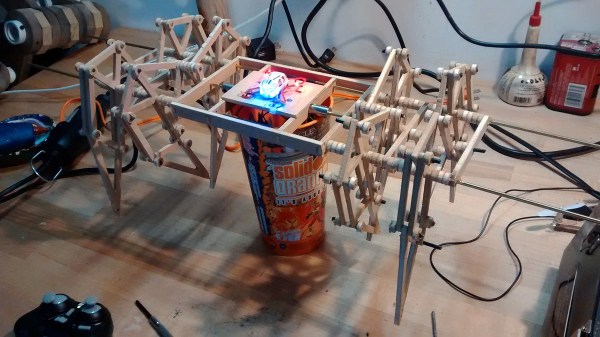 [Jeremy Cook] has been playing around with strandbeests for a while, but never had one that walked until he put a motor on it and made it R/C controlled.

These remote controlled strandbeests can’t be too heavy or they have trouble moving. He didn’t want to get too complicated, either. [Jeremy] decided his first idea – hacking a cheap R/C car – wouldn’t work. The motors and AA batteries in these cars are just too heavy. Then he realized he had a broken quadcopter lying around. The motors were all burnt out, but the battery, controller, and driver board still works. On a hunch, he hooked up beefier motors to the front and left rotor control, and found that it worked just fine.

The rest of the work was just coupling it to the mechanism. The mechanism is made of wood and metal tubes. [Jeremy] found that the strandmaus had a tendency to fall down. He figures that’s why the original strandbeests had so many legs.

For his next iteration he wants to try to make it more stable, but for now he’s just having fun seeing his little legged contraption scoot around the floor. Video after the break.