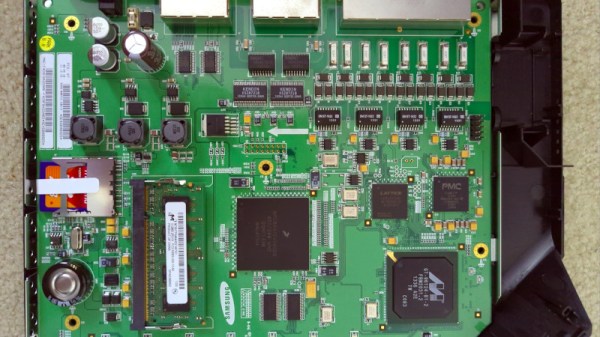 When it comes to internet connections, here in 2022 so many of us have it easy. Our ISP provides us with a fibre, cable, or DSL line, and we just plug in and go. It’s become ubiquitous to the extent that many customers no longer use the analogue phone line that’s so often part of the package. But before there was easy access to DSL there were leased lines, and it’s one of these that [Old VCR] is dissecting. The line in question is a T1 connection good for 1.536 Mbit/s and installed at great cost in the days before his cable provider offered reliable service, but over a decade later is now surplus to requirements. The ISP didn’t ask for their router back, so what else to do but give it the hacking treatment?

In a lengthy blog post, he takes us through the details of what a T1 line is and how it’s installed using two copper lines, before diving into the router itself. It’s an obsolete Samsung device, and as he examined the chips he found not the MIPS or ARM processors we’d expect from domestic gear of the period, but a PowerPC SoC from Freescale. Connecting to the serial port reveals it as running SNOS, or Samsung Network Operating System from an SD card, and some experimentation finds a default password reset procedure through the bootloader commands. The rest of the piece is dedicated to exploring this OS.

There was a time before the advent of the Raspberry Pi and similar cheap Linux-capable boards, that hacking a router was the way to get a cheap embedded Linux system, but now it’s much more done to liberate a router from the clutches of manufacturer and telco. Still, it’s very much still part of the common fare here at Hackaday.