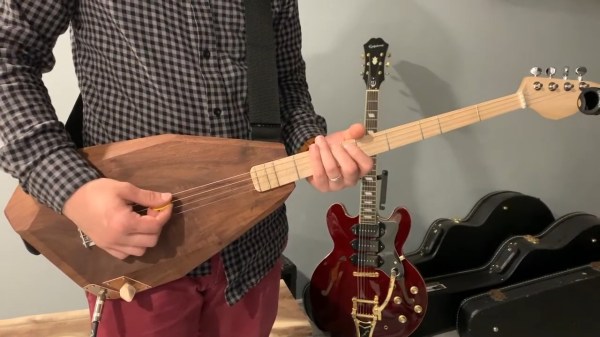 It’s no secret that we have a soft spot for musical instruments here at Hackaday, especially for the weird and unusual ones. An instrument that definitely fits the unusual category is the four-string tenor guitar, which — as legend has it — originated back in the 1920s by frankensteining a banjo neck and a guitar body together. Despite being around for almost a century, they’re still rarely found outside some niche genres, which makes them an excellent choice when pursuing a unique sound experience. As someone looking for exactly that, [Ham-made] decided to build an electric tenor guitar entirely from scratch, and documented every step of it at great length.

Built from two random chunks of wood, a dissected single coil pickup, and a leftover piece of elk antlers, the result is even more unique than the sound experience itself. While the rather unorthodox, faceted body shape leaves no doubt that this is a handmade instrument, the real eye-catcher has to be the neck and its oddly spaced frets. Counting the frets, the math doesn’t seem to add up either, as the twelfth fret usually creates the octave, and as such should be at half the scale length (i.e. half the string’s length from the bridge at the body’s end to the nut at the neck’s end). Turns out that [Ham-made] went for a diatonic scale instead of the usual chromatic one, essentially leaving out the notes you anyway wouldn’t play in a standard Pop or Rock setup. Using an all-fifths tuning akin to cellos and mandolins, this will work nicely over all four strings.

Aesthetics are certainly a subjective matter, and [Ham-Made] is fully aware that people might feel downright offended by his creation, but as he also wants to “embrace mistakes and promote experimentation”, he encourages everyone with similar aspiration to simply go for it — and he’s certainly no stranger to unconventional instruments and recording equipment. But before the never-tiring tonewood debate sparks up, check out this scrap metal guitar.