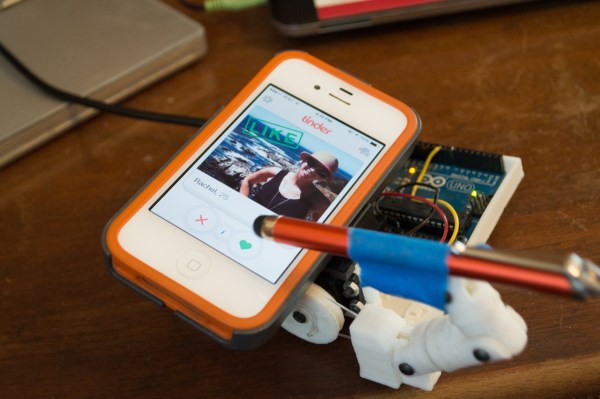 Online matchmaking has taken the internet by storm as mobile dating applications like Tinder attempt to take the work out of locating a soul mate. As of mid-2014, Tinder is rumored to have around 10 million daily active users making it a prime target for automated spam bots. The real spammers surely use coded attacks, but this robot is a fun example of a hardware-based attack. [Andrew] built it to be an automatic heart-shaped, button presser.

The device began as a single finger robot-hand project that was inspired by ‘InMoov’, which as their website states is “the first life-size humanoid robot you can 3D print and animate.” An Arduino Uno and servo motor laid the foundation for the system. After which, the joints of the 3D printed finger were assembled in place so that a touchscreen stylus could be attached. Once coded, the little robot was able to ‘like’ a new profile every 4 seconds. This adds up to approximately 900 likes per hour.

The project is cute, and shows one way that fake profiles can be elevated on the Tinder platform. An article written on Symantec’s blog describes a few other instances of spammers flirting with you via the Android app. This post is a continuation of an article released a year prior, yet Tinder has not addressed the issues relating to fake profiles since then.

Let’s try to focus in on the good. With a bit of additional ingenuity, this device could be transformed into a love searching robot that could choose between people. Get a camera hooked up with a face-recognition program, and add some user preferences so that the robot isn’t just hitting ‘like’ over and over, and we might be able to get some interesting research done. Still, it feels like it would be better to go meet people face-to-face.

Check out the video of the bot in action after the break, then let us know what other silly things you could do by targeting different apps.