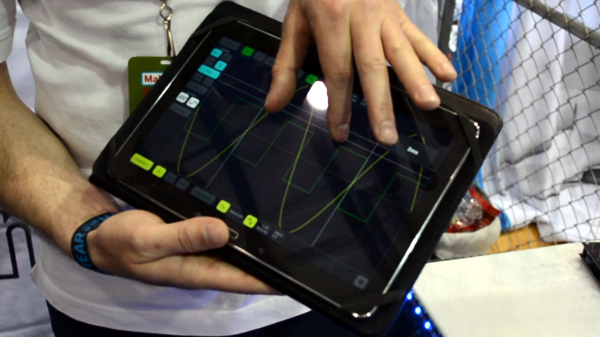 As most of our readers know, [Mike] was visiting Bay Area Maker Faire  last weekend with a big Jolly Wrencher on his back. During his tour he encountered the neat oscilloscope shown in the video above, made by the Belgian company Velleman. Even though it only has a 10MS/s sampling rate and a 10MHz bandwidth, our guess is that it may still be useful for some hobbyists out there as it can communicate with any PC/smartphone/tablet using its Wifi interface.

Inside the black box is a 3.7V 1800mAh Li-ion battery with a USB port to recharge it or update the oscilloscope’s firmware. As seen in the video, the tablet’s touchscreens may enable more natural interaction with the user interface. The protocol used to export the acquired samples is open, which may allow users to create their own analysis program. The oscilloscope uses an 8 bit analog to digital converter and a 4K samples buffer.