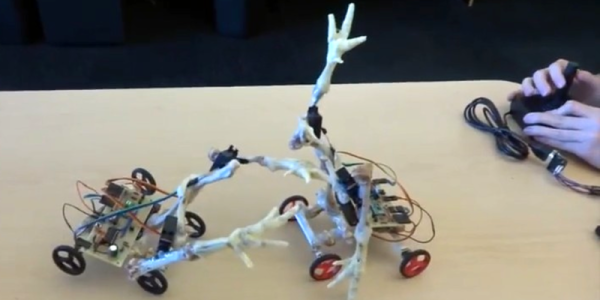 A couple of months ago, [Mike] started saving bones from all the fried chicken he had been eating. If that’s the opening line, you know it’s going to be good.

This Cyborg Chicken project grew out of [Mike]’s love for battlebots, and an immense dearth of battleborgs. The difference, though small, is distinct: a robot is simply a machine that carries out instructions either automatically or via remote control. A cyborg, on the other hand, contains both organic and biomechatronic body parts. Since [Mike] was saving chicken bones, he stumbled upon the idea of creating a cyborg out of trash, a few servos, an MSP430, and some other parts sitting around in his junk drawer.

A continuation of an earlier remote controlled food project, the capabilities of these chicken battleborgs are about what you would expect: they roll around on wheels and flail their drumsticks wildly. [Mike] has already built at least two of these devices, and the result is accurately described as Rock ’em Sock ’em Borgs. Check out the video below for the action.

On the hardware side of things, [Mike] picked up an MSP430, and whipped up a bit of code in Java. Three billion enterprise computing systems and, now, two cyborg chickens run Java. The motors and drivers come from Pololu, and control is provided over IR with a pair of Atari joysticks.

You can check out the videos of these cyborg chickens below. If you have to ask why, the answer is always, ‘because’.