I feel the need to include a disclaimer before getting into this: I don’t own an original Xbox, I own a Playstation 2, I consider myself a casual gamer, I’m a fan of Open Source and not Microsoft.

I purchased this box on the first day because early versions of consoles are generally easier to modify. With the PSP ver. 1.0 it was easy to run homebrew code, but with each successive firmware version, Sony makes it harder. The original Xboxes that are being sold now make it almost impossible to run Xbox Linux because of a hardware change.

Before we get to my experiences, here are some links that you might find interesting. 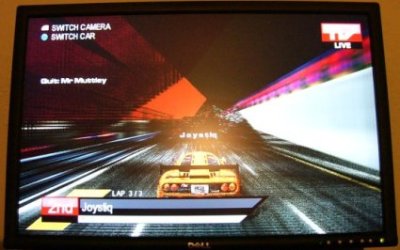 This is the current hot topic (puns are always intended), so I’ll start with it. As you can see from the photo above, I have experienced problems with my 360. You can see more photos on the Flickr Hack-A-Day photo pool. While observing a race that
Joystiq was in, I brought up the sidebar to play music from my iPod. This resulted in severe graphic glitches (the music wasn’t playing right either) and I had to reboot. Another time while playing PGR3 I brought up the sidebar and the system froze; I could still chat, but the system would not respond to any button presses, so I rebooted. I feel that both of these issues are Dashboard problems and not heat related. I’m guessing these problems will probably be cured in a future Dashboard upgrade. When you access Live for the first time the dashboard upgrades from ver. 2.0.1888.0 to 2.0.2241.0.

I haven’t experienced any problems that I would consider heat related. That being said: This console is extremely hot. Heat pours out of the back out the machine even when doing menial tasks like playing MP3s. If you place a hand across the right side of the box you can feel the suction from fans. This is the largest intake and because of that I think standing the box up on carpet would be a really bad idea. The feet are short enough that I wouldn’t feel good about standing it up on a hard surface either. The power supply has been blamed for most overheating problems. It has intake and exhaust ports that consist of two rows of holes in a 2×1/4 inch space. The power supply doesn’t get too hot; I’m sitting with my feet on top of it right now using it a foot warmer.

From the top photo you can see I’ve got the 360 plugged into my
Dell 2405FP using the included component cable. The component cable also has a composite video connection so you don’t need a different cable when connecting to an SDTV. Yes, 720p looks amazing and I’m glad that Microsoft has required support for it in all games. It looks a lot better than the jaggie 480p from my Playstation 2. The clarity of the HD is a little lost on me since I use this as my regular computer monitor which can support resolutions up to 1920×1200. I did buy this monitor specifically for the HD support and it should be able to handle 1080p, if the Playstation 3 manages to support it. It’s also nice being able to work while monitoring Live using the picture in picture.

Following the trend set by Nintendo, the Xbox’s OEM wireless controller is great.  They added two shoulder buttons, but unlike the Playstation, placing four fingers on the shoulder buttons doesn’t feel natural. This is fine because the upper buttons are used for occasional tasks like switching view points; you spend most of your time with index fingers on the triggers. The light on top of the controller indicates which number 1-4 the controller is assigned to, a nice touch. It would be nice to see the possibility of more players supported on a single console though. The wired USB controllers can be used with Windows, but not the wireless controllers when connected with the “play &charge”. The obvious conclusion is that: the play & charge is just a power cable and doesn’t add any sort of USB functionality. I think the headset connector is identical to the original Xbox: 2.5mm jack like cellphone headsets, I also have a 2.5mm RCA cable from my digicam that would work. There are two slots next to the headphone jack that have two metal contacts each which aren’t used by the headset.

One of the first things I did was plug every USB device I had into the Xbox to see how it behaved. My keyboard worked fine whenever there was an on-screen keyboard (It’s the keyboard from the Playstation 2 Linux kit). The system really hated the mouse; none of the other peripherals would work when it was plugged in. My video iPod came up almost immediately and was identified by its name “pwn3d by hackaday”. Plugging in the camera, card reader and flash drive all worked, but not at the same time. It also doesn’t like the card reader built into the monitor, but the flash drive and keyboard both work when connected through the monitor’s hub. My Prism2 based WiFi adapters were not recognized by the box.

One of the main reasons I purchased the Xbox was its media streaming ability. Using the Windows Media Connect you can access music and photos stored on your Windows XP machine. The software will also stream video, but not to the Xbox 360 because Microsoft has decided to cripple it. This is an attempt to sell more Windows Media Center PCs since you can stream video using them. Media Connect uses the UPnP AV protocol to stream media, but the Xbox won’t recognize other UPnP servers like uShare. If it did, it would be easy to stream from a Mac or a Linux machine. The Xbox also doesn’t appear as a media renderer when using Cidero UPnP control Point software. Here is a good overview of the media center features. [via Xbox360Fanboy]

Playing music is easy enough. It was a lot more enjoyable navigating music stored on the iPod than on my roommate’s XP machine. The iPod is neatly organized while Media Connect scrapes every directory you give it, listing every random music file and playlist it comes across. The interface is pretty easy to use, but I have a couple complaints. Adding a song to a playlist takes at least three button pushes. When you click “add to playlist” it takes you to the playlist and then you have back up to get back to where you were before. They should dedicate one button on the controller for adding the song and not make you jump back and forth. Also, you can’t save playlists that include music not stored on the hard drive. The easiest way to manage playlists is building them on your PC or in iTunes for your iPod instead of using the Xbox interface. The Xbox does work really well if you want to play by album, artist, or genre though.

I’ve enjoyed playing on Xbox live. Being able to jump easily into a game with friends is great. Delivering free demos to consoles is a wonderful idea: I’m much more likely to buy games I’ve already played just like buying DVDs of movies I’ve already seen. It would be nice to receive videos from videogame review sites too. The downloads from Live are extremely slow, they should really use a distributed system since they have a huge network of identical consoles. I wish Live had a way to organize friends into groups like I can on IM: coworkers, readers, random.

This is what I hate the most about the new Xbox 360.

Is the Xbox 360 worth buying? If you have prerequisites like an HDTV and a Media Center PC the Xbox 360’s support for these items will make it well worth your time.  If you want to just use it as gaming system, it’s hard to justify the expense right now. Like most console launches, the titles aren’t that revolutionary. I think the best plan would be to wait till next year to make the purchase: the console will be cheaper, the selection of games will be broader, used games will be available, you’ll know the Playstation 3’s features, the Xbox 360 games will be making better use of the console’s power, Microsoft will have most of the bugs ironed out and you might be able to run Linux.