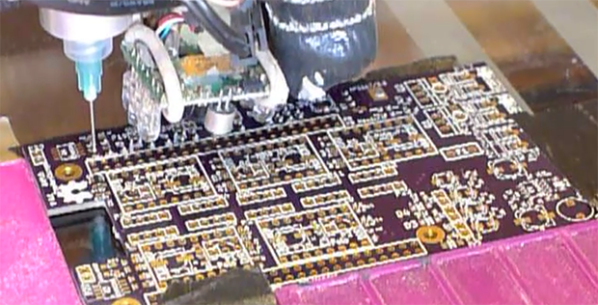 There’s a strange middle ground in PCB production when it comes to making a few boards. Dispensing solder paste onto one board is easy enough with a syringe or toothpick, but when pasting up even a handful of boards, this method gets tiresome. Solder paste stencils speed up the process when you’re doing dozens or hundreds of boards, but making a stencil for just a few boards is a waste. The solution for this strange middle ground is, of course, to retrofit a 3D printer to dispense solder paste.

This project was a collaboration between [Jake] and [hzeller] to transform KiCAD files to G Code for dispensing solder paste directly onto a board. The machine they used was a Type A Machines printer with a solder paste dispenser in place of an extruder. The dispenser is hooked up to the fan output of the controller board, and from the looks of the video, they’re getting pretty good results for something that’s still very experimental.

All the code to turn KiCAD files into G Code are up on [hzeller]’s github. If you’re wondering, the board they’re pasting up is a stepper driver board for the BeagleBone named Bumps.

END_OF_DOCUMENT_TOKEN_TO_BE_REPLACED