We asked, you listened! Last weeks Hacklet ended with a call for more Halloween themed projects on Hackaday.io. Some great hackers uploaded awesome projects, and this week’s Hacklet is all about featuring them. Every one of our featured projects was uploaded to Hackaday.io within the last 7 days. 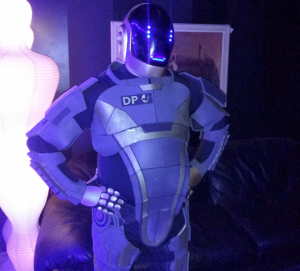 Mass Effect meets Daft Punk in [TwystNeko’s] 5-Day SpeedBuild Mass Effect Armor.  As the name implies, [TwystNeko] built the armor in just 5 days. Ethylene-vinyl acetate (EVA) foam was used to make most of the costume. Usually EVA foam needs to be sealed. To save time, [TwystNeko] skipped that step, and just brushed on some gold acrylic paint.  The actual cuts were based on an online template [TwystNeko] found. To top the armor off, [TwystNeko] used a custom built Daft Punk Guy Manuel helmet. Nice! 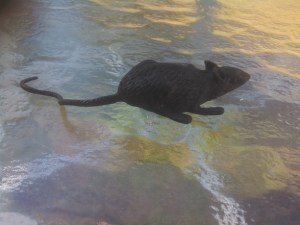 [Griff] wins for the creepiest project this week with Rat Bristlebot. Taking a page from the Evil Mad Scientist Labs book, [Griff] built a standard bristlebot based on a toothbrush and a vibrating pager motor. He topped off the bristlebot with a small rubber rat body from the party store. The rat did make the ‘bot move a bit slower, but it still was plenty entertaining for his son. [Griff] plans to use a CdS cell to make the rat appear to scamper when room lights are turned on. Scurrying rats will have us running for the hills for sure! 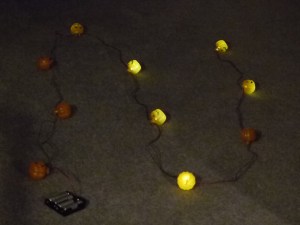 [MagicWolfi] was created Pumpkin-O-Chain to light up Halloween around the house. This build was inspired by [Jeri Ellsworth’s] motion sensing barbot dress from 2011. Pumpkin-O-Chain uses the a similar RC delay line with 74HC14 inverters to make the LEDs switch on in sequence. He wanted the delay to be a bit longer than [Jeri’s] though, so he switched to 100K ohm resistors in this build. The result is a nice effect which is triggered when someone passes the PIR motion sensor. 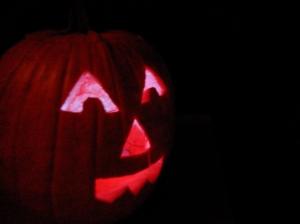 [Petri] got tired of his Jack-o’-lantern candles burning out, so he built his own Pumpkin Light. The light made its debut last year with a Teensy 2.0++ running the show. This year, [Petri] decided to go low power and switched to an MSP430 processor on one of TI’s launchpad boards. With plenty of outputs available on the Teensy and the MSP430, [Petri] figured he might as well use and RGB LED. The new improved Jack-o’-lantern can run for hours with no risk of fire. 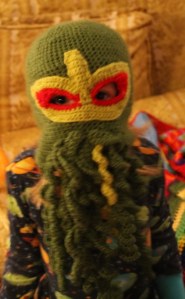 an’t end this week without mentioning [Griff’s] updated Crochet Cthulhu Mask. We featured the mask in last week’s Hacklet, and called  [Griff] out for an update. Well, the final project is up, and it looks great! We’re sure [Griff’s] son will be raking in the candy this year!

It’s time for trick-or-treating, which means we have to end this episode of The Hacklet. As always, see you next week. Same hack time, same hack channel, bringing you the best of Hackaday.io!