When you think of satellites, you may think of the Space Shuttle extending its robot arm with a huge piece of high-tech equipment waiting to pirouette into orbit. This misconception is similar to picturing huge mainframes when thinking about computers. The future (and arguably even the present) reality of satellites is smaller, cheaper, and more prolific. This future is also an “open” one if the Libre Space Foundation has anything to say about it.

This group that plans to make satellite communications available to anyone started out as a build at a hackerspace. One good idea, a shared set of skills and experience, and a little bit of time led them to accomplish amazing things. We are, of course, talking about the Grand Prize winners of the 2014 Hackaday Prize. The SatNOGS team built a working satellite ground station and laid the foundation for a data-sharing network to connect to it. But even this description can be a bit daunting, so come with me to learn what this is all about, and how it matters to you.

Satellite ground stations have been around as long as satellites have. It’s simply the antenna that communicates with satellites in space. The traditional model is a huge dish, sometimes enclosed in a white dome.

There are several things to consider. First, a single ground station can only stay in contact with a satellite if it is in geostationary orbit (meaning the satellite is always above the same point on the earth). Dishes pointing at these satellites are in near-constant communication with these satellites. Want to get some time on this thing? Fat chance!

Secondly, satellites which are not locked in synchronous orbit are only in contact with a single ground station for a small portion of each pass. Eventually the planet gets in the way and you need a ground station on a different part of the globe to communicate with it while you are in blackout.

The SatNOGS project seeks to address both of the issues just mentioned. It starts with the hardware; an Open Design which can be built at a minimum of cost using readily available tools and a reasonable skillset. Bootstrapping your own receiver is one way to guarantee your access to a ground station. But if you’re also willing to share some of that time with others you unlock the solution to the second problem.

The SatNOGS project allows multiple ground stations to synchronize their data and to schedule time on each instance of the hardware around the world. A ground station must point at the right place at the right time for any given satellite. The platform design accounts for this by sending scheduling data back to each ground station which will automatically adjust its aim to line up with the next satellite capture request.

Building the network is key. As more people build and deploy their own hardware, everyone gets a bigger piece of the satellite data as it is collected.

This is Bigger than SatNOGS: Libre Space Foundation 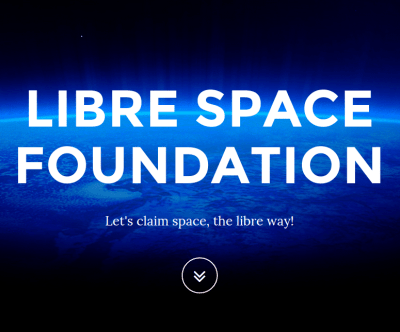 From the description above we’re sure you agree that this has the potential to be much more than a project between a few friends. This is a movement. The SatNOGS team came to this realization early on and conceived of an organization to help illuminate the path. The Libre Space Foundation was formed with the idea that all of satellite communications should have an Open model. This means the satellites themselves, the ground stations, and the data.

We already mentioned the Grand Prize, which was of course a trip into space. We were really hoping that we’d see a hacker sign up for such an adventure, but we’re thrilled with the alternative. The SatNOGS team went with the cash option of $196,418 and chose to invest it in the Libre Space Foundation (LSF). This is a great jump-start but the LSF needs more than just cash to succeed. They need people to adopt and further their vision.

Those smaller, cheaper satellites that we mentioned before come from many different players. They are often known as CubeSats and the common form-factor is 10cm on each side. Universities have been building and launching these for some time now. It’s a great engineering challenge, to be certain, but it’s also a way to conduct experiments in near-zero gravity.

Private industry has been in on the action as well. Planet Labs has launched what they call “flocks” of these small satellites which work together to form something of a line-scanner for the planet. The system images the entire earth once every 24 hours.

Already there are proofs of concept that all point to personal satellites. That’s right, you can own a satellite. Just like the two previous examples; built it small, and launch it as extra cargo. We saw a very successful crowd funding campaign just a couple of years ago on the topic. And our own Hackaday.io has numerous satellites, warranting a roundup of them all. 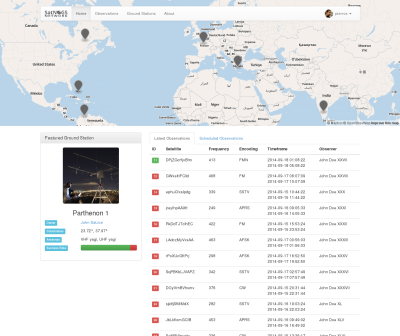 What kind of data can you get from these satellites? It’s easy to assume that all of this is encrypted and proprietary but that’s simply not the case. Sure, media and communications satellites are not going to dump the latest episode of Game of Thrones into your home-built ground station. But there are a lot of satellites that are broadcasting useful data in the open.

To name one very interesting source, the National Oceanic and Atmospheric Administration (NOAA) has a collection of satellites monitoring weather and transmitting the data back to earth. Recording these transmissions is a trick we’ve seen many times over the years.

One that we’ve seen less often is grabbing data sets from research satellites like those launched by University programs. Getting your hands on the data without waiting for the researchers’ publication means more opportunities for peer-review and better access for educational purposes.

The potential is also there to form your own communications networks. Right now SatNOGS hardware is a receive-only unit. But the software stack is ready for transmit and receive. This will that the DVB-T dongle be swapped for something with a transmitter, and more than likely will call for licensure in most areas (for example, an amateur radio license) but these are not large hurdles to cross. As mentioned, the LSF has hopes of developing Open Hardware and Open Source Software designs for satellites. Imagine your own data network. In Space. Now that is a brave new world.

Here’s How You Can Help

We like to dream big and it excites us that the LSF is doing just that. But they need your help.

Version 3 of the SatNOGS ground station is in development and they can use experts in all areas to help. Most notably, RF design to help improve communications, as well as mechanical design to ensure the build will stand up to time and weather. Check out the SatNOGS community for more on getting involved directly.

Don’t have the skills to build these yourself? Don’t worry, just spreading the word is a big way to help. Give a talk at your local Hackerspace, or just pester all of your neighbors. It’s space, everyone wants to hear about that, right?

26 thoughts on “Ground Stations Are Just The Beginning: The SatNOGS Story”