The Caption CERN Contest has been rolling along since the first week of February. We’re in our 6th week now, and the users over at Hackaday.io have given us some great captions!

Here are the results from Week 5:

Guy #1 “Pay close attention: If anything goes wrong, press this BIG RED BUTTON. Then count to ten.”
Guy #2″ What does it do?”
Guy #1 “Absolutely nothing… it just gives you something to do while you’re dying a horrible, painful death.” – [Lorin Briand]
“We’ve miniaturized the mainframe – only 21,480 tubes!.” – [Tim]
“Watch my finger…now, you are getting very sleepy…fund this project…sleeeeepy…” – [Erik Ratcliffe]

The winner this week is [johnowhitaker] with the following caption:

‘Any moment now…’ An elderly visitor waits skeptically for the ‘funny tingling’ experienced by anyone within 3m of the machine as it runs a specific program.

Congrats  [johnowhitaker], you’re getting a free CRT Android T-shirt from The Hackaday Store!

Week 6 just started! Caption the image for your chance to win a T-shirt of your own! 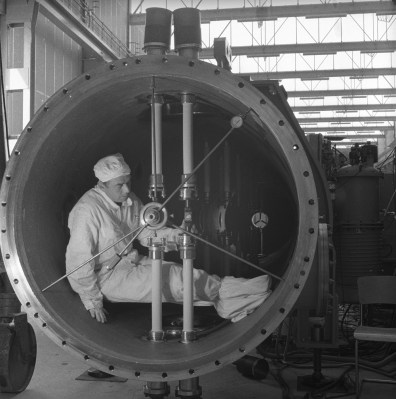 CERN scientists and engineers often find themselves in interesting positions. However, we’re not sure if this CERN staffer ever expected to be quite where he is now!

The only hard information we have to go on is the album this title of the image: “SEPARATEURS ELECTRO STATICS MONTAGE DES ELECTRODES”. Our French isn’t as good as our C++ or x86 assembly, but that sounds like electrostatic separators. Which separators, on which beamline, and in what decade? Your guess is as good as our’s, or CERN’s for that matter.

Add your humorous caption as a comment to this project log. Make sure you’re commenting on the project log, not on the project itself. As always, if you actually have information about the image or the people in it, let the folks at CERN know on the original image discussion page.

If you really want to see what’s happening at CERN, enter The Hackaday Prize! You could win a trip to Geneva, Switzerland to visit CERN yourself (not to mention a trip to space)!