We had a wonderful time over the weekend at the 2015 SXSW Create. I was really excited to see that there was a very large area set aside for the Hackerspaces of the Austin area and they took full advantage of that. Most notably, ATX Hackerspace who had multiple tables and was drawing a huge crowd. 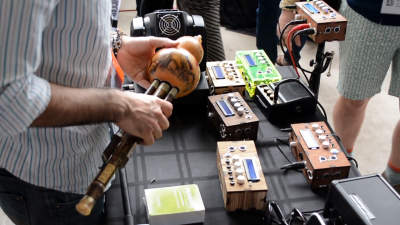 This table is a good example of the demonstrations on hand. Primarily It’s a collection of ultrasonic theremin. The classic theremin uses oscillator-based sound production (we’ve been running a series on that concept) with a set of antennas that uses your body’s proximity to tweak that signal. This version mimics the user interface but greatly simplifies the skillset needed to produce the instrument by swapping the antenna for an ultrasonic rangefinder and generating the audio digitally. The more astute viewer will have noticed the instrument being held. I neglected to ask about this but it sure looks like a Holophonor which is another great seed idea for your next project. Update: it’s a Hulusi. 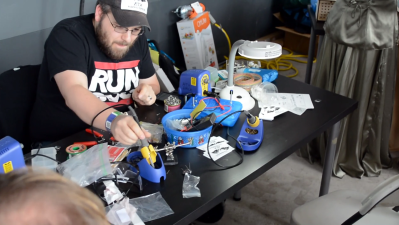 I do think it’s worth noting that ATX also set aside a lot of table-space for their members to actually work on building projects at the event. We’re big advocates of this rather than simply exhibiting finished projects. It doesn’t really matter what you’re working on; seeing a table covered with interesting parts and tools, being worked on by fun people obviously enjoy each other’s company is the core message of a Hackerspace… right?

I talk with [Gardner] about ATX in the video after the break, and make a quick loop around the display tables.