We had some great entries in the Caption CERN Contest this week. A huge thanks goes out to everyone who entered.  The jury is still out as to whether the gentleman on the left is a CERN staffer, or a Morlock caught on camera. Our eagle-eyed readers picked out some things we didn’t even notice at first blush – like the strange foreshortening of the “pipe smoking dude’s” right leg. (Yes, he is officially known as pipe smoking dude here at Hackaday HQ). We spotted him again in this image, and he’s in almost exactly the same pose!

The winner for this week is [Greg Kennedy] with “You call that a moonwalk? Stand back, Edmund, and let me show you how it’s done.”  If [Greg’s] name sounds familiar, that’s because he used some creative web scraping to compile the unofficial stats for the 2014 Hackaday prize. They were pretty interesting, so we featured them right here on the blog. [Greg] will be hacking in style wearing his new Robot T-Shirt From The Hackaday Store! 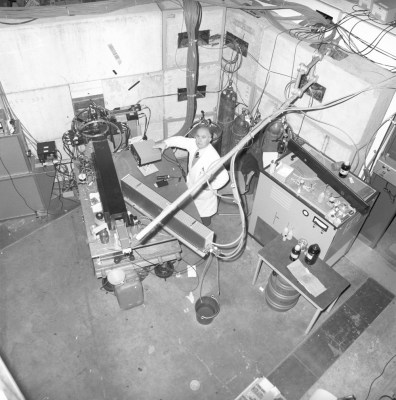 There’s something for everyone in this image from CERN’s achieves. Gas bottles, chemicals, huge concrete blocks, high voltage wires, and a rather surprised looking scientist. What sort of experiment would require this sort of shielding? What is the photographer standing on? Most importantly, is that a keg of beer hiding under the table to the right?