Week 12 of the Caption CERN Contest and the strange stringed scientific instrument it brought along are both history. As always, thank you for your captions! They provided quite a few chuckles in the busy week gearing up for our Hackathon. We’re still not sure exactly what is being built here – Our best guess is it’s some sort of detector for emissions. But what sort of emissions? Was CERN looking for electric fields, magnetic fields, or something else entirely? It’s interesting to note that just as the photographer’s flash reflected in all 5 layers of wire, an RF signal would bounce off the rear reflector and strike the wires.

The winner for this week is [THX1082] with “CERN’s early attempts at developing “String theory”. They’re doing it wrong. [THX1082] will be at his next hackerspace meeting wearing a CRT Android T-Shirt From The Hackaday Store! 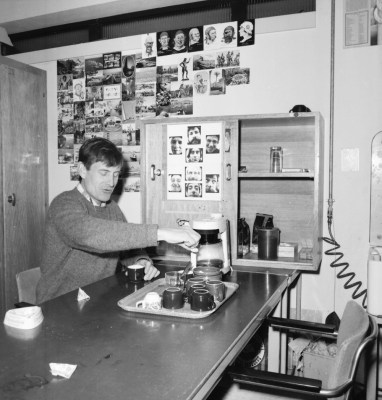 Every week we get at least one caption explaining that the strange piece of equipment included in that week’s image is a coffee maker. I thought it would only be right to include this shot of CERN’s real coffee nook, and a scientist about to enjoy a fresh cup of liquid “get ‘er done”. I have to thank CERN’s photographer for grabbing this slice of life shot!

It’s worth taking the time to check out the high res JPEG direct from CERN, as you can really zoom in on the post cards and photographs in the background. One even says “Tout va tres bien” – which Google translates to “Everything is going very well”. Some jokes never get old!