Forget all of this video game nonsense: pinball is the real king of gaming. After all, it involves large pieces of metal flying around at high speed. [retronics] agrees: he has resurrected an old Briarwood Aspen pinball table using an Arduino. 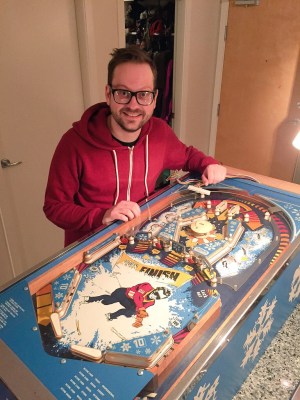 When he bought the table, he found that the electronics had been fried: many of the discrete components on the board had been burnt out. So, rather than replace the individual parts, he gutted the table and replaced the logic board with an Arduino Mega that drives the flippers, display and chimes that make pinball the delightful experience it is. Fortunately, this home pinball table is well documented, so he was able to figure out how to rewire the remaining parts fairly easily, and how to recreate the scoring system in software.

His total cost for the refurb was about $300 and the junker was just $50 to start with. Now for $350 you can probably find a working pinball table. But that’s not really the point here: he did it for the experience of working with electromechanical components like flippers and tilt switches. We would expect nothing less from the dude who previously built an Android oscilloscope from spare parts.