If we’re going to talk about input impedance we need to look back at our old friend Ohm’s Law. (If there’s another equation that’s as useful as Ohm’s Law, we don’t know it.) V=IR. Or, solved for current, I = V/R. What Ohm’s law says, in words, is that the amount of electrical current flowing in a circuit increases as you increase the voltage, and decreases as you increase the resistance. It’s that simple, but it’s really powerful.

Now think of an electronic component. It doesn’t really matter what, so we’ll think of an amplifier here. Imagine that we want 3.5 V, for whatever purpose, to show up on the input to our amplifier. You’d think it’d be easy, just hook up a wire to the amplifier and put 3.5 V on it. That’s not the whole story. 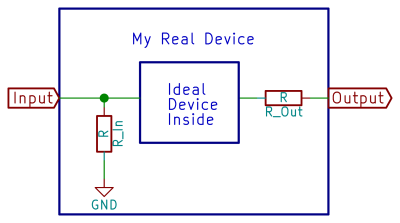 Engineers like to think of devices like amplifiers as simply reading the voltage level at their input. But we’ve got a real amplifier, and it takes some current flowing in for it to work. The compromise, then, is to think of the real amplifier as being an “ideal device” inside, with a resistor to ground that sucks in some current from the input. The value of this imaginary input resistor is the device’s input impedance.

So when we put 3.5 V on the input of the real device, some current flows into the resistor and out to ground, and this can in turn lower the voltage that reaches the ideal device that lies inside.

Similarly, the chip isn’t able to put out infinite amounts of current at any given voltage. (That would be cool, though, no?) Instead, as we ask for more and more current from the device, we’ll see its output voltage sag. Just like with input impedance, we can model this sagging as a simple resistance: how much does the voltage drop when we ask for more current output? V=IR. Again, the output impedance is that output resistor’s value.

Both input and output impedance are quantities that you can often look up in the datasheets of a single component, figure out yourself for a transistor amplifier circuit, or even measure yourself.

Now you’ve got the idea behind input and output impedance, and we’re ready to think about impedance matching. Roughly speaking, there are three cases. The first is where you care about getting a voltage signal from one device to the next, and you’re running everything at lowish frequencies. Case two is where you’re interested in transferring electrical power (voltage times current) to the second device.  Case three is a catch-all for when you’re working at high frequencies and need to minimize reflected signals.

If you’ve got a low-frequency voltage signal, you don’t actually want to match impedances at all. Instead, and this goes for basically all audio signals, you want a low output impedance and a high input impedance. 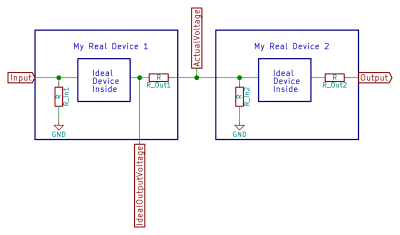 Now assume we’ve got 10K output impedance and 10K input impedance. The voltage that reaches the second amplifier is 3.5V * 10K / (10K + 10K) = 1.75V. In short, half of what we naively thought we were getting. That’s not good if we care about the analog voltage level.

Before we leave this topic, note that relatively little current needs to flow through this system to get the voltage signal across if we have a high input impedance.

Now what if the second device is something like a motor or antenna? Our goal is not to put a certain voltage on the second device’s input, but rather to transfer as much power to it as possible. 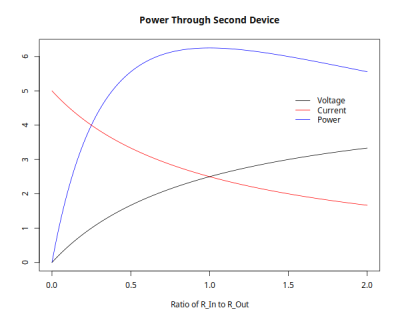 As you increase input impedance, you raise the input voltage (black line) just as in the impedance bridging case above. But a higher input impedance also means less current passing through the system (red line). The power transferred to the second device (blue line) is the product of the current and voltage. You can see that it’s maximized when the two impedances are the same.

Note that at the power transfer maximum, we’re cutting the voltage in half: 2.5 V instead of 5 V. If you care about both power and voltage transfer, you’re out of luck.

It turns out that we want to match impedances at very high frequencies too. Why? Because everywhere there’s an abrupt impedance mismatch, some signal gets reflected.

At low frequencies, reflected signals don’t really matter that much. They bounce back and forth in the wire connecting the two devices so fast, getting a little bit absorbed in the wire with each trip, that they die out quickly relative to the frequency of the signal we care about. At high frequencies (say 300-500MHz and up?), the signal we care about changes on about the same time scale as the reflected signals bouncing around in the wire, and the desired signal and its reflections get confused together. We want to avoid that.

There’s a trade-off with high frequency impedance matching. Often, we really do care about the level of the voltage signal, but we’re so disturbed by the echoes that it’s worth taking the 50% loss in voltage level to make sure that there are no reflections messing the signal up. You just have to make up for this loss in voltage with some extra amplification.

So far, we’ve been pretending that our impedance is purely resistive. But most real-world devices have a bit of capacitance or inductance to them as well, and they have frequency-dependent resistance. Capacitors have lower resistance at higher frequencies, while inductors have lower resistance at lower frequencies. If your devices have significantly capacitive or inductive input or output impedances, you’ll also have to keep in mind what frequency you’re operating at.

For voltage transfer, we’re just worried about making sure that the input impedance is high enough. Too much input capacitance at high frequencies can be a problem here.

To minimize reflections at high frequencies, you can often look up (or calculate) the output impedance at the desired frequency and add in a simple resistor to ground at the input of the second device to match it.

If you’re interested in maximum power transfer, things get messy. Capacitors and inductors don’t react instantly, and you need to match this reactance as well. This is a problem that bedevils radio transmission amplifier/antenna systems. Radio folks are very interested in getting the maximum power out to their antenna, so they have a number of tricks to make these complex impedance matches work.

37 thoughts on “Say It With Me: Input Impedance”