There’s been too much to do here at the Chaos Communication Camp — the Quadrennial outdoor meeting of hackers. Between talks and projects and workshops, there’s hardly been a minute to sit down and write up a summary.  Nonetheless, I’ve sat in on a few talks.  Here’s a quick overview of some of what happened on Day One, and a little look behind the scenes into what makes a 5,000-person hacker camp work.

The Chaos Compter Club has been politically active since its inception, and Day One reflected that tradition. There was a talk (in German) about the NSA and what hackers can do politically and technically to protect themselves from mass espionage. 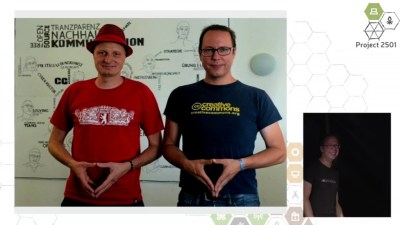 Not that Germany is without its own domestic surveillance scandals (Google Translate) at the moment, either. In the last months, two bloggers for Netzpolitk.org were charged with treason for revealing a part of the BND’s (the German FBI/CIA) budget dedicated to domestic surveillance, and they were here to tell their hair-raising, but hopeful tale.

Just after the case become public, people were demonstrating in the streets for press freedom, and politicians distanced themselves from the decision as it became clear that the state prosecutor had overstepped his bounds, and that the value of a free press outweighs the minuscule damage done to domestic spying capabilities. The prosecutor has lost his job, and in the end the state is even helping the bloggers with defense counsel and helping to pay some of their legal bills, which is quite a decent thing to do. 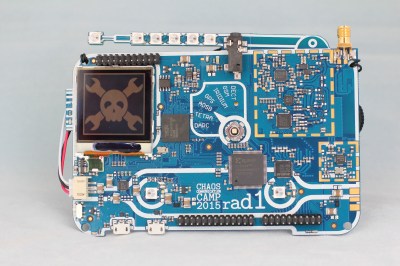 The Munich camp spent the whole day working on the hardware, firmware, and software related to the rad1o badge: squashing bugs, extending capabilities, and helping folks solder extra WS2812 LEDs onto their badges. Between last night and tonight over 3,500 badges were given out, and there are still enough left for laggards. But despite the calm and orderly exterior, the path from idea to colossal badge endeavor wasn’t entirely smooth, as the talk explains.

Our favorite hardware horror story was the discovery, in June, that there was an erratum in the manufacturer’s datasheet published in February that revealed that the BGA footprint was wrong. (Who downloads the newest version of the datasheet just to double-check that no errata have come out while you’re laying out the board? We will now.) The fix? Drilling the pin out, from the other side of the board, with a 0.25mm drill bit. That’s not a whole ton wider than a hair.

The talk, given by the Munich team, came with a bonus guest section by none other than Michael Ossmann, the developer of the HackRF board which the badge took as its inspiration and template. Michael gave a heartwarming talk about his development of the HackRF and how he just missed the deadline to give the tool out at Toor Camp in the States, dashing his dream to empower 100 hackers in tents to play around with SDR. Through the magic of Open Source hardware, and some sweet giveaways by chipmakers Maxim and NXP, he got to see over 4,000 (similar) SDR tools in the community.

Although the talk was great, hackers don’t wait for a talk to get started working. With the badges in people’s hands for under 24 hours, firmware bugs were smashed and a ton of pull requests with (mostly) interesting animations were posted. Now that the full camp population has a badge in its hands, we expect this to continue, and are hoping for some sweet RF hacks.

Hackaday Prize 2014 winner SatNOGS gave a talk on what they’ve been up to with their distributed satellite monitoring project. The talk was basically an overview of the whole system and a renewed call for participation in the project. In particular, they’ve recently debuted their open database to go along with their open-source hardware satellite tracking project. Now when you build your tracker, you can submit data in to the global project. Way to go SatNOGS!

Behind the Scenes: Communication

The Chaos Communication Camp: Communications is its middle name. On the site, the talks are being locally broadcast over the air using DVB-T. Take a normal (digital) TV, and you can tune in and just watch. And if you’re not here, you can watch along at home.

There’s a camp phone network with 42(!) base stations, using DECT phones, and anyone who brings (or borrows) a phone can get a four-digit phone number on the local system. Naturally, these are connected to the outside world as well. And since DECT phones are getting a bit old in the tooth, the Camp also provides GSM service when you have a Camp SIM card. The GSM network is currently powered by commercial SDR (with amplifiers, naturally) but the POC team is working on converting it to run on, you guessed it, the camp badge. Now that’s a hack. 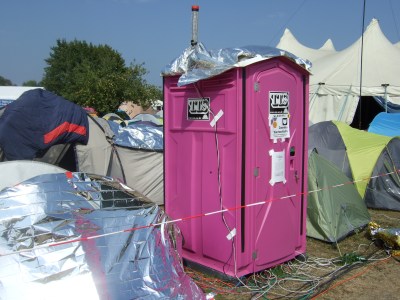 No dispatch from Camp would be complete without mentioning the Datenklo — the Data Toilets. If you’re ever on Hacker Jeopardy, two questions work for the answer “Datenklo”: “What do you call an acoustic modem because of the toilet-seat like sealing rings?” or “What’s a waterproof, well-ventilated housing that fits conveniently over a server rack full of Gigabit networking switches?” Here at Camp, you run an Ethernet cable from your tent to the Datenklo and through the “magic” of a dedicated team of volunteers, you get a better connection than you’ve got at home: in your tent. That’s hacker camping.

And of course, the Datenklo come with blinky lights. Since the last camp in 2011 the Datenklo have upgraded speeds and lights. They now have strands of WS2812 LEDs displaying full-color animations. Technological progress never sleeps!

And That’s Just the Beginning

I spent most of the day with the Munich crew playing around with the badges, so there’s doubtless a lot that we missed. It’s a good thing that days at Camp have twenty-one waking hours in them, running from around 7:00 AM, all day and night until about 4:00 AM. Even so, we’re sure there’s a lot we’ve missed out on. If you’re reading this at Camp, send us a shout-out in the comments, and let us know what else we missed from Day One.

4 thoughts on “Chaos Communication Camp 2015: Dispatch From Day One”