[Brek] needed to store 64 bits of data from his GPS to serve as a last-known-position function. This memory must be non-volatile, sticking around when the GPS and power are off. Solutions like using a backup battery or employing a $0.25 EEPROM chip were obviously too pedestrian. [Brek] wanted to store his 64 bits in style and that means hand-wired core memory.

OK, we’re pretty sure that the solution came first, and then [Brek] found a fitting problem that could be solved, but you gotta give him props for a project well executed and well documented.

Core memory is basically just a bunch of magnetizable rings on wires. When you pass enough current through a ring it becomes magnetically charged (North or South) depending on the direction of the current. Once magnetized, if you try to re-magnetize the core in the same direction, nothing changes. But if you flip the polarity of the ring, it emits a short electric pulse in the process. Sensing this pulse (and re-writing the bit back to its original state if necessary) buys you one-bit-per-ring of memory that remembers even when the power goes off. 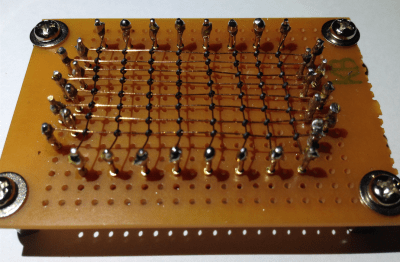 You could string the cores up independently, but that’s a lot of wiring. The trick to making core memory (halfway) reasonable is the fact that a current that’s not quite strong enough to flip the polarity of a ring doesn’t do anything.

Look at the way the cores are wired up in a matrix. If you want to select a single core, you can apply half the current to one of the y-axis wires, for instance, and then another half current to a single x-axis wire. Now the one ring to get enough current to flip state is the core in the cross-hairs; all the other rings in the x or y direction only get half.

What’s amazing to us young(er) whipper-snappers is that this was the dominant form of computer memory from the 1950s to the beginning of the transistor age in the mid-1970s. (Come to think of it, my father’s PDP-8 had core memory cards that I vaguely remember seeing as a kid. The sheer wiring required for 4KB was ridiculous.)

Now back to [Brek]’s project. He’s added some shift registers and H-bridge drivers to handle the logic and current requirements respectively. The sense amplifier lives in a tidy copper cage. The whole build is a sweet testament to over-the-top, bespoke retro engineering. And he gets extra points for the hysteresis logo on the top cover. Go check out his project.

Thanks, [Brek] for all the work and documentation!

54 thoughts on “Core Memory For The Hard Core”