For many hardware enthusiasts, it’s hard to stop imagining the possibilities of an almighty fablab in our garage — a glorious suite of machines that can make the widgets of our dreams. Over the years, many of us start to build just that, assembling marvelous workbenches for the rest of us to drool over. The question is: “how do we get there?”

Ok, let’s say we’ve got a blank garage. We might be able to pick up a couple of tools and just “roll with it,” teaching ourselves the basics as we go and learning from our mistakes. With enough endurance, we’ll wake up ten years later and realize that, among the CNC mill, lathe, o-scope, logic analyzer, and the graveyard of projects on the shelves–we’ve made it!

“Just rolling with it,” though, can squeeze the last bits of change out of our wallets–not to mention ten years being a long journey while flying solo the whole time.  Hardware costs money. Aimless experimentation, without understanding the space of “what expectations are realistic,” can cost lots of money when things break.

These days, the internet might do a great job of bringing people together with the same interest. But how does it fare in exchanging the technical know-how that’s tied directly to tools of the trade? Can we get the same experience from a chatroom as we might from a few minutes with the local ‘CNC Whisperer’ who can tell us the ins-and-outs about tuning the machine’s PID controllers?

I’d say that we just can’t. “Getting started” in any subject often seems daunting, but we’re at a compounded disadvantage in that the gurus on the forum have some shared implicit knowledge and jargon on the subject that we wont have if we truly are taking our first steps. (Not to fear, though; none of us were born with this stuff!)

Ruling out forums for taking our first baby steps, where can we find the “seasoned gurus” to give us that founding knowledge? It’s unlikely that any coffee shop would house the local hardware guru sippin’ a joe and taking questions. Fear not, though; there are places for hackers to get their sustenance.

Enter the hackerspace. With coffee mugs and doilies replaced with soldering irons and 3D printers, these places are scattered worldwide and filled with tinkerers and DIY-enthusiasts drawn to the same machines. Hackerspaces put a roof over the heads of local hackers, bring in a few tools, and roll out projects. Some, like the Bay Area’s HackerDojo, have a general set of tools. Others, like BioCurious, cater to a more niche interest. With a membership fee and possibly some light equipment training, you’re in!

Hackerspaces give us something that the internet and our empty garages just can’t: a foreground of tools and a background of “after-hours” engineers who can show us how to use them. If you’ve never taken a chunk out of aluminium with a spinning endmill, the Hackerspace might be the right place to do it. First, we don’t have the up-front cost of paying for the machine ourselves. Second, given some machine time, we now have the opportunity to learn how to use it properly. I’m not suggesting that aforementioned “blind experimentation” with “someone else’s equipment.” Rather, I’m suggesting that here, in front of that CNC desktop mill, is a great time to ask “how to I cut this aluminum stock down to shape I want?”

Hackerspaces also demonstrate a workflow. For any tool we’d someday want in our garage, setting up a “toolchain” to make that tool useful is a non-trivial process, and we’re bound to have a series of questions. Take that CNC mill for example. To go from initial idea to final design takes several steps along the way. First, there’s the computer modeling software for designing the parts. “What did the hackerspace use? Blender? AutoCAD?” Next, there’s the CAM software that translates our 3D model into a list of instructions, a.k.a GCode, for cutting our part. “Did the hackerspace use Mach3 or CamBAM?” Finally, a CNC mill (or another machine) cuts out our part based on the tool paths defined in the GCode. “How did the hackerspace convert their manual tools to CNC? Did they use GRBL, LinuxCNC, or something else?” A hackerspace is a great place to see a successful workflow in action. It’s a place where we can ask questions about the process so that we can someday define our own. 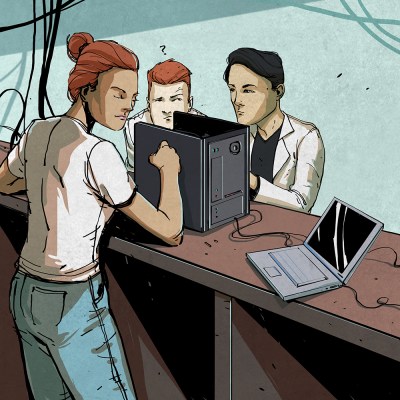 While we’re here, it’s worth taking a step back and glancing around the space. On one end, we might see a bloke putting two stranded wires into a hand drill to quickly spin them into a twisted pair. On the other, we might see a couple of students poised over their Segway-bot, cheering as it balances for the first time! This is our culture, from which we too can learn the tricks of the trade, sometimes by asking questions, sometimes just by looking around. If we’re buried in the garage lair, we might not pick up some of the well-established tricks of our time–or worse–we’ll reinvent yet another wheel and think ourselves clever having done so! Alas, it’s tempting to feel brilliant the day we find ourselves sticking a pair of wires into a hand drill to coil them up, but it’s been done before. Instead, we can visit the hackerspace and discover the edge of the bag of tricks that the rest of our culture has developed. Once we’ve met this edge, we can start pushing it a little further.

About a year ago, I made a visit to the Bay Area’s HackerDojo to borrow some time on a bandsaw. For the trip, I packed both the boxed shambles of my latest project and my camera to document the progress. As I unpacked, I realized that, from the corner, an elderly gentleman with a bushy snow-white beard had been focusing intently on my camera. He approached me and said,

He leaned in and whispered,

Giving me a good long look over the tops of his bifocals, he told me,

“If you’d like, I can show you how to use it properly. Come back next week.”

I returned the next week, and in the course of about two hours, we went through the basics of f-stop, aperture, shutter speed, and ISO settings on my camera. I could’ve taken a week to learn these topics on my own, hunting through the internet trying to answer the question “What should I know about taking pictures with my camera?” Instead, in two hours, I had the basics down, and not just the basics, but the vocabulary and the mental model for going forward in my picture-taking escapades. Here lies the true treasure at the hackerspace. Gathered around the band saws, the resistor boxes, and the soldering irons is a collection of everyday tinkerers not entirely unlike you and me.

So go forth; visit these places! Yes, you’ll find the tools you were looking for. But you’ll also find something else: a culture of expertise and the eagerness to share it, and that’s a find much harder to come by.

58 thoughts on “Want To Create A FabLab In Your Garage? Start By Joining Your Hackerspace”