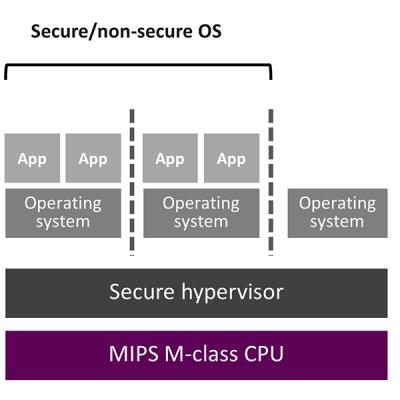 The virtalization of the MIPS M5150 is accomplished by a hypervisor provided by Seltech. On top of this hypervisor, a number of different operating systems, from real-time systems to pedestrian Linux apps can run concurrently, completely separated from each other.

In a video from Imagination Technologies (available below), the true power of hardware virtualization on a microcontroller can be found. A MIPS M5150 CPU runs Linux and the uiTRON operating systems on the same CPU. The uiTRON system controls a motor, and the Linux boots and restarts, without affecting the real-time system. Try doing that with any of the dozens of ARM Linux boards out there.

While the PIC32 isn’t exactly an extraordinary powerful microcontroller – in terms of performance, it’s more akin to the SoC you would find in a router – the ability to run real-time systems alongside general purpose operating systems is a game changer. With hardware virtualization, applications ranging from smart robots, exceptionally capable quadcopters, and CNC controllers that actually make sense are possible.

36 thoughts on “Hardware Virtualization In Microcontrollers”