The Atari Punk Console (APC) is a dual 555 (or single 556) based synth. Designed by the famous (and somewhat infamous) Forrest Mims in 1980 and originally simply named “Sound Synthesizer”, the circuit gained it’s more recent popularity when re-dubbed the “Atari Punk Console” by Kaustic Machines. The circuit however doesn’t bear much relation to the Atari 2600 which didn’t contain a 555 timer chip. However we assume the 2600 produced a similarly glitchy square wave audio output. 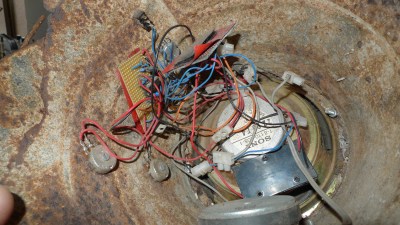 The circuits operation is easy to grasp and uses only 9 components. This ease of design and construction has allowed builders to focus more on the aesthetics of its construction, hacking it into interesting, and often unlikely enclosures and systems. One such hack is the “Atari Punk Bucket” (shown here) where the APC along with a simple amp was hacked into an old rusted bucket. The APC was built up on strip-board along with a simple amp and reclaimed speakers. [Farmer glitch] has used this as a prop in live sets and it both looks and sounds awesome.

Electro-music forum user [dnny] air-wired the circuit and replaced the pots with light dependent resistors, before cramming the whole thing into a light-bulb.

It’s also been hacked into a Game Boy, turned into a “contact theremin” (where the variable resistors are replaced with a human), embedded in guitar pedals, and been jammed into the disturbing Atari Punk Creepy Doll.

As the basic circuit is so simple, it also makes a  great building block for sequencer projects, many of which are based around the “baby 10” sequencer design. These builds add a new dimension to the APC, and sound pretty great.

Somehow 35 years after its original publication the APCs weird retro sound continues to inspire. Why not try building an APC yourself and find your own weird enclosure to cram it into?

The APC is a relatively simple application of the 555 and is a great beginners build. 555s are also ubiquitous and inexpensive parts (less than 10 cents in low quantities). The complete circuit is shown below:

The circuit operates as an astable oscillator driving a monostable with both the stable and monostable circuits implemented with 555s. The astable circuit is closely related to that shown in the TI datasheet:

The Astable 555 outputs a fixed pulse length, in my build this was about 10 microseconds. While this is great and if connected to a speaker will produce an audible tone, the APC adds a second monostable circuit. Monostable circuits trigger on an input pulse, holding the output for a period of time regardless of the input pulse length. This allow the APCs pulse width to be varied. The longer pulses seem to help drive the speaker, but also have a moderating effect on the astables output frequency as multiple pulses can get masked. The 555 monostable circuit operation is almost identical to the astable oscillator, however the trigger input is not connected to the timing capacitor. This means the circuit does not “self trigger”, requiring an input (in this case from the astable circuit) instead. A second variable resistor allows the pulse width to be varied.

While there are many kits available, the circuit is easily breadboarded using a single 556 or two 555s. If you build an interesting APC let us know!