[Jim Merullo] and his son were enjoying a nice game of Frisbee when an unfortunate dive led to an injury. His son broke his pinky finger leaving doctors no choice other than bounding his entire left hand in an unreasonably large cast. For most, this would mean no use of the left hand for several weeks, which is somewhat problematic if 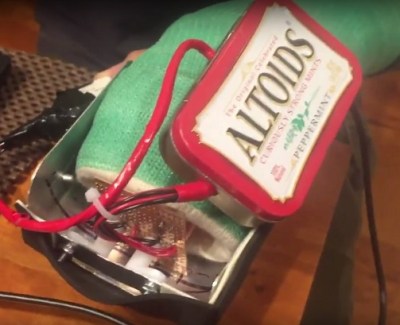 your son has a Minecraft addiction.  [Jim], however, is no stranger to the hacker community and began working on a solution. He broke out the #2 Philips screwdriver, fired up the soldering iron and got to work.

A detailed analysis of the injured left hand revealed limited use of the middle and ring finger, and full use of the thumb. Because his son played the game using his right hand for the mouse and left for the keyboard, he needed to find a way for him to operate a keyboard with the limited use of his left hand. He took apart an old USB keyboard and soldered up some tactile switches to emulate the needed key presses. After making a fashionable Altoids tin mount that fit over the cast, his son was able to enjoy his favorite video game with limited interruption.

18 thoughts on “Broken Finger Is No Obstacle To Modern Hacker”