[Josh] got rid of the standard, factory gauges on his GSXR Super-bike and installed a custom built instrument panel which displays some additional parameters which the regular instrumentation cluster did not. He was working on converting his bike in to a Streetfighter – a stripped down, aggressive, mean machine. The staid looking gauges had to go, besides several other mods to give his bike the right look.

Luckily, he had the right skills and tools available to make sure this DIY hack lives up to the Streetfighter cred of his bike. The important parameter for him was to log the Air / Fuel mixture ratio so he could work on the carburation. Along the way, he seems to have gone a bit overboard with this build, but the end result is quite nice. The build centers around a Planar 160×80 EL graphic display lying in his parts bin. The display didn’t have a controller, so he used the Epson S1D13700 graphic controller to interface it with the microcontroller. An Atmel ATmega128L runs the system, and [Josh] wrote all of his code in “C”. 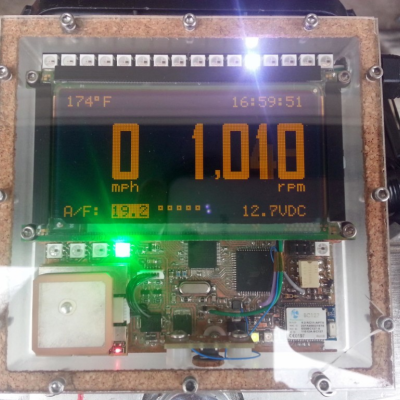 Bike speed is derived through a GPS module. The air/fuel ratios are read from a wideband O2 sensor. Other data shown on the display are the engine temperature, battery voltage, time (from GPS), and engine RPM. An ambient light sensor is used to auto-dim the display. The high refresh rate of the display, up to 240Hz, allows a large dimming range without flickering. The light sensor also controls the brightness of the other indicators. A BC127 Bluetooth module allows datalogging via the Serial Port Profile (SPP). In the future, this would possibly allow him to display SMS messages from his phone on the display. A bank of addressable LED’s can be driven to show several functions – indicator lights, RPM, battery voltage, engine temperature or air / fuel ratio – selected using a push button.

[Josh] used his CNC to mill out the housing using a 1″ thick acrylic. And the nice looking PCB is designed in Eagle and milled out using the same CNC. It’s all SMD with a large smattering of 0805 parts and shows rev B – so he’s probably made improvements over rev A. Check out the video below where [Josh] walks through some of the functions.