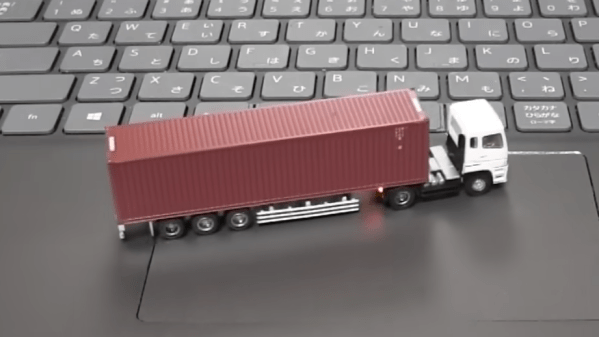 Most RC cars replicate real-world race cars or fantastical off-road buggies for outdoor escapades. [diorama111] is an expert at building tiny desk-roaming models, though, and built this exquisite micro semi-truck and trailer.

Based on a 1/150 scale truck and trailer model, the build starts with the tractor unit. It’s disassembled, and its plastic wheels are machined on a tiny lathe so they can be fitted with grippy rubber tires carved out of O-ring material. The front wheels are given hubs and mounted to a motor-driven screw-type steering assembly. A photodetector is used to aid in self-centering. The rear axle is fitted with a geared drivetrain, running off a small DC motor. Multiple gear stages are used to give the build plenty of torque for pulling the trailer. Remote control of the model is achieved over Bluetooth, with an ATtiny3217 tucked inside with motor drivers to run the show.

The microcontroller also runs a full set of driving, tail, and indicator lights. The trailer is fitted with an infrared receiver and a battery of its own. It receives signals from an infrared LED on the tractor unit, which tell the trailer when to turn on the taillights and indicators.

There aren’t too many modelers working in the RC space at the 1:150 scale. [diorama111] has form here, though, and we’ve featured a previous Toyota Crown build before.

END_OF_DOCUMENT_TOKEN_TO_BE_REPLACED 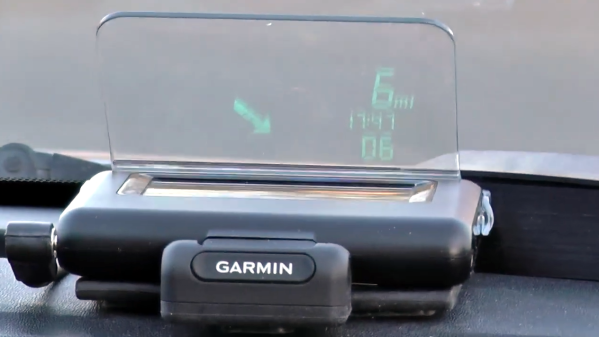 The Garmin HUD+ was a small Bluetooth device intended for the dashboard of a car, meant to be used as a GPS heads-up display for data from Garmin smartphone apps. It used a bright VFD (vacuum fluorescent display) which was viewed through a clear reflector, and displayed GPS information and directions. It was discontinued in 2015, but [Doz] was fond of his and used it happily until a phone upgrade meant it no longer worked. Was it destined for a landfill? Not if he had anything to say about it!

The first thing [Doz] tried was using an alternate Android app, but since it also didn’t work, it was time to sit back and reflect on the scope of the issue. In [Doz]’s case, he really only wanted some basic meaningful data displayed, and decided he could do away with the phone altogether if he had the right hardware. END_OF_DOCUMENT_TOKEN_TO_BE_REPLACED 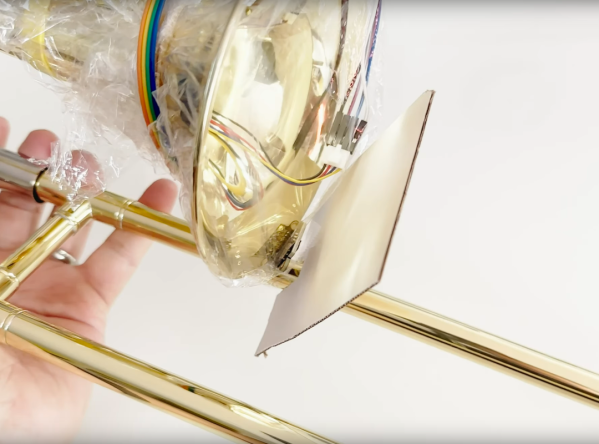 Guitar Hero was a cultural phenomenon a little over a decade ago, and showed that there was a real fun time to be had playing a virtual instrument on a controller. There are several other similar games available now for different instruments, including one called Trombone Champ that [Hung Truong] is a fan of which replaces the traditional guitar with a trombone. The sliding action of a trombone is significantly different than the frets of a guitar, making it a unique challenge in a video game. But an extra challenge is building a controller for the game that works by playing a real trombone.

Unlike a guitar which can easily map finger positions to buttons, mapping a more analog instrument like a trombone with its continuous slide to a digital space is a little harder. The approach here was to use an ESP32 and program it to send mouse inputs to a computer. First, an air pressure sensor was added to the bell of the trombone, so that when air is passing through it a mouse click is registered, which tells the computer that a note is currently being played. Second, a mouse position is generated by the position of the slide by using a time-of-flight sensor, also mounted to the bell. The ESP32 sends these mouse signals to the computer which are then used as inputs for the game.

While [Hung Truong] found that his sensors were not of the highest quality, he did find the latency of the control interface, and the control interface itself, to be relatively successful. With some tuning of the sensors he figures that this could be a much more effective device than the current prototype. If you’re wondering if the guitar hero equivalent exists or not, take a look at this classic hack from ’09.

END_OF_DOCUMENT_TOKEN_TO_BE_REPLACED 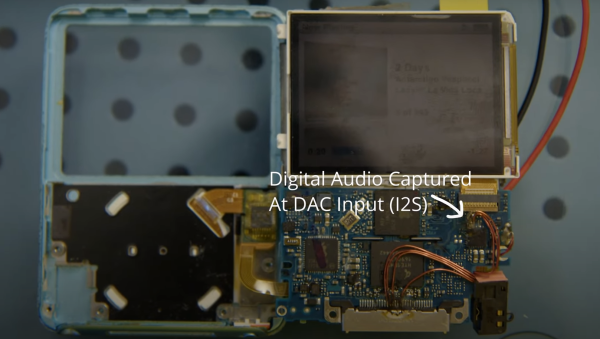 The iPod Nano was one of Apple’s masterworks, but it’s really tied down by its dependence on wired headphones. At least, that’s what [Tucker Osman] must have thought, as he spent an unreasonable amount of time designing a Bluetooth mod for the 3rd gen Nano. And it’s a thing of beauty — temperamental, brutally difficult to build, and fragile in use, but still beautiful. And while some purists try to keep their signal analog, [Tucker]’s coup d’etat is to intercept the iPod’s audio signal before the DAC chip, keeping the entire signal path digital to the Bluetooth speaker. Oh, and he also managed to make the volume and track skip buttons work, back across the wireless void.

END_OF_DOCUMENT_TOKEN_TO_BE_REPLACED 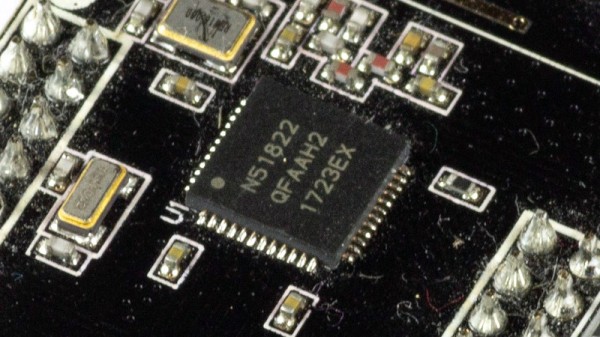 [Daniel Dakhno] kept ending up in a situation where the ability to read the status of, or control a few digital IO pins with minimal effort, would be terribly useful. Not wanting to keep compiling code, for such simple needs, they instead used a nRF51-based module as a physical interface and produced a general purpose firmware that could be configured with a simple web interface. The NRF51-IO-module was born, whose job is to pair with whatever device you have in front of you, provided it supports BLE, and give direct access to those IO pins.

Rather than acting as a rather slow logic analyser, the firmware is intended for mostly static configurations. The web application sends a configuration packet over to the nRF51 board, which then programs it into FLASH and restarts, reading the updated configuration and applying it to the IO pins. These outputs then persist as long as there is power. The read-side of the equation can also be performed via the web page, but we didn’t have a chance to verify that. The code implements the Bluetooth automation IO service as well as the binary sensor service so if you have access to applications that talk these services, then you should be able to fire it up and go with it, although we’ve not personally tested this due to lack of an nRF51 board. We noticed that the Home Assistant automation platform supports the BT binary sensor, which might be a big help for some people with a need for some wireless control and sensing.

If you need a practical example of a use for remote sensing, here’s a physical mailbox status monitor, using the nRF51. Whilst we’re thinking of Bluetooth and sensors, here’s a custom firmware for some super cheap environment sensors that frees them from vendor lock-in. 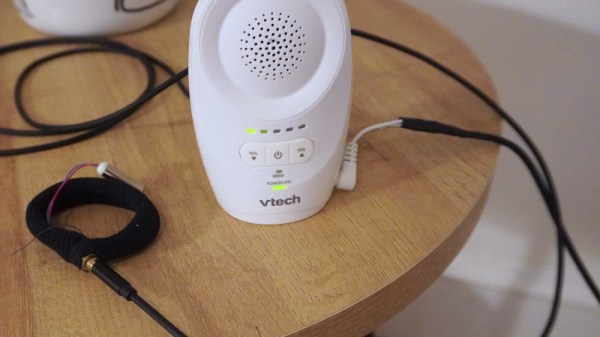 Anyone who’s ever slept through a morning’s alarm can tell you that sounds, even loud piercing ones, don’t always wake a person out of a deep sleep. Similarly, hearing a baby cry on the other side of the monitor might not always wake a parent up in the middle of the night. So what’s the solution? This haptic baby monitor created by [Guy Dupont] certainly looks like it has some promise.

[Guy] picked up a fairly standard baby monitor from VTech and popped it open to see how he could tie a vibration motor into the original circuitry. He originally thought he’d have to do some signal processing magic to figure out the amplitude of the audio, but then he realized that the five LEDs on the front of the unit that light up to indicate the audio level were already doing the hard work for him.

So he wired each of the LEDs up to the pins of a Seeed Studio XIAO nRF52840 microcontroller, and wrote some code that would poll their status a few hundred times per second. Dividing the total number of LEDs by the count of how many are currently illuminated gives him a nice average that he can use to set the intensity of the vibration motor that he’s built into a stretchy armband.

For extra points, [Guy] is also using the Bluetooth capability of the XIAO to provide a rudimentary configuration service — just connect up to the MCU with a Bluetooth serial application on your computer or phone, and fire off a value between 0 and 10 to augment the motor’s intensity. There’s also a BLE characteristic which can be read from a client device to determine the currently detected audio amplitude, which could be used to chart how well the baby is sleeping over time. Alternately, as demonstrated at the end of the video, you could use it to play Flappy Bird.

It’s an elegant modification that could potentially hold promise for parent’s who need a bit of extra help keeping tabs on their miniature humans. This isn’t the first time we’ve seen hackers try to improve upon the classic baby monitor, but this is arguably the most approachable attempt we’ve seen to date.

END_OF_DOCUMENT_TOKEN_TO_BE_REPLACED 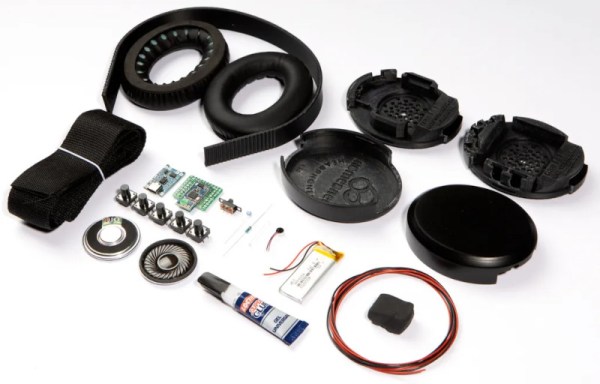 A few years back, [Shannon Ley] wondered how hard it would be to build a pair of Bluetooth headphones from scratch. Today, we have our answer. The Homebrew Headphones website is devoted to just one thing: explaining how you can use common components and some 3D printed parts to build an impressively comprehensive pair of wireless headphones for around $50 USD. 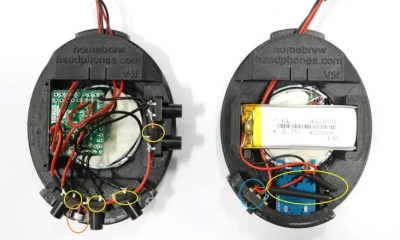 The headphones pair a CSR8645 Bluetooth audio receiver with a TP4056 USB-C charging module, a 500 mAh LiPo pouch battery, a pair of Dayton Audio CE38MB-32 drivers, and replacement ear covers designed for the Bose QuietComfort QC15. Some perfboard, a couple buttons, a resistor, and an LED round out the parts list.

All of the components fit nicely into the meticulously designed 3D printed frame, and assembly is made as simple as possible thanks to an excellent step-by-step guide. It’s all so well documented that anyone with even basic soldering experience should be able to piece it together without too much fuss.

Of course, these aren’t the first 3D printed headphones we’ve ever seen. But the quality of the documentation and attention to detail really make these stand out.