Unless you are above a certain age, the only time you may have seen a slide rule (or a slip stick, as we sometimes called them) is in the movies. You might have missed it, but slide rules show up in Titanic, This Island Earth, and Apollo 13. If you are a fan of the original Star Trek, Mr. Spock was seen using Jeppesen CSG-1 and B-1 slide rules in several episodes. But there was a time that it was common to see an engineer with a stick hanging from his belt, instead of a calculator or a cell phone. A Pickett brand slide rule flew to the moon with the astronauts and a K&E made the atomic bomb possible.

Slide rules are a neat piece of math and history. They aren’t prone to destruction by EMP in the upcoming apocalypse (which may or may not include zombies). Like a lot of things in life, when it comes to slide rules bigger is definitely better, but before I tell you about the 5 foot slide rule in my collection, let’s talk about slide rules in general.

History of the Slide Rule

The Reverend [William Oughtred] (who probably introduced X as the multiplication symbol) developed the slide rule in the 17th century, so they’ve been around for a while and were standard issue for people serious about math until the early 1970s. Actually, doing math on a ruler wasn’t a new idea even then. [Edmund Gunter] devised a sector with slide rule-like scales, but you needed a separate set of dividers to solve problems with it. [Oughtred’s] device was a circular slide rule and one of his students, [Richard Delamain], also claimed to have invented the device. Both men accused the other of stealing it.

Scholars now think that both men developed the circular slide rule independently. [Delamain] was the first to publish although [Oughtred] apparently finished his device first. However, [Oughtred] definitely developed the straight slide rule around 1650.

The Theory Behind the Rule

If you spent a lot of time calculating, you could create a table of numbers and their logs. The question is: why would you want to? The answer is simple. Suppose you wanted to multiply two numbers. I’ll do 200 and 100 first, even though they are easy enough to multiply without any tricks. If you don’t use any tricks (or heuristics, if you prefer) then you’d write 200 over 100 and then multiply each digit. With logarithms, however, we can do it much more easily. The log of 200 is 2.301 and the log of 100 is 2. So the log of result we want is the sum of the logarithms (2.301+2=4.301). if you compute 10 to 4.3 power, you’ll see it isn’t quite the right answer (19998.6) because I rounded the log of 200, but it is pretty close. Clearly, the more digits you have in your log table, the better.

What’s this have to do with a slide rule? The slide rule is effectively a log table on two pieces of wood, plastic, or metal (bamboo rules were especially prized because they were self-lubricating, felt good to handle, and were very stable). The marks are put down based on the log of the number, but the marks are labeled by the actual numbers. So the distance between 0 and 1, for example, is much greater than the distance between 8 and 9. 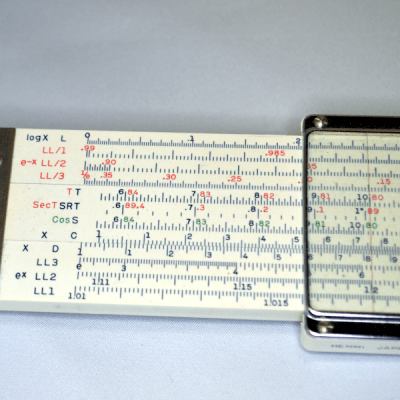 Let’s consider a very simple example: 2 times 3. If you move the slide (the C scale; see right) so the one is over the 2 on the fixed scale (the D scale), you can then count over to the 3 mark on the sliding part. This is the same as adding log(2) and log(3). Now you only have to look down from the 3 mark to the fixed scale to see the answer (6). This is very easy to understand when you have one in your hand. For those that don’t, try this web simulator. A screenshot of the calculation is found at the bottom of this section.

In some cases, moving the slide may put the answer “off the scale.” In that case, you can use the right hand side of the sliding scale (which is often marked 1, but really represents 10). Then you move to the right and remember to scale the result up by 10 (some rules offer other ways to deal with this, too).

If you want to do bigger numbers, you first scale them down and then mentally scale the result back up. So computing 20 times 30 or 2 times 30 is the exact same procedure, but you know you have to scale the answer up by the number of places you shifted. Same thing if you wanted to do, say, 25 times 3.1. You’d actually multiply 2.5 times 3.1 and then scale the result.

Division and Other Operations

Division works almost the same way but relies on subtraction. If you line up the 3 on the sliding part with the 6 on the fixed part, you can look under the 1 on the sliding part and see the answer is 2. To help you read the numbers accurately, there is a little plastic cursor with a hairline for lining up the numbers. Some rules even had a tiny magnifying bubble there to help you read more accurately.

Fancy rules will have other scales. For example, the A scale does squares and square roots and trig scales were also common. If you want a visual demo of how it works, check out the video below.

Getting the Right Answer

Unlike a calculator, a slide rule does require you to have some idea what the answer is (in scale) to interpret the result. It also relies on you being able to eyeball the difference between, say, 7.3, 7.35 and 7.351. That’s why bigger is better.

A “normal” slide rule is usually about 10 inches long. There were pocket rules that were shorter and even one on a tie tac that wasn’t very practical to use. On the other side of the spectrum were giant slide rules meant for use in a classroom (some were 7 feet long). For very precise work, engineers would use rules shaped like a cylinder. With the scales wrapped around the circumference of the cylinder, your desk could hold the equivalent of a 30 foot slide rule.

However, there was another odd sort of slide rule that was the same a 66 inch rule, but would fit in your pocket: the Otis King (also known as the Geniac; see picture to the left). At first glance, you’d think this slide rule was a telescope. But it is actually a slide rule with the scales wrapped in a spiral around the instrument. By telescoping the scales out, it was–in theory–possible to read more digits off than a normal slide rule. However, due to inaccuracy in the scale markings, it wasn’t always as accurate as it should have been.

Where to Find Out More

The Oughtred Society is a wealth of information about slide rules, including tutorials, history, and pictures of common and rare instruments and links to other interesting places.

If you’d rather be hands on with virtual slide rules, there are plenty of those and a search for “slide rule emulator” or “slide rule simulator” will turn up lots of sites like this one. Faber-Castell made a lot of European slide rules and they have an interesting page about their history in the slide rule market.

Where to Find Collectible Slide Rules

You’d think it would be hard to collect slide rules, but it is actually fairly easy and can be inexpensive. The trick is that they were so widespread and disappeared so abruptly that there are plenty of used and new old stock rules out there if you can find them. Faber-Castell even mentions they still have some that they will sell you at the bottom of their history page.

eBay is a prime source for slide rules (a quick search showed over 3000 listing related to slide rules). You may find you can get them cheaper by combing local antique stores. Often people don’t really know what they are and are glad to get rid of them. Also, if people find out you are a collector, they will often give you slide rules that belonged to some long gone relative and will be glad that someone will have it who will appreciate it and take care of it. I have several of these.

If you do want to buy a rule, there are a few things to look for. First, make sure it has the cursor and that it isn’t fogged up. Repairing or replacing a cursor is often a big ordeal. Watch out for corrosion or color leaching from a leather holster. These rules can often be saved, but it is a lot of work. The Sphere site has some good model-specific instructions for cleaning different rules, as does another Canadian site. Irregular gaps between the slide and the fixed part can spell trouble and if you can handle the slide rule, make sure the slide and cursor both operate. It is also useful to see if the rule is warped, which is probably impossible to fix adequately.

If you do acquire a slide rule, you’ll need to remember a few things about taking care of it. Although bamboo is self-lubricating, other slide rules may need a little help sliding. Pledge (the furniture polish spray) works well on wood rules. Petroleum jelly was what most people used on metal rules. A little bit goes a long way. It is important to keep a slide rule clean so that grime doesn’t get under the cursor where it is more difficult to clean and interferes with the operation of the rule.

Be careful putting your slide rule in direct sunlight. Depending on the type of rule you have, you should be careful using water, soaps, or solvents that might damage it. Be sure to read the cleaning sites I mentioned above and try to test things a bit if you can find an inconspicuous spot before you start washing the whole rule down with something.

I collect a lot of old gear and, to me, these were the computers of their day. Not everyone wants to learn Morse code, or know how to bias a tube, or be proficient at driving a stick shift. But a lot of people enjoy keeping this kind of old knowledge alive and–you never know–when the apocalypse occurs, the slide rule jockeys left might be the best computers you have for a while.

67 thoughts on “Slide Rules Were The Original Personal Computers”