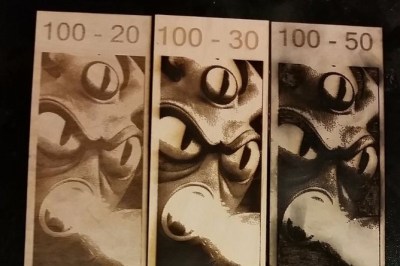 Depending on your laser cutter, the image, and type of material your engraving, you’re likely going to have to do a whole set of different tests, adjusting the settings as you go.

To make this easier for yourself, it helps to throw in some text to indicate what settings you used. That way once you’re done, you can look through all the samples and pick your favorite.

And that’s about it! You should probably bookmark his guide though, as he’s planning on adding some advanced techniques in the near future, including adding some detail back using vector lines. Good luck!