Winston Churchill once told Joseph Stalin “In wartime, truth is so precious that she should always be attended by a bodyguard of lies”. During World War II, the power of these bodyguards, in the form of military deception, became strikingly apparent. The German military was the most technologically advanced force ever encountered. The Germans were the first to use jet-powered aircraft on the battlefield. They created the enigma machine, which proved to be an extremely difficult system to break. How could the Allies possibly fool them? The answer was a mix of technology and some incredibly talented soldiers.

The men were the 23rd Headquarters Special Troops, better known as the Ghost Army. This unit was the first of its kind specifically created to deceive the enemy. Through multiple operations, they did exactly that. These 1100 soldiers created a diversion that drew German attention and gunfire to them, instead of the thousands of Allied troops they were impersonating. 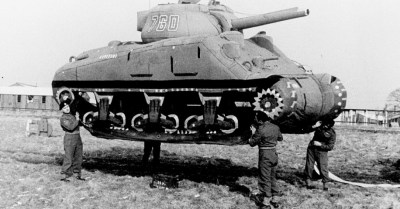 The 603rd Camouflage Engineers had spent much of the war effort hiding men and equipment. There is a lot more to camouflage than fatigue pants. Those random looking color splotches used on troop uniforms aren’t really so random. They are carefully created by artists to match the prevalent terrain in the conflict area. The camoufleurs didn’t just create patterns though. They devised ways of hiding equipment in the natural environment. If the terrain was rocky, rocks were employed to hide concrete pillboxes. Many of the 603rd’s men were artists drafted from schools in New York. They  could be found sketching any spare moment they had. This would make the Ghost Army’s non-secret day-to-day activities some of the most well documented in the war.

As part of the Ghost Army, the men of the 603rd were given a monumental task. Create the illusion, from ground or air, of entire units of tanks, soldiers, trucks, and artillery. The problem was that “fake” tanks, trucks, and artillery were still being designed and built! While waiting for their props, the group created artillery pieces from canvas, metal, and wood they had on hand. The group knew that having the actual dummies was only half the battle. A few tanks sitting in a field wouldn’t fool anyone. The tanks needed to look like they were being camouflaged. There needed to be all the trappings soldiers on the move from headquarters tents to sleeping bags to laundry. 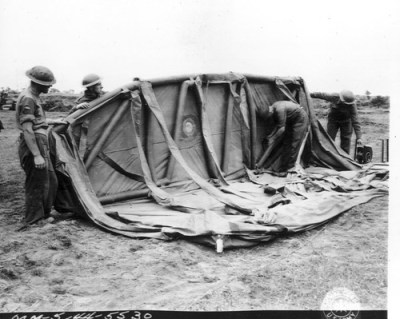 While the 603rd dressed the set, the major props were still being designed. The army tried several different types, eventually choosing an inflatable design created by Fred Patton of the U.S. Rubber Company in Woonsocket, Rhode Island. Rubber was a huge industry in World War II. U.S. Rubber was already operating at capacity building barrage balloons. Most of the work was performed by women.

Fred Patton had already created a name for himself by designing emergency life rafts used by fighter pilots in the pacific theater. The tanks he created for the Ghost Army needed to be light, fast to deploy, and most of all look like the real thing. The final design was a truss-like skeleton of inflated rubber tubes covered with a painted rubber tarp. The tanks weighed in at 93 lbs, and were easily lifted by four men. Trucks, artillery guns, even planes were all manufactured using the same methods. Hundreds of dummies were built by U.S. Rubber, GoodYear, and several other companies. As fast as they could be made they were shipped to the 603rd. 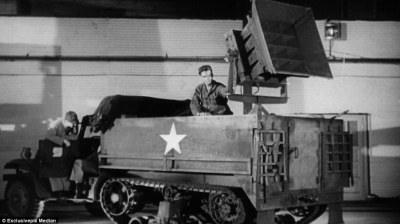 3132 Signal Service Company’s weapon of choice was an M3A1 half-track with 500 watt speakers mounted in the bed. These specially modified vehicles were designed with stealth in mind. The speakers could be stowed down inside the bed, leaving a vehicle that looked like any of the thousands of other half-tracks in the european theater. When the time came to deploy, the entire system was cranked up using a hand crank system. The soldiers quickly dubbed the crank “The coffee grinder”. Sound playback was a problem. Records would skip if bumped, or if a shell landed nearby. Magnetic tape wasn’t yet available. The solution was state of the art (at the time) wire playback units. These players used a .0006 inch steel wire as the recording medium. Achieving any kind of fidelity required high-speed, so the wire moved at 5 feet per second. Spools were 2 miles, giving 30 minutes of playback. Each half-track was fitted with two players, allowing the operators to switch spools of one machine while the other played.  As one might imagine, a wire that thin, moving that fast could – and did break. The field fix was to tie a knot in the wire and hold a match underneath it. 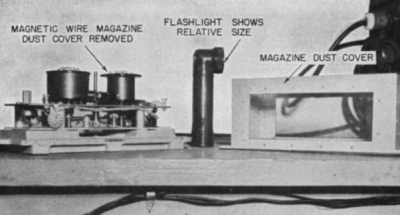 While the half-tracks were being built, Bell Labs was brought in to create the recordings. An entire mobile studio with 16 inch transcription disc recorders was sent down to Fort Knox. They recorded tanks, trucks, and men working. A number of technical issues had to be overcome to get a recording which would hold up on the battlefield. Simply driving a truck past the microphone would create a Doppler effect, and the recording would be instantly recognized as a fake. The solution to this was ingenious: place the microphone at the center of a circle and drive the trucks around it. The trucks would always be equidistant from the microphone, so there would be no Doppler effect.

To create the wire recordings used by the Ghost Army, several records were mixed together. If the deception included a river crossing, sounds of men assembling a pontoon bridge would be mixed in with the tanks, trucks, and other equipment. This was an early example of multi-track recording.

Sound travels differently depending on wind, temperature, and other weather conditions. The Ghost Army had to handle this. A jeep mounted weather station was deployed on each mission. Weather data was compared to a book of firing tables created by Bell Labs. Much like the tables used by gunners, these numbers helped the Ghost Army determine the correct direction and volume for their playback.

The Signal Company Special were a handpicked group of radio operators. Their job was to send carefully scripted radio traffic to mislead the enemy. It wasn’t just a matter of sending the transmissions though. They had to mimic the equipment and men of the divisions they were impersonating.

Anyone who has listened to ham radio operators communicate by Morse code can tell you that no two hams are alike. Some are slow and plodding, while others are a quick staccato beat of dits and dahs. Every radio operator has a style, just like everyone has a fingerprint. During the war the term for this was “fist”. The Germans radio monitoring corps knew the fists of each unit, and would be tipped off if new operators were suddenly on the scene. The Signal Company Special had to learn and mimic the fist of the real radio operators for the battle groups they were impersonating.

Transmission power was another issue. The Signal Company Special had powerful transmitters. The Germans would quickly catch on if they saw their received signal strength indicators (RSSI) jump as the Ghost Army went on the air. While the company didn’t have transmitter power meters, they did have pencils. Holding a pencil near a transmitting antenna would cause a spark to jump from the antenna to the pencil. More power would cause a longer spark. The team simply set their transmitter power levels to match the spark length of the original equipment.

The 23rd Headquarters Special Troops worked for over a year in France, Germany, and Luxembourg and other European nations. They would create deceptions – sometimes several at once, placing Allied groups in places they simply didn’t exist. Captured German intelligence proved again and again that these deceptions were successful. The men were also some of the bravest of the war. Think about it – standing in a war zone surrounded by inflatable tanks designed to deceive the enemy. If the Germans had attacked, the only real weapons the 23rd had were a few truck-mounted machine guns and their sidearms. The army of course had considered this possibility. Much of the 23rd’s equipment, most notably the sonic half-tracks, were wired with explosives. If it looked like the enemy was going to overrun them, the men were to pull a lever. They would then have 15 seconds before the charges detonated, blowing up the secret equipment before it could fall into German hands. Thankfully the charges were never needed. 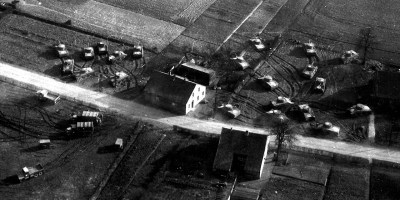 Of all the Ghost Army’s operations, the one they are most remembered for is their final deception. Operation Plunder was the codename for the crossing of the Rhine River on March 23, 1945. For nearly a week before Plunder, the 23rd carried out Operation Viersen, an effort to convince the Germans that the crossing would take place 10 miles south of the actual location. Eleven hundred men were impersonating two divisions of the Ninth army – a force thirty thousand strong. An entire airfield complete with an inflatable L-5 observation plane was created. It was realistic enough that an actual L-5 landed there, much to the chagrin of the pilot. Inflatible guns were erected and constantly monitored. Any leaks would cause the barrels to droop, which would certainly tip-off the Germans. The 23rd’s spoof radio operators coordinated with their real counterparts. As the real divisions went off the air, the 23rd came on. The transfer was seamless. The Germans had no idea they were being duped.

As with all the 23rd’s operations, the group had no idea if their plan was working until the day of the actual attack. Success would mean little or no defense. Failure would mean heavy casualties for the attacking divisions. In the case of Plunder, things went perfectly. The Allies crossed at the town of Rees, and found only a few disorganized German defenders. Captured German maps showed the ninth army groups exactly where the 23rd’s deception placed them. General William Simpson, ninth Army Commander, wrote a letter commending the 23rd for their efforts.  For the men of the Ghost Army, the hardest part of the war was over.

Many of the men of the 23rd went on to live successful lives as artists, illustrators, designers, and engineers. The most famous member was clothing designer Bill Blass. Many of them didn’t live long enough to share their stories though. The deceptions which worked against the Germans were considered vital tools of the Cold War. The Ghost Army’s operations remained largely classified for 40 years.

Numerous media articles and several books have been written about the Ghost Army. One of the more notable ones is “The Ghost Army of World War II: How One Top-Secret Unit Deceived the Enemy with Inflatable Tanks, Sound Effects, and Other Audacious Fakery” by Rick Beyer and Elizabeth Sayles. This book and Beyer’s hour long PBS documentary drew largely from a decade of interviews with the men of the 23rd. The book is an incredible read, and highly recommended.