Every twenty to twenty-five years, trends and fads start reappearing. 2016 is shaping up to be a repeat of 1992; the X-files is back on the air, and a three-way presidential election is a possibility. Star Trek is coming back, again. Roll these observations back another twenty-five years, and you have The Outer Limits, Star Trek, and riots at the DNC convention in Chicago.

History repeating itself is not the exclusive domain of politics and popular culture. It happens with tech, too: the cloud is just an extension of thin clients which are an extension of time-sharing. Everything old is new again.

For the last few years, Soft Machines, a fabless semiconductor company running in stealth mode, released the first preview for an entirely new processor architecture. This new architecture, VISC, offers higher performance per Watt than anything available on the market. If you’ve been paying attention for the last decade or so, the future of computing isn’t 200-Watt space heaters that also double as powerful CPUs. The future is low power machines that are good enough to run Facebook or run some JavaScript. With servers, performance per Watt is possibly the most important metric. How will Soft Machines upend the semiconductor market with new processors and new architectures? If you know your history, it shouldn’t be a surprise.

All CPUs have some sort of Instruction Set Architecture (ISA), and whether it’s x86, ARM, SPARC, Power, or Alpha. Different ISAs can are faster at some tasks, and slower at others. The 6502, for example, makes for a beautiful stack machine, much more so than a Z80. This is why you’ll find most old Forth implementations running on 6502-based machines. That’s not to say the 6502 was designed to run Forth, it’s just a peculiar coincidence of history that made the 6502 a better stack machine than other architectures. This, in turn, made languages designed around a stack faster on the 6502.

Different ISAs mean different performance, and this also means different power requirements for certain applications running on different processors. ARM chips are making inroads into the server market simply because of a key metric: performance per Watt. This is the key factor behind Soft Machine’s research: to produce a CPU with the highest performance per Watt. Their ISA is called VISC. That’s technically not an acronym for Variable Instruction Set Computing, but it’s descriptive enough to tell you what it is. VISC is a completely new ISA that translates x86 and ARM instructions into something else that offers much more performance per Watt.

Think of it as a video game emulator. When you play Pac-Man on your PC, the emulator converts your keyboard presses into joystick movements, and turns the CRT output into something that will run in a window on your desktop. Soft Machine’s chips do the same thing, only directly in silicon.

Yes, This Does Sound Familiar

Back in the early aughts, there was only a promise of low-power devices. While the chips of 16 years ago were low-power compared to the 100+ Watt monster CPUs of today, building an ultrabook, a tablet, or any other device that required a low power processor was hard.  The industry found an answer to this problem in Transmeta, a fabless semiconductor company that developed low-power x86-compatible chips that would find their way into the subnotebooks and tablets of the day.

To be fair, the idea of an upgradeable CPU is an interesting one. New instructions could always be added, hardware bugs could be fixed in software, and the CPU could emulate other architectures in addition to x86. There were even rumors of a hybrid PowerPC and x86 processor from Transmeta in the late 90s, something Apple would have been very interested in. Unfortunately, Transmeta was a victim of the dot-com bubble, eventually shutting down their engineering division in 2007.

History Doesn’t Repeat Itself, But It Does Rhyme 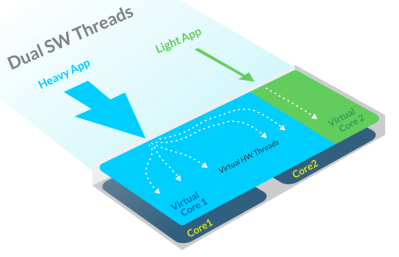 There are significant differences between Soft Machine and Transmeta. Soft Machine is doing everything in silicon, and not relying on software translators to turn x86 into whatever VISC actually stands for. There’s another trick up Soft Machine’s sleeve: multiple, virtual cores. This is a lot like how hyperthreading on Intel CPUs make a quad-core CPU appear as an eight-core CPU.

Again, Soft Machine borrows from history while taking it one step further. The Soft Machine CPU will best Intel by implementing multiple virtual cores across several physical cores. These cores will be able to scale at will, dedicating more resources to more demanding processes.

All in all, Soft Machine borrows randomly from the recent history of computing. It also doesn’t technically exist yet. The IP and design is there, but the only silicon produced so far is just test chips of single cores.

According to the company roadmap, these chips may be coming soon. An SoC designed around a 16nm process should be taped out by the middle of this year. It will, of course, be much longer before these chips make it into production and are stuffed into devices. When that happens, though, Soft Machine promises lower power devices that can perform just as well as the quad-core ARMs of today. That means more powerful smartphones, longer battery life, and very interesting teardowns when this device is actually released.

63 thoughts on “Variable Instruction Computing: What Is Old Is New Again”