Cool Tools From an Engineer Without Borders

Lawrence Bentley (he goes by Larry)

It was a pleasure to meet Larry Bentley, who gave a stellar lightning talk about the tool designs he’s been working on for the developing world.

A lightning talk is only seven minutes, but Larry spent the rest of the night with people crowding around his table to get a look at the very functional tools he built with the most basic of materials. Above you can see him holding a hack saw and a bit brace, both made out of rebar.

Larry is active with Engineers Without Borders, which has taken him to many different parts of the world. For some communities, even a hammer is a tool beyond reach. Check out his toolbox above and you’ll see a stick with a big bolt through it. Financially, this is a more approachable version of a hammer.

So how do you cut the hole in the stick to make your hammer? Larry brought along a DIY drill press he had made. Our fancy electric drill presses spin up to high RPM, but this one uses low RPM and high pressure. A bolt is used to apply leverage to the work piece while the bit is twisted by hand. Check out the close shot on that mechanism. It uses dimpled washers and some ball bearings to create a DIY bearing. And it works well enough to drill through a hardened steel file!

Live action and stop motion are opposites, right? It’s really hard to catch the effect on camera, but in person this stopped motion animation looks incredible. Colin McGinn built it by mounting figurines on a chain. Each figure is a different frame of the animation, and a synchronized LED works as the “shutter”. I can vouch for him, but if you need more proof, the patent office also thinks he’s onto something: he was just issued a patent.

Colin in his freshly screened shirt

Inside of the machine

Top of the machine with LEGO version

Colin notes that this isn’t a zoetrope, which traditionally are circular barrels with pictures or models in them. Here’s how he describes the system which is called Tru.D:

Tru.D 3D is a 3D video system. It requires no projection, no optics, and no glasses. Unlike theaters that offer “3D” movies, this is real, true 3D video

This version of the device uses a chain, and Colin’s next iteration will be a system that uses many pulleys to route the chain back and forth. The goal is to get to an animation that lasts about 90 seconds! Can you imagine this scaled up to a theater-size installation? The physics implications of that thought get really interesting.

Witch-E Project is a Dekatron Computer 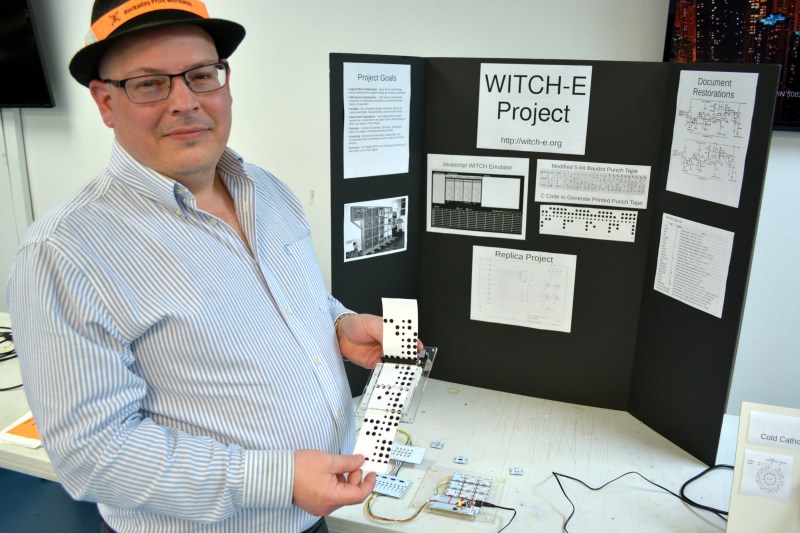 It was great to run into David Anders who has been featured a ton of times on Hackaday already (here’s an early Linux tablet hack he pulled off). He gave a talk and was showing off the progress of the Witch-E project.

The Harwell Dekatron computer was also known as WITCH. David is part of an effort to recreate the computer as an educational opportunity and they’ve come a long way with it. Of course a project like this can’t depend on having dekatron tubes and all the bits that drive them so Dave has worked up an LED-based stand-in demonstrated below.

The dekatrons are only one piece of the puzzle, though. You also need a punch-tape reader (and writer) to program the original WITCH. For the Witch-E program there is a tape-based reader that uses a computer printer to print the dots on calculator paper, with phototransistors to read back in the data. Who knew modern printers still had banner mode that is used to print on the continuous tape? On the right is a working prototype of the computer which includes a register to take input from the tape reader or switches and push them into the dekatron registers. Keep an eye the front page, Brandon will be posting a full article on Witch-E soon.

This is such a small part of what went on at the event. Thank you to Brandon Dunson for doing so much planning leading up to the highly successful night. Thank you to Dallas Makerspace for letting us use their meeting rooms. And a big thanks to Supplyframe, Hackaday’s parent company, for providing pizza and beverages for over 100 people, and for underwriting the T-shirt screen-printing.

Speaking of which, Pearce Dunlap led the shirt screen-printing. Look how calm he and Brandon look before the onslaught began. Pearce ended up doing a huge amount of work that night. We had 25 shirts on-hand and had told people to show up early because we’d run out of shirts quickly. And then a ton of people brought their own shirts!

We kept that screen busy long after our supply of shirts was done. I believe we even ended up running out of the white ink purchased for the event. It’s a good problem to have, and a metaphor for the night — so many interesting people, and so many things to do. This was a meetup I’ll remember for a long time to come.