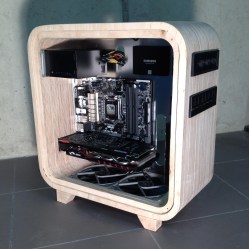 Using a jigsaw, chisel and Dremel he was able to cut out all of the fan holes and drive bays fairly easily, and thanks to overlapping plastic covers it wasn’t that hard to make everything look perfect.

The part we’re most impressed with is that he made the motherboard mounting panel himself, instead of salvaging the panel from an old tower. Some acrylic side panels and LEDs later, and the rig is done!

When it comes to custom tower builds, this desk / computer tower combination has got to be one of our favorites!

20 thoughts on “Wooden Computer Case Adds A Touch Of Modern”