Today, Apple has announced their latest bit of hardware. Following in the tradition of the Raspberry Pi, BeagleBone, and the Intel Edison, Apple have released a single board computer meant for embedded and Internet of Things applications. It’s called the Apple Device, and is sure to be a game changer in the field of low-power, Internet-enabled computing.

First off, some specs. The Apple Device uses Apple’s own A8 chip, the same dual-core 64-bit CPU found in the iPhone 6. This CPU is clocked at 1.1 GHz, and comes equipped with 1GB of LPDDR3 RAM and 4GB of eMMC Flash. I/O includes a Mini DisplayPort capable of driving a 4k display, 802.11ac, Bluetooth, and USB. In a massive break from the Apple zeitgeist of the last decade or so, the Apple Device also includes a forty pin header for expansion, much like the Raspberry Pi, BeagleBone, and Edison.

Although Apple’s first foray into the embedded computing market is a shocker, in retrospect it should come as no surprise; the introduction of HomeKit in iOS 9 laid the groundwork for an Internet of Apple Devices, embedded into toasters, refrigerators, smart homes, and cars. The Apple Device lives up to all these expectations, but what is the hands-on experience like?

See our review of the Apple Device after the break. 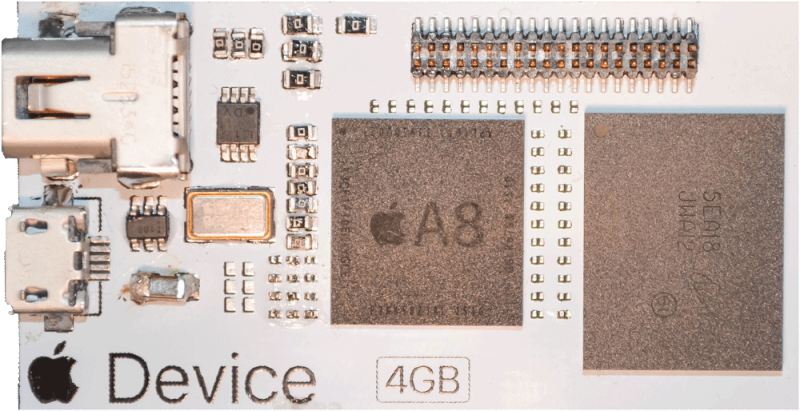 The first question anyone should ask when discussing an Apple Internet of Things board is, ‘what operating system does it run?’ This is, by far, the most pressing concern – you don’t need a purely graphical OS with a headless machine, and you don’t want an OS that is locked down with proprietary cruft.

Of course. the idea that Apple is built upon proprietary and locked down operating systems is a myth. iOS and Mac OS are built on Darwin, an open source kernel based on BSD. This is the core of the DeviceOS, and booting the device (through a terminal, no less!) provides everything you could ever need in a tiny, single board computer.

Apple isn’t committing themselves to a purely command line board here, though. Apple hasn’t built a computer like that for more than 30 years. There’s a Mini DisplayPort on the Apple Device, and of course that means a GUI. It’s obviously not as capable as the full feature OS X, but it is very useful. It’s not iOS, either; I’d compare it to a Chromebook – just enough to do the job, and not much else.

While the Apple Device is intended to run headless most of the time, in fact it’s how Apple expects you to set this device up.

To power the device, all you need to do is connect the Device to a computer and open up a terminal. This drops you into the Device’s shell, with access to the entire unix-ey subsystem. Once the WiFi credentials are set, just unplug the device from the computer, plug it into a micro USB charger, and the Device is connected to the Internet.

This USB port isn’t just for power – it’s also the way to connect keyboards, mice, peripherals, and USB thumb drives. You will, however, need the Apple Powered Device USB Hub (sold separately), that breaks out the USB into four USB Type A ports while backpowering the Apple Device. It’s a brilliant physical user interface for a device that will run headless most of the time, but still requires a few ports to be useful.

Of course, if you’re not running the Apple Device headless, you’ll need to connect a monitor. This is where the Mini DisplayPort comes in. Boot the device with the Powered Device USB Hub, plug in a monitor, and you’re presented with a ‘desktop’ that’s not really OS X, and it’s not really iOS, either. It’s  minimal, and almost chromebook-esque. 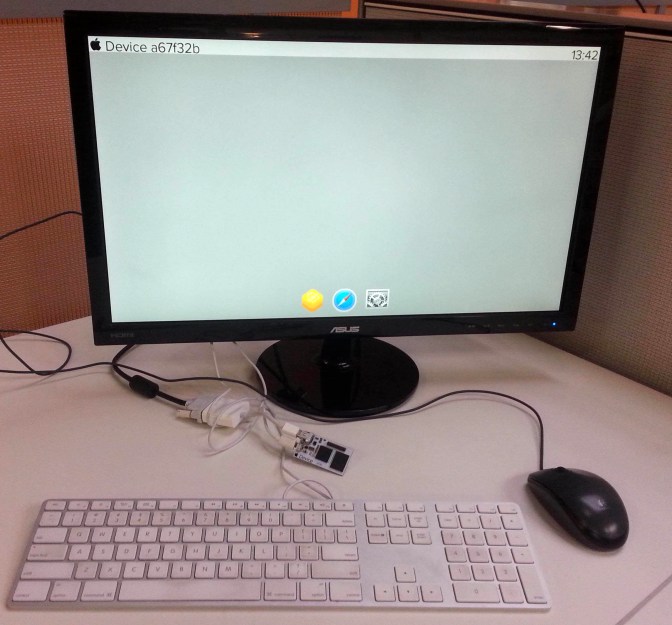 The OS looks a little bit like OS X, but it’s not. Right now, the only programs available for the DeviceOS are the HomeKit app, the Safari browser, and playing around with the settings. If you want to look something up on the Internet, just click on the Safari icon. If you want to change the WiFi address or the device name, just go into the settings.

Configured as a Desktop, you can see the brilliance of Apple in the Device. It’s not a desktop computer, but neither is a Chromebook. Considering most people can do most of their work on the web, this is a game-changing device. Combine it with Apple’s iCloud, and you have something that will be exceptionally popular.

The Downside of Apple

Apple has their hands in a lot of cookie jars. The Apple TV is their device for streaming videos and music to a TV. Giving the Apple Device this functionality would cut into sales of the Apple TV. Since the Apple Device sells for $100 less than the Apple TV, this would be a bad move, even if Apple is sitting on Billions in cash.

Also, even though the Apple Device has a 40-pin header right on the board, there is no documentation anywhere of what these pins can be used for. The Raspberry Pi’s 40-pin header is well documented and can be used for everything from environmental sensors to VGA and audio output. Apple makes no mention of what these pins can do, although we do expect a few ‘shields’ to be released in short order.

Built around the Apple A8 chip, the Apple Device is extremely capable, especially compared to its assumed competitors, the Raspberry Pi and Intel Edison.

In terms of raw horsepower, the Apple Device handily beats out the Raspberry Pi 2 and the Intel Edison. This should be expected. The A8 chip in the Apple Device is extremely powerful and beats the other single board computers handily.

But what about graphics? The GPU in the Raspberry Pi is a huge reason why that board is popular, and being able to stream a few movies to the Apple Device would mean the Apple TV will be quickly taken out of production.

3D acceleration is better, but when it comes to h.264 encoding, the Apple Device falls a little short. Even compared to the rather sluggish Raspberry Pi Zero, the Apple Device is no match for the berry boards.

This is purely speculation, but I suspect h.264 encoding is disabled in the Apple Device. The reason is clear – Apple already sells a single board computer meant for streaming video to a TV. Giving the Apple Device the same capabilities as the Apple TV would cut into that market. Sadly, it looks like the video capabilities of the Apple Device are limited to digital signage. That’s disappointing, but given Apple’s strategy for the last twenty years, not unexpected. We do look forward to the eventual hack, root, or exploit that will unlock the powerful graphics capabilities the A8 chip already has.

Right off the bat, the Apple Device is an amazing piece of hardware. It’s incredibly small, has a lot of computational power, and works with all the HomeKit devices you already own. The ability to just plug it into a computer and have a tiny *nix device connected to the Internet is great, and comparing the user interface to the Raspberry Pi, Beaglebone, or any of the Intel offerings isn’t even a fair comparison. Apple has taken the best design from their entire product line that anyone – including engineers and the tech literati – would find useful.

However, there are a few glaring limitations of the Apple Device. h.264 decoding is a big one, as the most popular use case of the Raspberry Pi seems to be setting up retro game emulators and streaming video from a network. Apple does what Apple will do, and the Device would probably cut into the market for the Apple TV.

Another shortcoming is the issue of the 40-pin header. Right now, there is no documentation whatsoever for the very small pin header located on the board. I couldn’t find anything in the *nix system relating to peripherals that might be connected to those pins. In any event, the pins are on a 1.0 mm pitch, making it very hard to plug a scope or meter onto one of those pins if you don’t have the mating connector. If anyone has seen this connector in the wild, I’d love to hear about it in the comments.

What Apple has done here is no different from the Raspberry Pi or any of the other ARM-powered single board computers released in recent years. They’ve taken a CPU from a smartphone that is now a few years old, added a few peripherals, and slapped it on a board. By itself, this is nothing new. That’s exactly what the Raspberry Pi is, and what all of the Raspberry Pi ‘clones’ are, from the Banana Pi to the Odroid.

While the hardware is somewhat predictable, the software is where this really shines. It’s not built for iOS, given this device is designed to run headless most of the time. It can be used purely through a command line, making this the perfect device for the Internet of Things. It’s also a tiny desktop computer, and somewhat usable given the power of the A8 chip. Since the Apple Device sells for about $50, Apple really hit it out of the park with this one, despite the obvious and not so obvious shortcomings. We’re really looking forward to Apple taking the popularity of the Raspberry Pi and other single board computers to the next level, and this is the device that will do it.

As a quick aside, it should be noted the Apple Device is technically Apple’s second single board computer. The first Apple product, the Apple I, released in 1976, would today fall into the same market as the Raspberry Pis, Beaglebones, and now the Apple Device. If you take the launch of the Apple I to be the date Apple was founded (April 1, 1976), today is the 40th anniversary of the first Apple product. The Apple I is now a museum piece and the finest example of Apple’s innovation over the years. The Apple Device follows in this tradition, and is nearly guaranteed to be held in as high regard as the board that came out of the [Steve]s’ garage.

156 thoughts on “Apple Introduces Their Answer To The Raspberry Pi”