This Saturday, April 23, we’re hosting a worldwide Hackaday meetup called World Create Day, and we want you to be a part of it. The 2016 Hackaday Prize is all about solving technology problems, and if you’re looking for an excuse to meet up with a few fellow tinkerers, this is it. 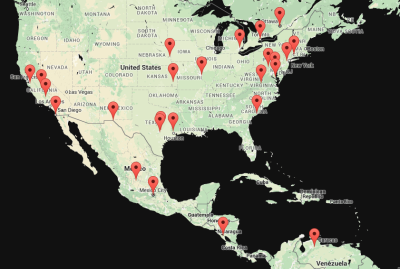 Right now, we have dozens of Hackaday meetup hosts planning their own get together. It’s six continents of awesome, and that’s only because winter is starting to set in on Antarctica. Today we’re taking a closer look at what’s lined up in North and South America. We have meetups from the shores of Venezuela to the birthplace of the worst president the United States has ever had. We have meetups in Baltimore and El Paso, and from Silicon Valley to New York City.

The goal for these meetups is to find fellow hackers and tinkerers, suss out a few ideas on what you’re working on, and start a project for The Hackaday Prize. We’re wrapping up the first stage of The Hackaday Prize, Design Your Concept this coming Monday, where all you need is an idea. Saturday’s World Create Day is the perfect time to brainstorm your tech solution with some friends and get it submitted ahead of the deadline. If you have an idea for the next great Internet of Things, an application for the RISC architecture that is gonna change everything, or just want to show off your flubber prototype, this is the event to go to.

This is the opportunity to find some like-minded hackers in your neck of the woods, and it’s not an event to miss. If you’re looking for a meetup in your area, check out the map here. If you’re interested in hosting one of these shindigs, fill out this form and we’ll set you up.

We’ll take a closer look at the meetups planned on other continents as the week progresses. If you’re still thinking of getting your own meetup on the map, now’s the time!

9 thoughts on “World Create Day: A Meetup Across The Americas”