If we already had cathode ray tubes, why not use one of those as the light source for a projector system? The answer is that you can’t get enough light out of CRTs to make this feasible. The attempts made for this method drove them at really high voltage, pumped out X-rays which meant lead shielding was required, and any slight mishandling of the components would instantly burn out the system. A fundamentally different solution was necessary, and that would be the Eidophor. Some of the examples of Eidophor use include broadcasts of John Glenn in orbit in 1962, some of the screens in NASA mission control in 1969, and boxing broadcasts in the 1970’s. 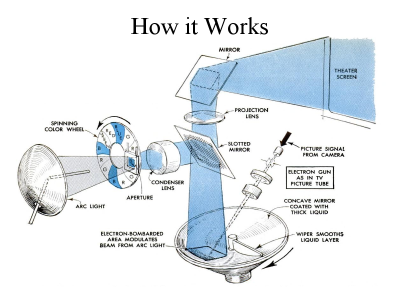 Development started by Dr. Fritz Fischer just before the second world war. The gist of the system is based on a parabolic mirror which focuses light on a slotted mirror. The light path then reflects on another mirror covered with a thin layer of oil and back through the slotted mirror to the projecting optics. The static state of the system lets no light through. However, if the oil film on the third mirror is disturbed it redirects the light slightly and allows it to pass through the slotted mirror. To project an image, the oil film is disturbed by an electron beam passing over its surface. At this point, anyone with even a basic understanding of these principles will recognize this as an incredibly complicated system to get working reliably.

Charging the oil film just enough to get the intensity desired was quite a trick. The most successful method was by varying the speed — or velocity modulation — at which an electron beam passed over the surface, faster for less surface disturbance, and slower for more. The oil needs to be “refreshed” as the film builds up a charge over time. So this mirror rotates somewhat slowly while a wiper redistributes it in a uniform layer (presumably both thickness and charge). 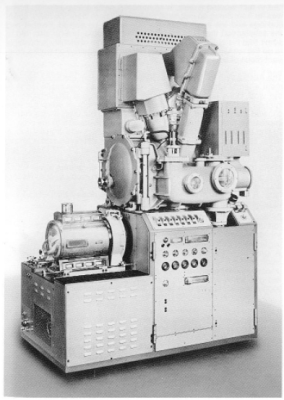 Mike does a great job of explaining the challenges that went into keeping an Eidophor working. It ran at vacuum but wasn’t totally sealed, so it either needed a few hours to get down to working vacuum or must be left on at all times. The oil film was very susceptible to vibrations so it needed to be big and heavy. The filaments driving these were specialized and burnt out frequently, after about fifty hours of use. And get this, the result was a 2% light efficiency; 98% of the produced light never made it to the screen!

The advent of LCD projectors completely killed the Eidophor. It was already limited in use because of cost and complexity. The ability to shine light through an LCD and switch the frames electronically was a quantum leap in simplification and for the first time unlocked live video broadcast to the masses. But the engineering that went into earlier technology is well worth celebrating. Mike is looking for any leads on engineering manuals, or locations of Eidophors that survived. If you can help with that or any other information, let us know in the comments below.