There were a lot of very technical talks at Hackaday Belgrade. That’s no surprise, this is Hackaday after all. But every once in a while it’s good to lift our heads up from the bench, blow away some of the solder smoke, and remind ourselves of the reason that we’re working on the next cool project. Try to take in the big picture. Why are you hacking? 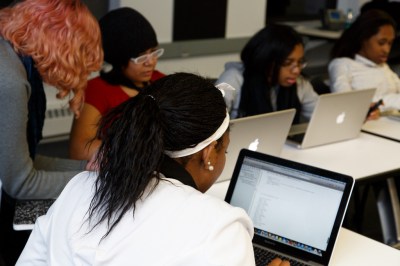 [Phoenix Perry] raised a lot of big-think points in her talk, and she’s definitely hacking in order to bring more women into the field and make the creation of technology more accessible to everyone. Lofty goals, and not a project that’s going to be finished up this weekend. But if you’re going to make a positive difference in the world through what you love to do, it’s good to dream big and keep the large goal on your mind.

[Phoenix] is an engineer by training, game-coder by avocation, and a teacher for all the right reasons. She’s led a number of great workshops around the intersection of art and technology: from physical controllers for self-coded games to interactive music synthesis devices disguised as room-sized geodesic domes. And she is the founder of the Code Liberation Foundation, a foundation aimed at teaching women technology through game coding. On one hand, she’s a hacker, but on the other she’s got her eyes on a larger social goal.

Nikolai Tesla and the Purpose of Technology 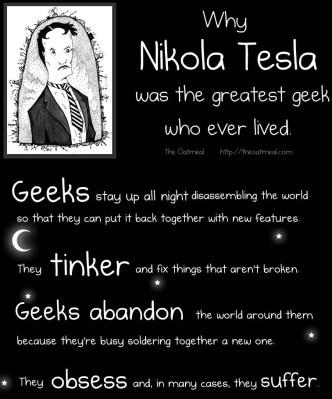 Particularly appropriate for a talk in Belgrade, [Phoenix] opened up with competing conceptions of the role of technology in the world. On one side is Nikola Tesla who had a radical vision for how technology should be integrated into society; it should be free, open, for the benefit of all. On the other side are people who seek to limit and capitalize on technology — making as much money for themselves as possible. [Phoenix] puts up J. P. Morgan as the bad guy here, contrasting Tesla’s dream of free energy for everyone with Morgan’s plans to get super-rich by monopolizing access to electricity and gas. She asks if we think technology should improve people’s lives or if it is just a means to make money.

Related, but not exactly the same idea, is the question of whether technological progress is limited or limitless. Are good ideas, developed and implemented, really a scarce commodity to be hoarded and milked for all they’re worth, or does the sharing of ideas lead to more ideas in a virtuous cycle? Even if the truth lies between these extremes, it’s worth stepping back and looking at how the incentives in our societies work against technological progress. Governments enforce intellectual monopolies on ideas through the granting of intellectual property rights, and firms operate with the only objective of maximizing profit or shareholder value. In this environment, it’s an uphill battle for the technological rebel.

[Phoenix] sees a schism between the makers and the technicians, and worries about what this is going to mean for technology. On the one hand you have the “Maker Movement”, which is basically white, male, and rich. She cited research into the cover of Make Magazine, and over nine years and 39 covers, 85% of the people on the cover are male, 15% of them are female, and 100% of them are white. Make‘s readership is also at the top of the income distribution. (Full disclosure: Hackaday’s audience, according to the analytics anyway, is even more male and although we’ve got a lot of student readers, those of you engineers out there with decent-paying jobs are bringing up our average salary as well.)

Her point is that there’s almost certainly other people out there — people who aren’t rich, not necessarily white or male — who are also tech hackers. Why aren’t they getting publicity, “movements”, or good jobs? [Phoenix] points out that a lot of these other people are on the assembly lines actually producing the technology: under-educated, often underpaid, and sometimes even skewing female. 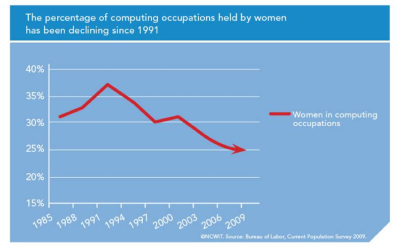 [Phoenix] thinks that they’re being held back by economic and educational barriers. As the cost of higher education becomes more and more expensive, it limits the number (and type) of people that we have making technology. The share of tech jobs in the economy is on the rise, but at the same time the percentage of women in computing is falling. Why? As the cost of college tuition is skyrocketing, it certainly limits the prospects of someone whose parents don’t have a few hundred thousand dollars sitting around, or who is not willing to go that far into debt.

On the other side, we see the rise of “alternative STEM education” — the self-taughts and the people teaching each other for free. The ready availability of information shared on the Internet and through hackerspaces can be a powerful antidote to the exclusivity of expensive higher education. [Phoenix] asks us to look out for other barriers to bringing everyone along on the quest for new technology, and think of ways to work around them. 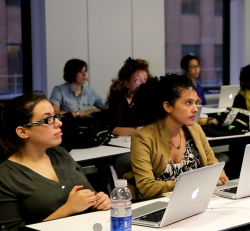 But all of the alternative education in the world won’t help if employers aren’t hiring these people, and if the workplace is biased against them. [Phoenix] claims that this next step is a cultural barrier, and that what’s needed is therefore a cultural change. She makes a list of ten things to change in our (work) culture. As with alternative education, we see a lot of these points being addressed, from codes of conduct in our hackerspaces to a de-emphasis of formal training over practical experience in coding.

But then she turns to the kind of projects that we make, and asks if they’re “deeply” accessible. That is, does it make it easier for people to modify and build with the technology that it embodies, or does it hide things about what’s really going on. Do the things we build help bring others into the field? We think that’s an interesting additional angle to view our hacks from, and certainly a noble goal.

“You are responsible for inclusion and diversity in technology and culture.”

And so why do we care about any of this? Because [Phoenix] thinks that technological ideas are like genes, and the sum of them that are shared are like our collective gene pool. The more variety that we’ve got in the gene pool, the better off we all are — the more kooky ideas that brush up against each other and make the next big thing.

That’s something that we can really get behind here at Hackaday. We try to see the best side of every project we post, and summarize the aspects that we think are most likely to inspire you. We definitely lean toward [Phoenix] and Tesla’s view of the role of technology in human society — that technology should enrich our lives and that we do it best as a community working together, and that means sharing rather than hoarding ideas.