The most common bending methods, but surely not the only ones, are air bending and bottoming. They can be done on the same press brake and usually don’t require more than 25 tons of pressure for general purpose workshop use. A press brake also comes with a manual or CNC-controlled back gauge that allows positioning the bend line accurately. Just like all presses, press brakes are a bit deceptive about their danger potential. They look calm and move slowly, but the moment their force hits the material, things can happen very fast.

However, if you can’t get access to a press brake, you’re not completely out of luck. There are slotting techniques, where the material is weakened at the bending line just enough to place a nice bend into up to 1/4“ steel using nothing more than a bench vise.

Air Bending uses a punch tool and an often V-shaped bottom die. The profile of the punch defines the bend radius while the stroke depth defines the bend angle. Since the stroke depth is adjustable on the machine, air bending lets you bend sheet material to an arbitrary angle without replacing the die or punch tools. The opening of the bottom die should be chosen adequately depending on the material thickness and bend radius, and a good rule of thumb is 6 to 12 times the material thickness. Doing so will ensure good results and a long tool life. However, you’ll quickly notice that even professional workshops use their 3/4“ bottom die for just about anything, so that’s that. After the punch is released, the material will spring back a little, which must be compensated by overbending the material. Air bending is not great in terms of angular accuracy but can accommodate different materials, material thicknesses and bend angles without retooling.

Just like air bending, bottoming uses a punch and a V-shaped bottom die. However, the punch will press the material against the inner surfaces of the bottom die, so the angle of the bottom tool defines the bend angle. Therefore, the method requires separate bottom dies and retooling for every bending angle as well as significantly more pressure. However, it is more accurate and has less springback than air bending. What you will usually find in a general purpose workshop or makerspace is a brake press equipped with a 90° bottom die for bottoming, and for any bend angle smaller than 90° the same die will be used for air bending. However, since bottoming involves greater forces, it is also more important to use the right dies. A rule of thumb says that 8 times the material thickness makes a good bottom die opening. However, since the geometrically correct opening also depends on the bend radius, there are better ways to calculate the opening width.

To define the bend region and reduce the force required to bend a part out of sheet metal down to something you can handle without a brake press, slots can be cut at the bending line to selectively weaken the material. It is similar to kerf bending, but less flimsy. Slotting is a great technique to get custom metal enclosures and frames for small robotic projects and even large unloaded structures. However, since it obviously weakens the material, it’s a no-no for heavy load-bearing parts that rely on the structural integrity of the bend region. There are even patented methods using certain slotting patterns, and even if the idea behind them is simple enough, they can be quite ingenious.

Depending on the bending angle and radius, the material in the bend region deforms. To get the final part dimensions we aim for, we have to take this into account beforehand. Most professional CAD tools, such as Solidworks or Rhino, will do all the bending math for you, but unfortunately, many other good tools, such as Fusion 360, OpenSCAD or FreeCAD require you to get additional plugins, make use of online calculators , or do the math by hand.

Let’s start by assuming you wanted to build a 90° bracket out of an infinitesimally thin sheet of material, or to be practical, a piece of paper. Because it’s so thin, it actually does not contain any material, so it will bend without material deformations. To make it even simpler, we choose a bend radius of 0, which makes it a crease. In this theoretical case, the length L of the strip we need to cut out will be the sum of the two sides of the bracket, A and B.

If we now add a bend radius, our bracket will not consist of two straight sides A and B anymore, but by two shortened legs, which I will call a and b. The legs are connected by an arc of length c. So far, so good.

To think about bending a sheet of metal that has appreciable thickness, focus on an imaginary central sheet, the so-called neutral line or neutral axis, within the thickness. This neutral line behaves just like the thin sheet above, remaining undeformed during bending. The only two things we have to bear in mind mind are that the material thickness t offsets the bend radius r’ of the neutral line by half the material thickness, and our legs a and b get a bit shorter. Real-world materials like steel and aluminum do not behave exactly like this central line, but the concept of the neutral line is still useful to describe them.

As always, real-world materials do not behave as simply as our models. After the material has taken on its new shape in between the hardened steel tools of the press, this central neutral line will be pretty messed up by the interaction. We can’t really know the course of the neutral line after the bend without a detailed and rather complex model of the material characteristics. To make things easy, an imaginary neutral line based on a simplified approximation can be used to predict the length of the flat pattern: 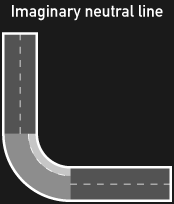 To do this, a correction factor, k, is introduced. The factor offsets the neutral line piece in the bend region from its center path until it has the length of the corresponding region of the flat pattern. The k-factor is empirically determined for a given material, material thickness, bend radius, and bending method. It reflects all real but unknown distortions in the bend region.

Since the k-factor depends on several factors, tables of empirically determined k-factors for given setups are used. Using the k-factor, we can now calculate the bend allowance „BA“, which is the length of flat material that goes into the bend region. It’s simply the arc length of the „imaginary“ neutral line piece, that has been offset by the k-factor:

Of course, the approximation is only as realistic as the k-factor used, and it makes sense to keep your own table with k-values for the materials you intend to work with. However, the following values are a good starting point:

When slotting sheet metal at the bend axis, the material’s average density in the bend region is decreased. There is no particular rule for how much the material should be weakened but as a rule of thumb, a density of 20% for up to 1/8″ steel is a good choice. Going with 20% density, the bridge width w is 1/4th of the slot length s as shown in the graphic below. For the bridge width w, I suggest not going below 3/4th of the material thickness T.

However, the radius should not be too large, and as a rule of thumb, it should be below 2/3rd of the material thickness.

Slots can be shaped in a way to control the bend in a more predictable and material-independent way. While cutting non-straight slots into metal may sound trivial, there are still lots of patents in this field. For educational use and DIY-projects, the related patents by Industrial Origami Inc. may still be a great resource. They contain a whole catalog of more intelligently engineered slot patterns, such as the smiley-shape, the self-indexing hinge, a twisted hinge, and other origami-like methods.

Most of the patterns are designed in a way that allows the material to self-index against itself after the bend has been made. For example, the diagonal bridges of the smiley pattern will shorten as they are twisted by the bending, effectively pulling the two flat sides together edge-to-edge, so there is practically no bend radius and no material dependent bend allowance to account for. This method allows for very accurate bends with neglectable deformations and remarkably strong parts. The formula for the outside setback can still be used, and since the OSSB is purely geometrical, no k-factor tables are required.

To get our flat pattern length L, we have to know the length of our the straight legs, a and b. Of course, if you design a part using CAD, you can just read the dimensions from your CAD tool. However, in case you just have a technical drawing with only the essential dimensions – or a sketch on a napkin – you’ll have to do that manually.

The difference between a side length (A or B) of a bend and its leg (a or b) is called the outside setback or “OSSB”. So the leg’s lengths are defined as:

For a bend angle α smaller than 90°, and generally, when A and B are dimensioned from the apex to the edge, the formula for the outside setback is always dependent on the bend angle:

For bend angles larger than 90°, and generally, when A and B are dimensioned from the tangent of the bend to the edge, the outside setback is independent from the bend angle: 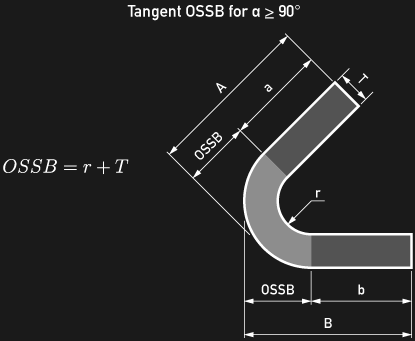 Unless you’re bound to a certain norm, you can still dimension A and B from the apex to the edge and use the first formula, even if your bend angle larger than 90°, as long as it is smaller than 180°. Still, for larger angles, this becomes highly impractical, given that the apex moves far away from the bend. 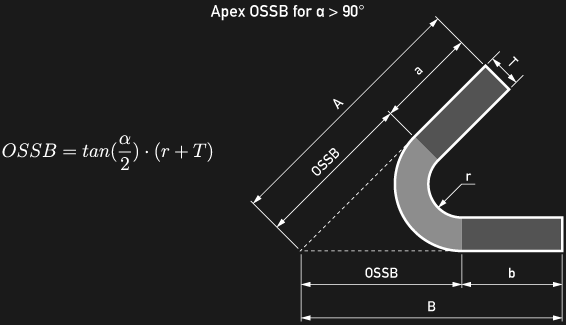 Finally, we can put everything together and calculate the flat pattern length L that we need to cut the metal to by putting the pieces together:

In practice, the flat pattern length is always shorter than the sum of A and B, so everything above can be condensed in the difference between A + B and L, which is called the bend deduction „BD“.

So, knowing the basics about bend allowances and bend deductions, you should be able to build your own custom steel enclosure, robot frame or mounting bracket using a brake press or the slotting method and a vise. And you don’t need to own a laser or plasma cutter to get custom shapes out of stainless steel or aluminum. Local workshops and online services will happily feed your design into their highly automated fabrication pipeline and even small quantities can become affordable. To round this up, enjoy the following video introduction to the press brake by Dan Gelbart:

49 thoughts on “The Art And Science Of Bending Sheet Metal”