[Mikhail] sent us a teaser video for a hack he’d done (embedded below). He takes a Bluetooth LE fitness tracker dongle and reflashes it spit out the raw accelerometer data and trigger events. He then wrote a phone app that receives the data and uses the device as an alarm, an on/off switch, a data-logging device, and more. 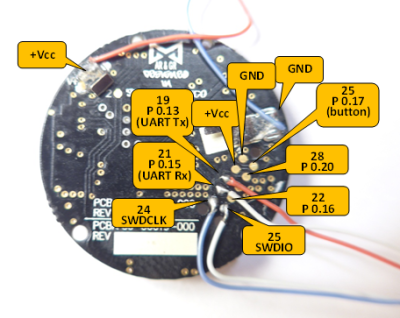 We thought it was cool enough that we asked [Mikhail] for more detail, and he delivered in spades! Inside the device is a Nordic NRF51822, their ARM Cortex + Bluetooth chip, an accelerometer, and a bunch of LEDs. [Mikhail] mapped out the programming headers, erased the old flash, and re-filled it with his own code. He even added over-the-air DFU re-flashing capability so that he wouldn’t have to open up the case again.

The cellphone side of the equation is equally important, and equally impressive. [Mikhail] used Cordova to make a cross-platform browser-based mobile app that talks with the BLE device. If you’re thinking of doing anything similar, this is a great springboard to get started.

In the end, [Mikhail]’ fitness tracker does a lot more than the original developers intended, and the project has a professional level of attention to detail. Amazing. Even without that level of detail, with this hack you’ve got an inexpensive NRF51822 development platform, should you be interested in fooling around with Bluetooth devices.