Last week on the Hacklet I covered coffee hacks. Not everyone likes coffee though. A good portion of the world’s population enjoys a nice cup of tea. Different cultures are rather particular with how they prepare their drink of choice. Americans tend to use teabags, while British, Chinese (and much of the rest of the globe) generally prefer loose tea leaves. Everyone has their own particular style, which has led to quite a few tea hacks. This week’s Hacklet is all about some of the best tea projects on Hackaday.io! 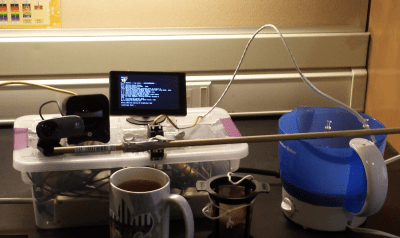 We start with [James P.] and Tea Pi. Tea Pi is designed to emulate commercial tea makers costing hundreds of dollars. The heart of the operation is a Raspberry Pi, making this one of the first Linux powered tea makers we’ve ever heard of. An Adafruit PowerSwitch Tail allows the Pi to control a standard tea kettle. The Pi monitors water temperature with a DS18B20 temperature sensor. A simple servo drops a tea basket into the water for brewing. When the time is up, the servo pulls the basket up and the tea is ready to serve. [James P] planned to add voice control to his tea creation. I’m betting that would be pretty easy with Amazon’s voice services for the Raspberry Pi. 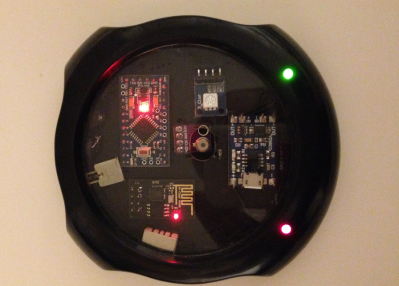 Next up is [Tom] with Eye-O-Tea. With this project, even your cup of tea can join the Internet of Things. Eye-O-Tea essentially is a web connected coaster with temperature monitoring built right in. Temperature is measured with a Melexis MLX90615 IR thermometer. An Arduino Pro Mini reads the temperature and passes it on to an ESP8266 WiFi module. The entire device is powered by a LiPo battery, and neatly housed in a gutted cup warmer. On the cloud side, [Tom] used ThinkSpeak and freeboard.io to make an interface he can access with his cell phone. If his tea is too hot, Eye-O-Tea will let him know. It will also send him an SMS if he’s forgotten his cup and it’s going cold. 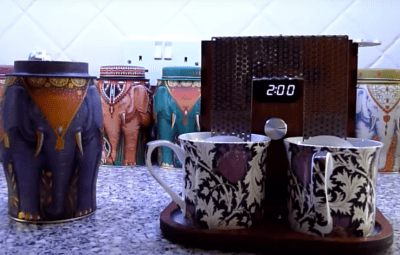 Next we have [Adrian] and ChaiBot. Chaibot was created by [Adrian’s] son [Oliver] to combat a common problem. Both father and son would pour cups of tea, then get involved in a project. By the time they came back, they had ink. ChaiBot steeps the tea for a set amount of time, stirring every minute. The mechanics of the project came from an old CD-ROM drive. A PIC16F887 runs the show, ensuring the steep time is accurate, and activating the motor drive. When the tea is done, an ESP8266 sends a push notification to the user’s phone. The project is housed in a wooden case that fits perfectly on the kitchen counter. 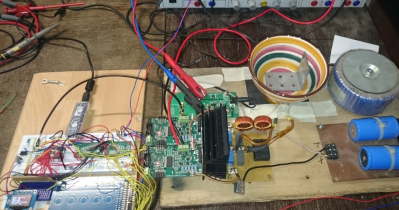 Finally, we have [Siggi] with Camper Induction Cooker, a 2016 Hackaday Prize entry. [Siggi] needed hot liquids on the go, but he didn’t want to fool around with heating elements. An induction heater was the way to go. A Cypress PSOC micro controls the system. Metal travel style mugs can be used without modification. For ceramic or plastic mugs, a metal washer (hopefully coated with something food safe) acts as an immersion heater. The project is definitely a bit unwieldy at the moment, but I could see [Siggi’s] idea being incorporated into automotive cup holders. [Siggi] put his project on hold back in June. I hope seeing his work on the front page will get development moving again.

If you want to see more tea projects, check out our new tea projects list. See a project I might have missed? Don’t be shy, just drop me a message on Hackaday.io. That’s it for this week’s Hacklet, As always, see you next week. Same hack time, same hack channel, bringing you the best of Hackaday.io!