This is a super cute hack for you Linux users out there. If you have played around with SSH, you know it’s the most amazing thing since sliced bread. For tunneling in, tunneling out, or even just to open up a shell safely, it’s the bees knees. If you work on multiple computers, do you know about ssh-copy-id? We had been using SSH for years before stumbling on that winner.

Anyway, [Felipe Lavratti]’s ssh-allow-friend script is simplicity itself, but the feature it adds is easily worth the cost of admission. All it does is look up your friend’s public key (at the moment only from GitHub) and add it temporarily to your authorized_keys file. When you hit ctrl-C to quit the script, it removes the keys. As long as your friend has the secret key that corresponds to the public key, he or she will be able to log in as your user account.

END_OF_DOCUMENT_TOKEN_TO_BE_REPLACED 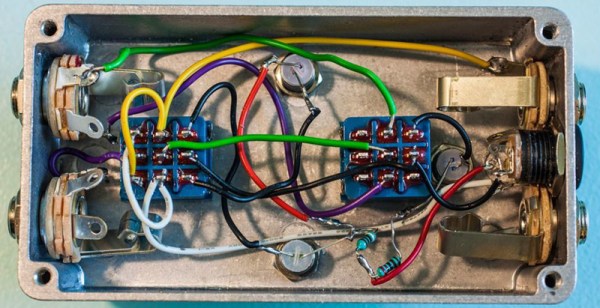 [Alexbergsland] plays electric guitar. More accurately, he plays two electric guitars, through two amps. Not wanting to plug and unplug guitars from amps and amps from guitars, he designed an AB/XY pedal to select between two different guitars or two different amps with the press of a button.

The usual way of sending a guitar signal to one amp or another is with an A/B pedal that takes one input and switches the output to one jack or another. Similarly, to switch between two inputs, a guitarist would use an A/B pedal. For [Alex]’ application, that’s two pedals that usually sell for $50, and would consequently take up far too much room on a pedalboard. This problem can be solved with a pair of 3PDT footswitches that sell for about $4 each. Add in a few jacks, LEDs, and a nice aluminum enclosure, and [Alex] has something very cool on his hands.

The circuit for this switcher is fairly simple, so long as you can wrap your head around how these footswitches are wired internally. The only other special addition to this build are a trio of LEDs to indicate which output is selected and if both inputs are on. These LEDs are powered by a 9V adapter embedded in the pedalboard, but they’re not really necessary for complete operation of this input and output switcher. The LEDs in this project can be omitted, making this a completely passive pedal to direct signals around guitars and amps.