On Saturday the Hackaday community turned out in force to try something new. The first Hackaday Unconference was held in three places at the same time, and I was in Chicago and was amazed at the turnout and variety of presentations. The image above sums up the concept quite well, everyone shows up ready to give an eight minute talk, but as a whole, no one knows what to expect. Well, we should have known to expect awesome and that’s what we got. 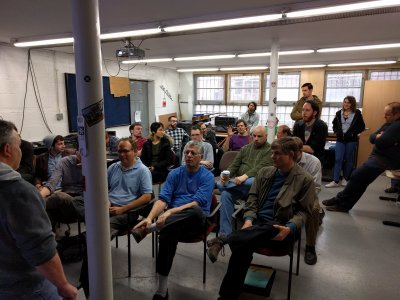 As usual, people are excellent… to one another and in adapting to the fluid nature of the day. Pumping Station: One, a renowned Hackerspace in the Avondale neighborhood near downtown Chicago, opened their doors for us. Not knowing how many people to expect we set up two presentation rooms with a third on deck just in case it was needed.

We just barely squeezed everyone in one room for the first track but ended up splitting into two for part of the day. Here you can see that second room filling up. Even so we still had a handful of presentations that didn’t get a chance to shine — we simply must do this again so they can have the chance and because I had such a great time! 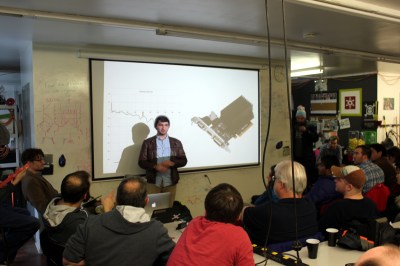 It’s really tough to report on all of these talks. Some people came with prepared talks including slides and props. Many came with talk topic and structure in mind and gave their talk adapted to some of the others they had heard that day. Even those who didn’t plan to speak were easily cajoled into giving us two minutes on what projects they’re exploring these days.

Many of our readers who couldn’t be there asked us to record it, but we didn’t want the presence of cameras to dampen anyone’s spontaneity, so we left them off. Here’s some of the highlights I remember from Saturday.

[Cameron Blocker] has been experimenting with graphics cards, using the GPU and abusing the VGA outputs as signal generators. After all, a VGA video card is just three fast DACs outputting specific signals on a very strict timing scheme.

When someone says “$50 Thermal Camera” the next word out of your mouth should be “impossible”. Or so I thought. [Michael Shaub] was at the Uncon to prove me wrong in a big way. He hit up everyone’s favorite mixed-bag of tools (Harbor Freight) for a non-contact thermometer. He put it on a two-servo gimbal and then followed the software rabbit hole to stitch together heat-map overlays onto a still image. This is really excellent work and we’re trying to compel him to post more details so make sure to like and follow his project. It takes some time to scan in an entire image, but if you’re looking for poorly insulated areas of your home what’s the rush? This is fun to build and will work great for that purpose.

I greatly enjoyed [Bob Baddeley’s] talk on design considerations when you want to manufacture in plastics. This was huge expansion on the peek we got with his Injection Molding article. But the talk included a range of manufacturing processes, starting with differences between thermoset and thermoplastics and walking through ever avenue extending outward.

[Chris Gammell] has recently adopted a new design for a standard expansion header on his electronic designs. These are electronics used to teach design and layout skills in his Contextual Electronics courses and so the header is called the CE Header. Having presented to the room it was interesting to hear the discussion on good and bad choices (should the serial pins be on opposite sides of a dual row header or does that complicate addon routing, etc.)

A couple of weeks ago I heard on the radio that the average age of farmers in Wisconsin is now 60 years old. (I live in Wisconsin if that helps the story make more sense). This is alarming to me as I know that Japan is seeing something of a crisis with the rising age of their farming population. I’ve been reading and researching about the issue and gave my talk on some of the promising hardware advances to help these farmers, and some of the social issues that need to be solved to help get more new blood interested in feeding the world.

Would it be a Hackaday event without some hands-on Hardware? [Will Caruana] is trying to build a reliable single-cell injector for biohacking (and also more traditional lab work of course) at a greatly reduced rate. One method he’s using is a blowtorch and glass pipette. Of course Pumping Station: One has a hot metal workshop and one of the members happily brought his blowtorch over for the demo. Very cool… er… hot, very very hot. 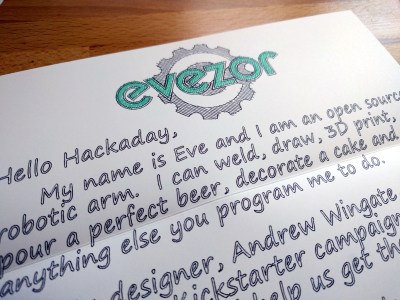 There were even a few talks on products pushing toward a launch. [Adam] and [Will] came down from Milwaukee to show off the MagneTag rig they’ve been building. It’s a chest and back plate that you strap on, then have a fight with foam swords. Scoring is automatic (seen on the screen behind them) and there was an engineering challenge that went into detecting hits on the shields but not elsewhere. Get this, they have the swords encased in foam by the same company that makes the cheeseheads.

[Andrew] was showing off some of the videos his made with his robot arm Evezor. The belt and servo driven arm looks pretty incredible and he loaded up the plotter tool and had the bot write us this letter.

Learning and Curiosity as Lifestyle

What makes an Unconference so special is that it’s about sharing excitement about learning. This means listening to what other people are working on, and spending time thinking about something that you might not otherwise have been exposed to. This is incredibly important and it’s what The Hackaday Prize is all about. That makes these Unconferences a great event to happen a few days before we launched this year’s challenge.

One of the final talks in Chicago was a talk by [Dan White] about why we learn so much outside of school. The gist of the discussion is to explore who we can “learn by doing” in a school setting more than we already do. But for me, I’ve made it my mission in life since I left school to learn in my free time. That’s what Hackaday’s all about and I don’t think I would have made it this far with electronics and fabrication without the inspiration I’ve drawn from Hackaday over the years.

We have the power to inspire and this is why we host the Hackaday Prize every year. Every single entry has the power to change the world. Maybe not directly, but the pollination of knowledge, the infection of excitement, and the power of inspiration. Build something that helps you strengthen your skills and your knowledge, but this time, also think about how to fix a problem, to inspire someone coming up behind you trying to learn their own hardware skills. It’s a way to give back for all the people and projects that helped you get here.

We already thanked Pumping Station: One for hosting. Their officers and members pitched in to help with staffing, organization, preparation, and cleanup. Thank you! Digikey, Microchip, and Supplyframe are our awesome sponsors for the 2017 Hackaday Prize and provided financial support for this event. We had a bounty of wonderful food, swag, and giveaways because of that. It turns out hackers like bananas 2:1 over clementines, toasted sandwiches are a huge hit, and everyone loves local craft beer although they will make fun of you for carding people at the keg.

Thank you all for attending. I hope to make Hackaday Unconferences a regular thing all over the world. Feel free to pester us to come to your Hackerspace for one, but you don’t have to wait for us. If you interested in hosting a live event we’ll help you get started, just let us know.

5 thoughts on “The Think Tank At The Chicago Unconference”