Saturday night marked the fourth annual Hackaday BAMF meetup. The night when weary exhibitors close up their booths at Bay Area Maker Faire and head over to O’Neil’s Irish Pub where the real fun starts. There are many drawbacks to having a booth; you’re on your feet all day repeating the same small snippet to everyone passing by, and usually you don’t get much of a chance to mingle with friends old and new.

Walking into the meetup, it was striking to watch aching bodies slow with weariness perk up to the energy and excitement of the Hackaday Community incarnate. Join me after the break for a peek into the fun of the evening. 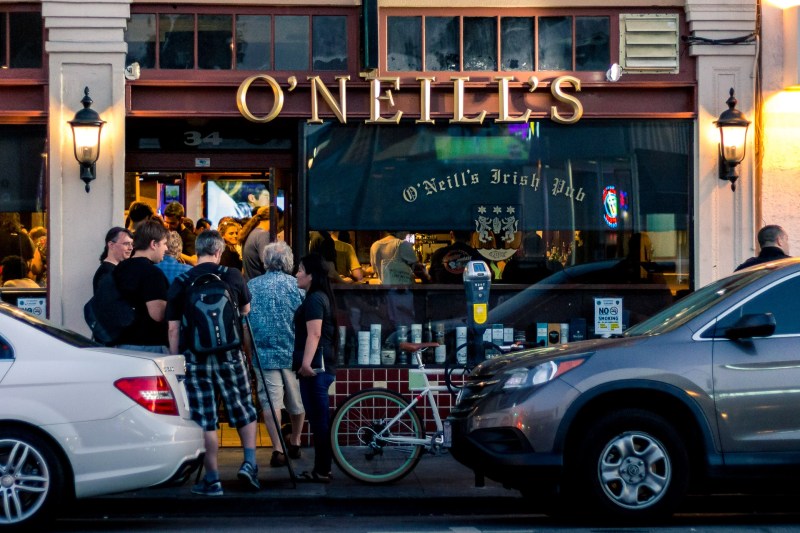 The place filled up fast and our geekdom chased out the locals faster than in previous years. The bar was packed to capacity, cleared out a bit, and was packed again until late in the evening. I figure we were still at about 60% of capacity when I snuck away for the night at about 1 AM. You can see above that the party spilled out in the street at one point. A keen eye will pick out Paul Stoffregen (creator of Teensy) finding a quieter and cool place for a conversation.

We applied a bit of social media pressure to convince Joseph Prusa to stop by. Here you can see him taking a look at the tiny portable 3D printer that Whosawhatsis brought along with him. We snapped a candid shot of Chris Gammel catching up with Hackaday Prize judge Dr. Christal Gordan and our good friend Krux who runs DEF CON Darknet. (He showed me this year’s badge but forbade me to take pictures.) If you’re into titans of media you could hang out with Karl Bowers of The Spark Gap podcast and Ben Heckendorn of the Ben Heck show.

Wearables were popular this year. Someone brought along a HoloLens (I can call that a wearable, right?). Shawn Hymel from Sparkfun seems waaaay to excited to see Shulie trying the headset out. An EL wire hat fit in quite well at the meetup. And it was great to run into a binary wristwatch that was built around a Silicon Labs microcontroller for a nice change from the oft-featured AVR and PIC offerings.

There was a little robot whose purpose was to pass the beer (oh… my-god). We were treated to a demo of an in-progress software defined radio. You can get a close look at the board above. The wide shot shows the frequency counter verifying what the transmitter is putting out.

All in all an amazing night, and one that made hitting the third day of the fair in 90 degree weather all the harder. But it was certainly worth it. Thanks for everyone who stopped by, there are a few more pictures to look through on Hackaday.io. If you didn’t make it to this meetup, you missed something special — mark your calendars for next year!