I have some aluminum building-set parts on hand and just got a second rotary tool, so I thought I’d try my hand at making a light-duty CNC mill—maybe carve up some cheap pine or make circuit boards. This post explores some of the early decisions I’m facing as I begin the project.

Of primary importance is the basic format of the mill’s chassis. Gantry configuration or put everything in a box of girders? How will the axes move–belts or racks? How will the Z-axis work, the assembly that lowers the tool onto the material? Finally, once the chassis is complete, or perhaps beforehand, I’ll need to figure out how I intend to control the thing. 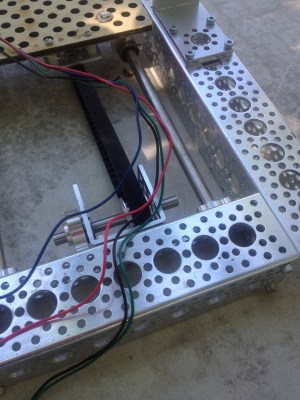 The main building blocks I’m using to build my mill consists of a building set called Actobotics. The set includes a variety of beams, most especially the hole-studded channels you can see in the image to the right. They also dabble in a T-channel profile as well as mini-channels used for smaller projects.

The line also includes mounts for a variety of standard steppers, servos, and DC motors, plus all the clamps, adapters, bearings, and axles you need. Their entire product line works together and that’s sort of why I chose it–that and also because I had a fair amount on hand already.

However, this is purely for convenience. I’m not married to using other materials in this project and fact it would be hard not to. For instance, logic dictates it would need a bed of some sort. Also, intrigued by to Othermill’s acrylic side panels, I was considering adding something similar to my project to help add a little rigidity.

Actobotics follows two hole patterns simultaneously–0.770″ hole spacing horizontally, 1.5″ diagonally, with both 0.14″ and 0.5″ holes pretty much covering each part. This reduces channel weight and gives you a bunch of options for attaching things, whether native Actobotics elements or anything else. You can use a laser or CNC to mill custom connector plates that interact with this hole pattern, allowing to easily add Pi enclosures and whatnot to the chassis.

They have a fairly broad line of Actobotics parts at SparkFun.com or you can find them at ServoCity.com.

The Base I’ve Built

Okay, so I’ve already got a first draft of the base with a belt drive and stepper in place. You can see it in the image at the top of the page. I can change it and probably will. Still, it’s a good place to start.

My first thought was to go with a 4″ build platform. I built the base without necessarily thinking in terms of a bed–it was for a different project. The length of the Y axis was arbitrarily chosen based on the rods I had on hand–one footers. Working with it now, it feels like it’s too long for a 4″ platform. But that made me thinking, maybe I could have a rectangular build platform. Maybe 4″x 6″?

Then I realized there’s a way I can be scientific about this. The linear bearings offer around 10″ of movement as currently configured. Would that not suggest a 5″ build surface because the entire bed must cross over the X axis? The piece of wood I have currently attached to the bearings is 6″ wide, and it’s scraping the sides. Now I’m thinking a 5″ x 5″ build platform. While I can think of a few projects that I’d like to make that would be bigger; it’s the perfect size for what I have in mind in the near term. 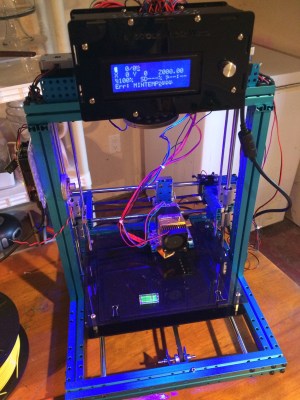 The next step is to visualize how the Y axis will look and work. The gantry, if you will. They’re not all alike, of course. When talking about smaller desktop mills, beam structures seem to fall into two broad categories: the classic gantry configuration–a crane with supports on two sides–or else something of a box configuration.

Gantries usually employ a very heavy horizontal beam upon which the toolhead travels back and forth to make that X-axis magic. I’m thinking of an X-Carve Inventables as an archetype. Box-types–like the Othermill, for instance–have lighter X-axis support but there is more of a frame or box that surrounds the bed to provide the maximum amount of stability.

My first idea for the gantry involves a series of girders around a foot in height, allowing only a very modest Z height adjustment–just enough so I can change the bit without too much difficulty. One of my major concerns with using a building kit to make a CNC tool is the fact that the thing is likely to wobble, and wobble makes for poor-quality output.

Much of my opinion on the subject is colored by my experience with another CNC tool, my Makeblock Constructor 3D printer. Made from a kit, it consists of Makeblock’s signature blue beams with NEMA steppers and Open Source clone hardware. It put out some serviceable prints but there was always a nasty wobble to it. One of my future projects is to strengthen Horus, as I pretentiously call my printer, with some bracing beams and a nice heavy base–or maybe some Othermill-like acrylic panels. Anyway, this experience reinforces (ha) the notion that if I do create a mill, I want it to be as wobble-resistant as possible.

My Constructor wobbles quite a bit. Screws come undone, and some of the parts are thinner than others. This is a reality I’m certain to face. 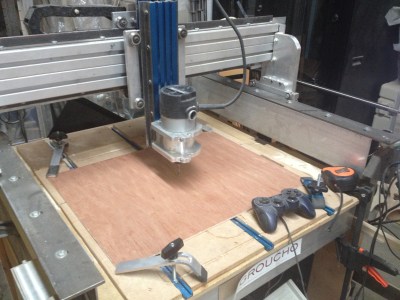 Aluminum beams are very light. My mill will have to be bolted to a surface or it’ll vibrate off the table. Some of the most successful small-sized CNC mills employed very heavy-duty beams.  One of the large mills we have at the hackerspace (seen to the right) has a massive slab of 80/20 T-slot, some of that 80×160 boat anchor stuff that looks pretty much indestructible. So you say steel is a better choice? Well, I don’t got any.

In addition to the frame not being steady, toolhead vibration is an other issue. I’ll need some kind of clamping mechanism (maybe 3D-printed?) to hold the shaft extender or the rotary tool itself if I go that route, with some sort of vibration damping pads.

Another factor could be the proportions of the mill. What I mean is, would low and squat make for more stability than tall and thin? The Constructor’s gantry rises a full 12″ above the build platform. Granted it’s a 3D printer where there is an expectation of, well, 3Dness, but even for that product it was probably too high.

I’m aiming to lift the tool the bare minimum to swap bits in and out, so I certainly wouldn’t want anything as tall as the Constructor’s gantry. Low and squat sounds intriguing, but with the lightness of the aluminum channel taken into consideration, I’m starting to think that more of a box shape is the way to go.

There are so many to-dos on the project I’m fit to bust a head vein. Gotta design the tool-holding mechanism and the rest of the chassis. Research CNC controllers. Build a heavy table or platform onto which to bolt the CNC. Decide whether to use the shaft extender or just the tool itself in a clamp.

So tell me, you loyal few who made it to the end of this piece, do you have any suggestions for how I could proceed, or stories of your own experiences? Bust them out!

19 thoughts on “CNC Mill Out Of A Building Set”