Blame it on the falling costs of printed circuit boards, the increased accessibility of hardware design tools, the fact that GCC works on microcontrollers now, whatever the ‘maker movement’ is, or any one of a number of other factors. There’s a hardware demoscene now. Instead of poking bits, writing code, and dividing by zero to create impressive multimedia demonstrations on a computer, there is a small contingent of very creative people who are building their own physical hardware, just for the hell of it. They’re pushing boundaries of what can be done with hardware design, demonstrating manufacturing know-how, and turning a (small) profit while doing it. This is badgelife, the tiny subculture dedicated to creating custom electronic conference badges.

At Hackaday, we’ve been doing a deep dive into the rigors of this demoscene of hardware, and last week we had the pleasure of hosting a meetup with some of the big players of the badgelife community as guests of honor. There were, of course, talks discussing the trials and tribulations of designing, manufacturing, and shipping hundreds of pieces of hardware on a limited budget with not enough time. If you want to know how hard electronic design and manufacturing can be, you want to check out these talks below.

Our first guest for the Hardware Developers Didactic Galactic last week was [Kerry Scharfglass]. On paper, he’s an electrical engineer who sometimes does some coding and has consulted on everything from medical devices to Internet of Things door locks. Perhaps more interestingly, he paid for his trip to Defcon last year by building neat hardware that people wanted.

We took a look at [Kerry]’s badge last summer, calling it the Diamond Age badge, the Drummer’s Badge, a Sympetrum, but it’s best known as the dragonfly badge. In the middle of this dragonfly-shaped PCB is an STM32, with ten APA102 RGB LEDs placed around the perimeter. There are IR LEDs studded around the body, and when a few badges are pointing at each other, the RGB fading syncs up. It’s an homage to Neil Stephenson and a cool bit of electronics, too.

While we got the story of the dragonfly badge existing last summer, we didn’t get the low-down about how this badge came to be. Following on the tail of other popular badges, [Kerry] simply decided he should build a badge. The wish list of features included lots of blinky, wireless communication, rechargeable batteries that last the entire conference, a crypto puzzle, alcohol sensors, a phone app, and a way of interacting with other badges. Common sense slowly drifted into [Kerry]’s manufacturing plan, and he whittled down these requirements to an attainable goal: just some blinkies with AA batteries. 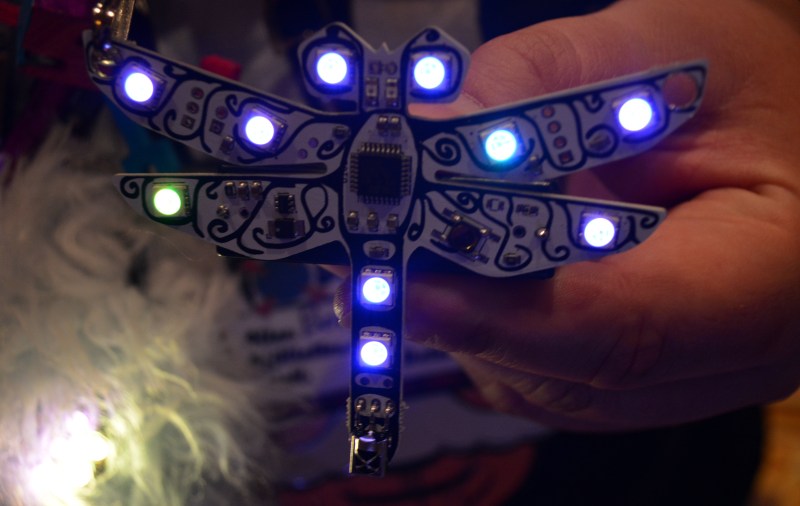 After several prototypes, [Kerry] got the schematic down and slowly transitioned over to the dragonfly-based badge. There are some clever manufacturing tricks on this badge: there are holes for both AA and AAA battery holders, and solderable jumpers for the clock and data lines on the APA102 LEDs. If one LED fails, you can just rip it out and put a solder bridge in. There’s no way you’re going to be reworking badges on the conference floor.

Was this dragonfly badge a success? Hugely so. With 25,000 hackers at Defcon, there were more than enough people who wanted to throw down some cash and get their hands on some sweet, sweet blinky bling. This badge paid for [Kerry]’s trip to Defcon, with a little left over to pay for a few prototypes for this year’s badge.

Building a badge isn’t just something some random guy does. Possibly the most successful badges are those put together by the villages at Defcon. The car hacking badge is always spectacular (and always plugs into your car), the DC Darknet badge last year was beautiful, and the Crypto and Privacy Village badge was an amazing demonstration of supply chain logistics. 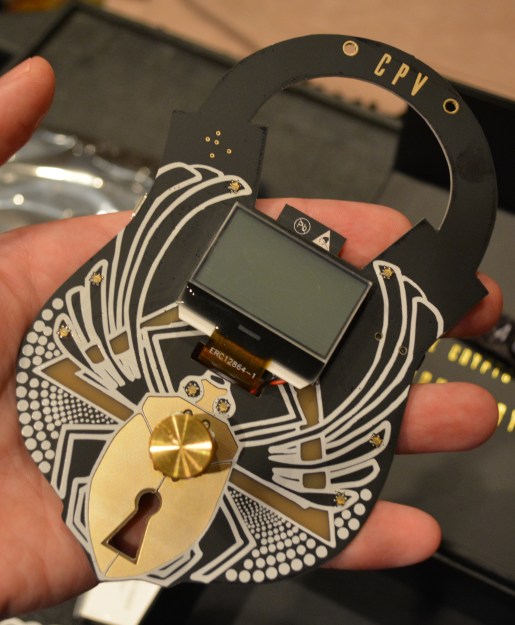 [Whitney Merrill] is one of the brains behind the Crypto and Privacy Village. A few years ago, she noticed independent badges floating around Defcon, and along with [supersat] and a few of her other compatriots, decided to create their own badge from scratch. They’ve been doing this for a few years now, and they’ve learned a lot of lessons so far.

The Crypto and Privacy Village badge for last year was an amazing padlock with rotary encoders bedazzled with beetles. The electronics are based on the ESP-32, and there’s a backlit display, cap touch sensors, and a headphone jack to listen to Defcon radio all weekend. Getting to this point wasn’t easy; it involved receiving boxes of Beats headphones loaded up with batteries (thanks, China), tracking ships entering the port of Long Beach, professional assembly, semi-professional rework, and foil-embossed boxes.

These are not talks to miss. Anyone can build one of something, but building dozens or hundreds of a thing is something else entirely. There are logistics, there’s manufacturing, and somehow or another, you’ll need to get those badges out to Vegas. The cheapest way to do this, by the way, is to buy a casket, pay off a funeral home, and get the special air freight rates corpses get.