Last week, tens of thousands of people headed home from Vegas, fresh out of this year’s DEF CON. This was a great year for DEF CON, especially when it comes to hardware. This was the year independent badges took over, thanks to a small community of people dedicated to creating small-run hardware, puzzles, and PCB art for thousands of conference-goers. This is badgelife, a demoscene of hardware, and this is just the beginning. It’s only going to get bigger from here on out.

We were lucky enough to sit down with a few of the creators behind the badges of this year’s DEF CON and the interviews were fantastic. Right here is a lesson on electronic design, manufacturing, and logistics. If you’ve ever wanted to be an engineer that ships a product instead of a lowly maker that ships a product, this is the greatest classroom in the world.

Although badgelife may seem like a bunch of hardware engineers sitting behind a pick and place machine for a weekend’s worth of lulz, this is a masterclass of product design and manufacturing. Badgelife is product development, and unlike many other hardware design jobs, the ship date will not slip for any reason. The hardware must be done on time, and if you’re not shipping all the features you promised everyone will be upset. Badgelife is the best experience you’ll ever get in engineering for production, product design, and manufacturing.

The Greatest, and Most Coveted Badge 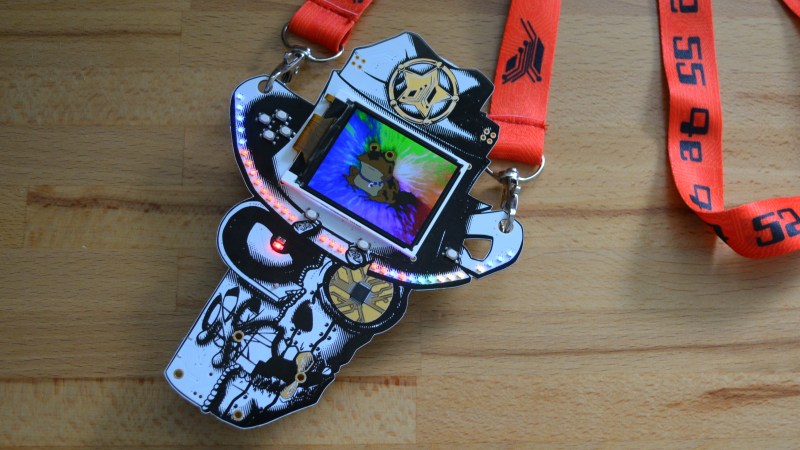 One of the most coveted badges at this year’s DEF CON was the one from AND!XOR. This team of engineers consisting of [zapp], [Hyr0n], [Bitstr3m], [8bit] and a few others have been creating independent badges for three years now. Their Bender badges are consistently held up as the example of what badgelife is all about: custom hardware turned into art on a tight production schedule. How do they do it? Effectively, they work backwards. Instead of throwing a microcontroller and some art on a board, they first figure out what they want the badge to do, and select their parts from there. The cost of prototyping, the number of expected failures, and the total cost of goods sold is all taken into account before the design is finalized. Only then do they make the prototypes and reach out to Kickstarter to fund the rest of the production run. This year was exceptional in that regard: AND!XOR sold 300 of their fantastic Bender badges overnight. Hundreds more were sold at the con.

When it comes to manufacturing challenges, there’s no comparison to the main DEF CON badge. This year, the official badge was brought to life by a hardware collective known as Tymkrs. DEF CON reached out to the Tymkrs after seeing their incredible cubic badge from last year’s Cyphercon, and after months of work the Tymkrs managed to ship over 28,000 badges for this year’s DEF CON. 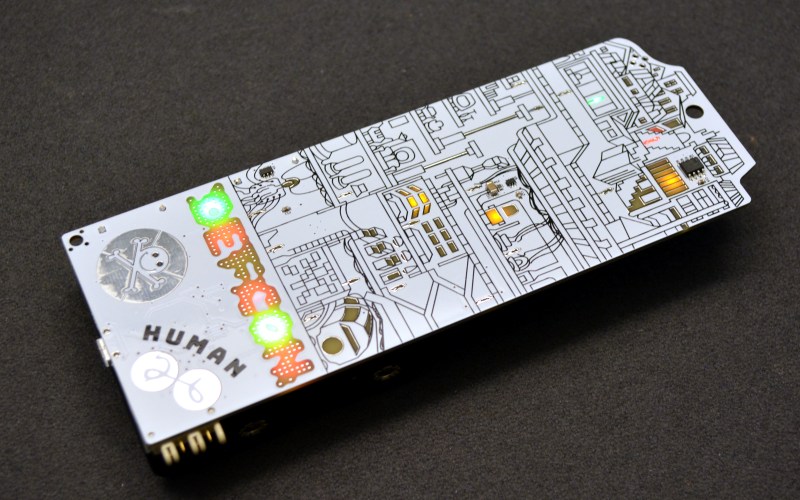 The theme for this year’s DEF CON, and this year’s DEF CON badge, is 1983, the year before the Orwellian hellscape of 1984. This is the year where it was still possible to change something, even though Oceania had always been at war with Eastasia. This idea gave the Tymkrs an idea for a game in the badge, where your choices affect those around you. This is done by ‘mating’ different badge together through a hermaphroditic connector. Plug two badges into each other, and it affects the status of each badge.

If there’s one problem with manufacturing 28,000 of something, it’s programming the microcontroller on every board. The best way to program thousands and thousands of chips is to have them programmed off the assembly line. For any DEF CON badge with a production timeline of a few months, there simply isn’t time for that. The next option is to have the chips programmed before they’re put on a reel. This is what the Tymkrs planned to do, but three weeks before the con their supplier reached out and told them they had no idea how to program these microcontrollers. Without a moment to spare, the Tymkrs said to ship them to the fab in China, asked the factory to hire some temp workers, and had dozens of people programming badges as they came out of a reflow oven. If you’re wondering how high someone’s blood pressure can go, just ask the Tymkrs.

No One Says You Need To Ship Thousands

But of course shipping a con’s worth of badges isn’t for everyone. Sometimes you don’t need to go big to make a huge impact on badgelife. Sometimes you only need to ship a few dozen units.

One of the stand-out badges of this year’s DEF CON was the Coin-Op badge from Hackaday Editor in Chief and Mister Hackaday himself, [Mike Szczys].

[Mike] has been involved in a number of badge projects before, from the 2017 Superconference ‘camera’ badge to the 2018 Belgrade retrocomputer badge, but he hasn’t gone deep and built a badge entirely by himself before. This changed with the Coin-Op badge, a badge inspired by the greatest video game ever, Galaga.

The design for the Coin-Op badge began on July 1st, and consisted of a Galaga ship-shaped board loaded up with LEDs and microcontrollers. [Mike] assembled almost sixty of these by hand in his basement by the end of the month, just in time for DEF CON. This was one of the great badges this year, and would have been in the running for the Badgelife contest if [Mike] wasn’t also tapped for his expertise as a badgelife contest judge. It just goes to show you don’t need to produce hundreds of badges — sometimes just a few dozen will make a huge impact.

It’s A Demoscene of Hardware

The rise of badgelife is one of the greatest advances in DIY hardware. This is the only place you’ll find people designing and manufacturing items on an extremely condensed time scale, all on their own. This is a demoscene of hardware, with dozens of groups showing off what they can do with limited resources and limited time. If the Commodore and Amiga demo shows are the top tier of software developers, badgelife is the Olympics for hardware engineers. This is it, and it’s only going to get better from here.