In case you haven’t heard, the best hardware conference in the world was last weekend. The Hackaday Superconference was three days of hardware hacking, soldering irons, and an epic hardware badge. Throw in two stages for talk, two workshop areas, the amazing hallwaycon and the best, most chill attendees you can imagine, and you have the ultimate hardware conference.

Already we’ve gone over the gory details of what this badge does, and now it’s time to talk about the perils of building large numbers of an electronic conference badge. This is the hardware demoscene, artisanal manufacturing, badgelife, and an exploration of exactly how far you can push a development schedule to get these badges out the door and into the hands of eager badge hackers and con attendees.

The good news is that we succeeded, and did so in time to put a completed badge in the hand of everyone who attended the conference (and we do have a few available if you didn’t make it to the con). Join me after the break to learn what it took to make it all happen and see the time lapse of the final kitting process. 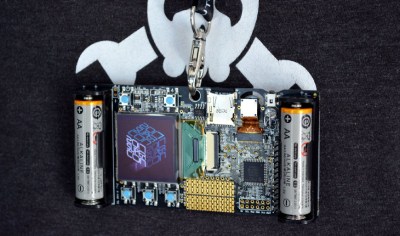 This badge was conceived and designed by [Mike Harrison] of mikeselectricstuff fame. This badge includes a camera, bright OLED display, accelerometer, microSD card support for storing all those pictures and videos, and enough pin headers for some serious hardware hacking. Not only did he donate his time and experience, but did an amazingly thorough job of documenting the entire project on Hackaday.io. Thank you so much [Mike]. We hope you will take the time to send him some well wishes on the badge design!

We also want to thank Microchip for donating the main microcontroller and SRAM chips, as well as Macrofab for donating some of their time and expertise as our contract manufacturer on the project.

Shipping electronic components around the planet is actually fairly horrible. This entire project went together very smoothly, but as with any hardware development project, there will be bumps in the road. What kind of bumps? Very annoying ones that could have completely derailed this project.

In our first teardown of building this year’s badge, I explained the dangers of single sourcing components from one random guy on eBay. We’ve sorted that out, but of course, there were more problems that cropped up. Remember, we weren’t changing the date of the Supercon, so these badges needed to be ready by a certain date. This gets complicated when you are making 500 of something, and sometimes means going to extreme measures.

The plan was to order the PICs for the main processor through MicrochipDirect because you can have firmware flashed before they are shipped. Unfortunately the lead time for programming these chips was several weeks, so we fell back on our backup plan: just ordering the chips and have the contract manufacturer burn the bootloader with a pre-programmed PICKit 3.

Here’s where things fell apart. On a Friday, three weeks before the Supercon, I got an email from Macrofab. The SRAMs arrived from Microchip, but the PICs were nowhere to be found. This caused great consternation as everything else was ready to go on the assembly line. The tracking number for the order told me the chips were somewhere between Thailand and Houston, Texas.

I called Microchip Direct, and they told me they would contact FedEx to figure out what was going on. But we needed a solution now. As a backstop to the is we ordered 500 pin-compatible PIC32 chips from from a distributor, shipped overnight to Macrofab. This is the third or fourth time I said, ‘whoops, we spent a few thousand dollars’ during the production of this badge.

Monday morning rolled around, and the PICs magically appeared at Macrofab. I called to cancel the order I placed Friday afternoon and everything was fine. The fire was extinguished.

For fun I also checked the FedEx tracking for the package full of PICs, and found these microcontrollers went from  Thailand to Alaska to Malaysia to Alaska to Taiwan to the FedEx Mother Brain in Memphis and finally to Houston. There is a reason you pay your logistics guy well.

Badges Rolling Off the Line

As Macrofab began sending badges through the ovens, it seemed for a moment that everything was alright and this would actually happen. Then we got an email. Badges were failing their self-test. 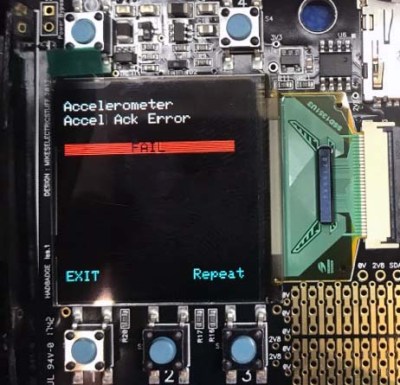 If you check out the official project repo for this badge, [Mike Harrison] did an excellent job on the firmware development for this badge. There’s a splash screen, video recording, and most relevant for Macrofab, a hardware self-test. It’s a boon for the assembly line at Macrofab — the only thing the assemblers need to do is connect the PICKit 3 programmer (no computer necessary), hit upload, and wait for the word ‘PASS’ to appear on the screen.

This ended up being just another outcome of buying parts with a short lead time. The badge prototypes used an almost identical part as the production version. The only difference, as far as we can tell so far, is that the part we told Macrofab to order has an I2C address of 3A 60. No problem, that’s just updating a single line of code in the bootloader and test firmware. Macrofab swapped out for the new firmware on their programmers and everything magically worked.

If you’ve never done any sort of artisanal manufacturing before, you really don’t realize how much time it takes to do one thing five hundred times. If you need to do a task once — take the trash out, or wait for a machine to finish, for instance — it really doesn’t matter if it takes one minute or three minutes. You can always make up those extra two minutes somewhere. If you need to do a task five hundred times, a one-minute task turns into a bit more than eight hours, or a full workday. A three-minute task done five hundred times is three workdays. This is a big difference.

Building a conference badge is filled with these one- to three-minute tasks. You need to depanelize the boards. You need to solder in a battery holder. You need to install the lanyard. You need to copy an SD card. You need to kit the badges. All of these, singularly and independently, are not a big deal. Put together, you might be looking at a man-month of work. You’ll want some friends or coworkers for these small tasks I’m now calling ‘piddlin’ crap’.

Logos, sample images, a few demo videos, and a backup copy of the stock firmware are all stored on an SD card. This is a fantastic way to plan for software development that’ll happen at the the con since the bootloader can flash hex files from the card to the microprocessor. But it does mean someone has to program those SD cards. How do you clone five hundred microSD cards?

We ended up going with one of these things. It’s a 1 to 15 SD card duplicator, basically a tiny tower stuffed with four, four-bay SD card slots, a control panel, and an FPGA. Put the SD card to be cloned in the upper left-hand slot, fill the other slots with blank cards, and press a button.

We were pleasantly surprised with how fast it was to clone the microSD cards for each badge. We had tested the cloner a few weeks before, and came up with a 14-minute run time to clone 15 cards. Add in two minutes for swapping out each card, and that’s a full work day of cloning SD cards. This is a fairly advanced SD card cloner, though, and this experiment was copying each and every block on the card. Since we’re only copying a few megabytes worth of graphics and videos, the actual cloning of the master SD card was much faster.

As you would expect, firmware development for the 2017 Supercon badge was happening right up until the last possible minute. We discovered on Tuesday morning that the sleep function wasn’t working. The power pin was floating as the microcontroller entered sleep and too much noise from the switching power regulation turned it back on.

[Mike] fixed this in software by using PWM on the switcher’s enable line to bleed off enough stored power to shut it all the way down. There was also a wrongly mapped pin in the bootloader menu that was fixed. These changes meant we needed to reflash all of the badges — but we were going to have to do that with the the final firmware version anyway. On Wednesday night, [Mike Harrison] turned the badge into an oscilloscope just hours before we had to start kitting.

Very few tasks can be parallelized. You can’t design a badge in parallel, and I don’t even know what that would look like. Is it one person designing the power supply, one person putting pull-ups for the I2C bus, and another doing the mechanical design, throwing everything together, and hoping a working circuit appears at the end? It wouldn’t work.

Kitting is one of the very few parallelizable tasks in building this badge. This started with 1000 AA batteries that needed to be liberated from their 4-packs of plastic shrink wrap and 10 cardboard boxes. Line up 200 batteries at at time in rows of 20, use a box cutter to score the plastic, and you can unwrap 8 at a time in about one second using both hands.

Macrofab shipped the badges each sealed in an antistatic bag, placing four together and wrapping in bubble wrap. We unboxed these, unwrapped them, cut open the bags and placed each on the table. SD cards were inserted, then batteries, before sliding them to [Mike] who was using four programmers at once, along with binder clips to hold down the badge power button during the ~10 seconds of programming. Don’t worry, we made a video of this which starts after we had already done about 160 badges. This is not [Mike’s] first rodeo and his guidance is all that made this feasible — one second of wasted time per unit adds up to almost 10 minutes of extra work.

In theory, designing and manufacturing a badge is easy. You need only open up a copy of Eagle or KiCad, push some wires around, and send the board off to a contract manufacturer. In practice, even the ‘easy’ way of doing things is incredibly hard. Supply chain management is a skill, and being able to plan a design is as important as doing the actual design of the design. Waterfall calendar graphs are your friend.

Nevertheless, we got our badge finished and out the door. Yes, there were a few problems along the way, but that’s only two or three more gray hairs on our head.

If you want to get your hands on one of these sweet badges, head over to Tindie before they’re all gone.

22 thoughts on “The Perils Of Developing The Hackaday Superconference Badge”