The Raspberry Pi is six years old now, and in that time it’s become the most popular single board computer. Over these last few years, the Pi has improved from a relatively anemic board based on a smartphone SoC to a surprisingly fast board that’s loaded up with some of the best software and the best community support we’ve ever seen. There’s an awful lot you can do with a Pi, and the continued support of the Raspberry Pi Foundation has enabled millions of people to get their hands on a cheap computer that runs Linux. It’s great.

Now it’s your turn to ask the engineers behind this tiny little computer what’s going on in the world of Pi. We’re having a Hack Chat this Friday, and you’re invited. 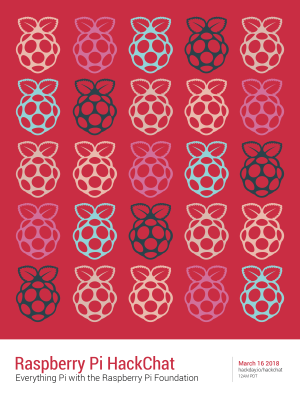 Our guest for this week’s Hack Chat will be [Roger Thornton], principal hardware engineer for the Raspberry Pi, where he oversees design, test, compliance, and production for Raspberry Pi products. Previously, [Roger]’s work for Broadcom included being part of the team that characterized and tested numerous SoCs including the BCM2835/6/7 found in various Pis. He also has experience in the smart home and IoT fields from working in a consultancy where be helped bring chips to market.

[Roger]’s most recent work was announced today; the Raspberry Pi 3 Model B+ is the latest in a long line of Pis, and while it’s not the octocore ARM monster with SATA and PCIe and Gigabit networking and 4G that the power-hungry have been clamoring for, it is more capable than its predecessor and still only costs less than forty bucks.

This is also the second time [Roger] has been a guest on our Hack Chats. You can check out the transcript of the 2017 chat here.

During this chat, we’re going to be discussing the future of Raspberry Pi products, Pi events around the world, and a question on the minds of many: where you can buy Pi Zeros in quantity. You are, of course, encouraged to add your own questions to the Hack Chat. You can do that by leaving the questions as a comment on this Hack Chat’s event page.

Our Hack Chats are live community events on the Hackaday.io Hack Chat group messaging. This week it’s going down at the usual time, on noon, Pacific, Friday, March 16th  Want to know what time this is happening in your neck of the woods? Have a countdown timer!