Hackers, Designers, and Engineers flooded into Dom Omladine on Saturday for what can only be described as an epic celebration of hardware culture. This is the second time Hackaday has organized a huge conference in Belgrade, and lightning really did strike twice.

A Gathering of New Friends and Old

We got things started off with a meetup the night before the conference. The first Hackaday Belgrade was held in 2016 and we didn’t reserve a bar on Friday night — we ended up taking over one just through sheer numbers. This year we called ahead for a large outdoor space, then made good use of it.

A great kickoff to the weekend

*No beers were wasted during this meetup

Everyone was giddy with anticipation of the next day to come. There is always a sizzling energy of meeting up in real life. Most of this group hangs out on Hackaday.io, but only some of them have met in person. Add to that the reunions of those who became friends at the previous Hackaday Belgrade and at other cons around Europe and you have the feeling of coming home. These really are your people.

Yes, a Conference. But the Cool Kind

Hackaday conferences are more than just parties… they’re conferences. If you approach it the right way you can get your employer on board with you attending because you’re going to meet incredible people, learn lots of stuff, and come back excited to take on the Universe. Actually, bring your boss along for the ride too!

Breakfast spread as the doors open

This year we had thirteen incredible talks. As is our practice, we started off with a super-technical talk as Rachel Wong (aka @konichiwakitty) discussed her Ph.D research which involves growing eye tissue in the lab. But like all incredibly brilliant minds, she has a creative outlet which she also covered as part of her Keynote address. Rachel has a passion for building wearables that are reaching for the future by embracing things we really do need in our garments and gear.

The workshop area full to the brim

From drone monitoring networks to robot soldering machines, and concepts for designing meaningful hardware to using code to automate tedious PCB layout, there was plenty in these talks for everyone.

Rachel Wong on the growing of eye tissue

I really enjoyed Elliot Williams’ talk on Logic Noise for his live demos using simple logic chips to build up complex music. Marcel van Kervinck took us on a journey of TTL computer design. And Sophi Kravitz’s talk on building non-rigid airships had at least two people at the con get inspired and spin their own blimp design during the conference! There was a live-feed of the talks so keep your eye on Hackaday as we pull those out to be featured individually.

The workshops were standing room only as people who weren’t able to grab a ticket audited the course. We had three hands-on session that built wearable circuitry, brough art to PCB design, and dove into the world of FPGAs.

Everyone through the door received a custom electronic badge to hack on during Hackaday Belgrade. Voja Antonic designed the hardware and oversaw the manufacture. We had excellent yield which is great because we had nearly (if not more than) 100% attendance at the conference. We ended the day with just 5 badges to spare! 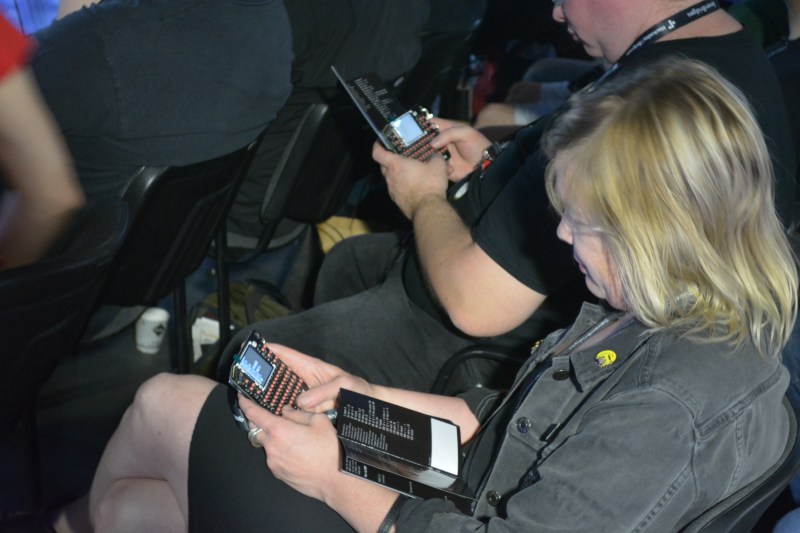 These handheld computers are truly hot! The badges each have 55 really clicky keys. With at least 350 people in the room, that’s approaching 20k momentary push switches and at one point, a brief “silence” fell and all that could be heard were clicking buttons. That and we asked everyone to play the Mario Overworld tune at the same time as hundreds of badges rose in a glorious chorus. There’s also a 16-page user manual to go along with them which included sample code to get started. 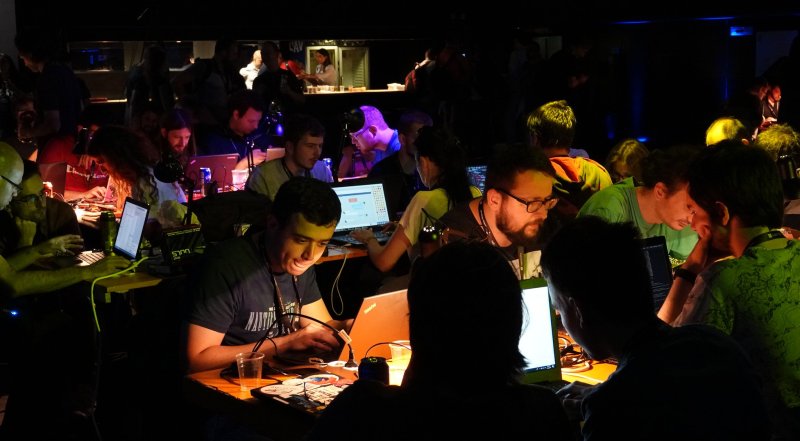 Hacking went on throughout the day but as the talk session wrapped up we transformed the hall into a Hacker Village. Tables were brought in and immediately filled. Live music filled the room as Bogdan Rosu and Richard Hogben each played IDM sets. If you’ve been watching Hackaday videos you’ve heard their work and their performances this night were epic.

What is better than hacking to live music?

So much hacking, so little time

There were other hardware demos on display too

This badge was put on WiFi by lunchtime

Detail of [Larissa Koncz]’s Interactive Poetic Glove from the workshop

So much ASCII art!

[Frederic] and [Manoel] got their badges talking over AFSK, when the RF interference didn’t get them…

The RevSpace crew at work in the quiet workshop room

There was food, there was beer, and there were the tools of our lifestyle; laptops, programmers, jumper wires, blinky add-ons, and the excitement that goes along with all of them. The badge hacking presentations began at midnight and the place was still alive with excitement. It is truly great to see how supportive our community is of exploring hardware and trying things out. Publish your badge hacks and stories from the conference on Hackaday.io as we’ll be featuring those in the coming days and want to make sure we have all the juicy details.

Keep your eye on Hackaday as there is much more coverage to come on this wonderful event. Many have asked: “Why Belgrade?”. It’s a fantastic city and the engineering community in the area is passionate about getting together to learn and share ideas. This includes the Supplyframe engineers who live in Belgrade and did the heavy lifting to organize and staff Hackaday Belgrade. You all did an amazing job and everyone at the con owes you a debt of gratitude, thank you so much! We also want to thank Supplyframe and SevenBridges, our sponsors for the event. 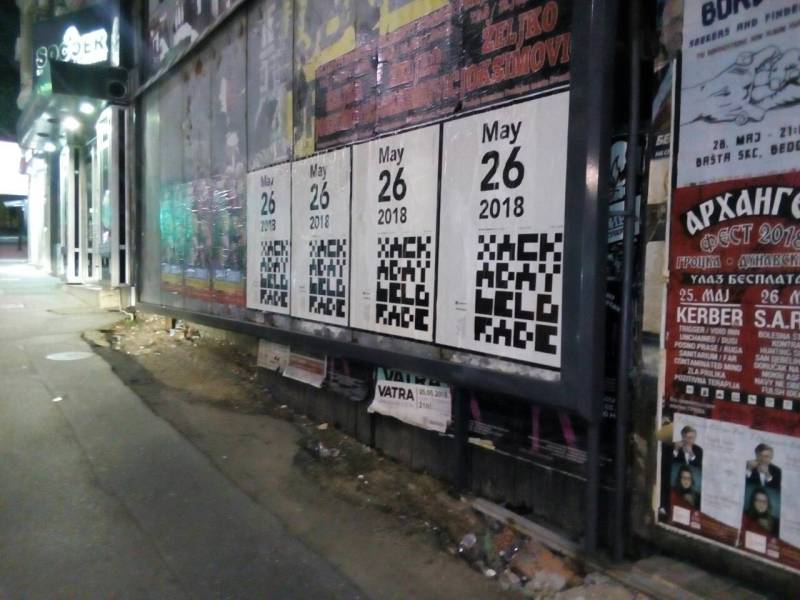 To all who attended, it wouldn’t have happened without you! I can speak for everyone on the Hackaday crew in saying the culture we share is energizing, encouraging, and humbling. It’s exactly the kind of recharge everyone looks for to keep life interesting! We’ll see you at the next one. Now over the next five months we have our sights set on the Hackaday Superconference. See you there!