In the early 1970s, the American space program was at a high point, having placed astronauts upon the surface of the moon while their Soviet competitors had not taken them beyond an Earth orbit. It is however a simplistic view to take this as meaning that NASA had the lead in all aspects of space exploration, because while Russians had not walked the surface of our satellite they had achieved a less glamorous feat of lunar exploration that the Americans had not. The first Lunokhod wheeled rover had reached the lunar surface and explored it under the control of earth-bound engineers in the closing months of 1970, and while the rovers driven by Apollo astronauts had placed American treadmarks in the  lunar soil and been reproduced on newspaper front pages and television screens worldwide, they had yet to match the Soviet achievements with respect to autonomy and remote control.

At NASA’s Jet Propulsion Laboratory there was a project to develop technology for future American rovers under the leadership of [Dr. Ewald Heer], and we have a fascinating insight into it thanks to the reminiscences of [Mike Blackstone], then a junior engineer. 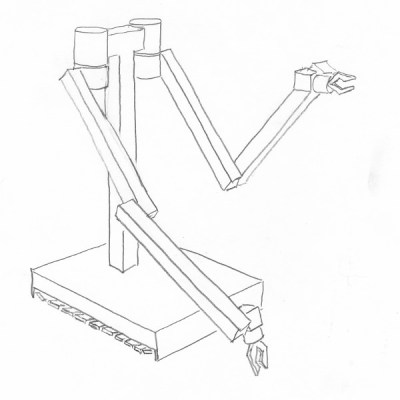 The aim of the project was to demonstrate the feasibility of a rover exploring a planetary surface, picking up, and examining rocks. Lest you imagine a billion dollar budget for gleaming rover prototypes, it’s fair to say that this was to be achieved with considerably more modest means. The rover was a repurposed unit that had previously been used for remote handling of hazardous chemicals, and the project’s computer was an extremely obsolete DEC PDP-1.

We are treated to an in-depth description of the rover and its somewhat arcane control system. Sadly we have no pictures save for his sketches as the whole piece rests upon his recollections, but it sounds an interesting machine in its own right. Heavily armoured against chemical explosions, its two roughly-humanoid arms were operated entirely by chains similar to bicycle chains, with all motors resting in its shoulders. A vision system was added in the form of a pair of video cameras on motorised mounts, these could be aimed at an object using a set of crosshairs on each of their monitors, and their angles read off manually by the operator from the controls. These readings could then be entered into the PDP-1, upon which the software written by [Mike] could calculate the position of an object, calculate the required arm positions to retrieve it, and command the rover to perform the required actions.

The program was a success, producing a film for evaluation by the NASA bigwigs. If it still exists it would be fascinating to see it, perhaps our commenters may know where it might be found. Meanwhile if the current JPL research on rovers interests you, you might find this 2017 Hackaday Superconference talk to be of interest.

Thanks [JRD] for the tip.

3 thoughts on “Robot Rovers Of The Early Space Race”