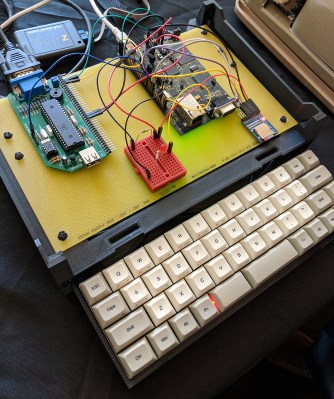 During the second AI renaissance in the 1980s, researchers had a powerful language at their disposal. Lisp was the language of AI in the 80s, and there were even purpose-built machines built to run Lisp fast. You haven’t lived until you’ve had a Symbolics Lisp machine under your desk. Of course, AI died once someone realized you could make money on the Internet, and the idea of a machine designed to do Lisp died alongside.

For his exhibit at VCF West, [Luther] presented his own design for a modern Lisp machine, and a great idea for homebrew computers in general. He’s developed a modular computer system that makes far more sense than a backplane design, and has a functional 3D printed enclosure.

The hardware for the CP/Maker machine is a business card sized board with a Zilog eZ80 running at 50 MHz with 16Mb of RAM. A Propeller handles the VGA, while a PIC32 handles the keyboard and USB communications.

That business-card sized board is rather unique for using the eZ80, as this is the first chip in the line to get an address space that makes sense. The software includes MakerLisp, [Luther]’s own dialect of Lisp, and an expanded CP/M system. Although the prototype system was shown at VCF West last weekend, [Luther] tells me the boards for the final revision are coming in and he should have a demo in about a week.

The Most Beautiful Computer Ever Made

The DEC microcomputers of the 70s are by far the most beautiful computers ever made. Not only were they capable and almost infinitely expandable, they all came clad in beautiful front panel artwork with Harvest Gold, Avocado, and Mauve color schemes. Yes, somewhere in Cambridge, Massachusetts an engineer said the word ‘mauve’.

We’ve already seen a bunch of mini reproductions of classic mini and microcomputers, but the one we’ve been waiting for is finally out. At this year’s VCF West, [oscar] has one of the first production units of the PiDP 11/70. It’s a 6:10 scale reproduction of the famous PDP-11/70, the King of PDPs, and is clad in injection molded bezels, toggle switches, and astonishing front panel artwork. With a Raspberry Pi and SIMh, it’s also a completely functional replica of a PDP-11/70. Yes, you could probably connect to a vampire tap Ethernet network with this thing. I’m sure you could connect an RL02 disk drive somehow. 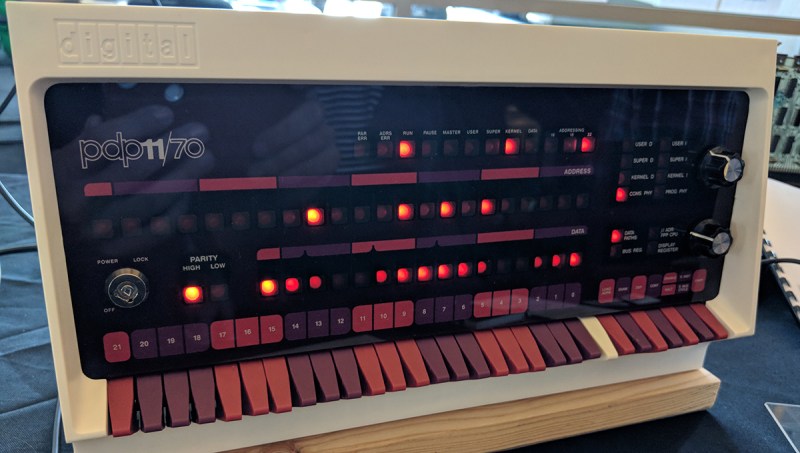 This project is a follow-up to [Oscar]’s earlier PiDP-8/I project, a 2:3 scale reproduction of the PDP-8/I. Under the hood, the PiDP 8 is a Raspberry Pi plugged into a circuit board with a bunch of LEDs and switches, that completely emulates the experience of running a real DEC micro.

The PiDP-11/70 is [oscar]’s latest project, and one that’s two years in the making. This modern recreation features an injection molded plastic bezel and toggle switch tips perfectly color matched to original DEC hardware. It’s a labor of love, and yes, you can buy one right now. [oscar] has already shipped 100 of these guys around the world, and there is a mailing list for anyone who would like to buy one.